Berlin Tegel displays with pride ‘Arch of Triumph’ certificate; another win for Europe in this week’s competition 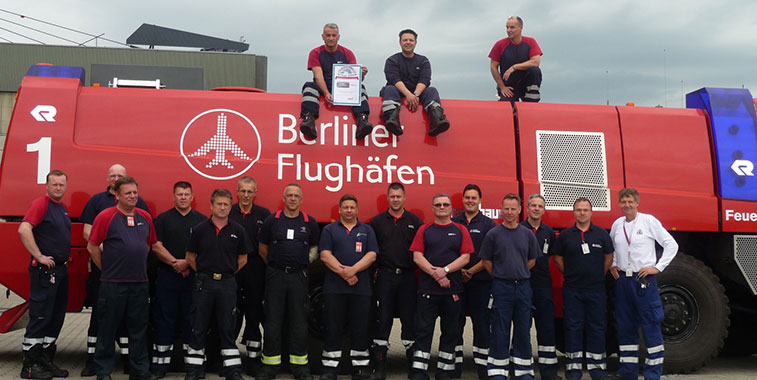 This is the first time a fire crew has gone to the heights of taking the ‘Arch of Triumph’ certificate onto the top of a tender for added drama. Wunderbar Berlin Tegel Airport!!

Berlin Tegel came very close to repeating a very rare feat this week, as it nearly achieved back-to-back wins in consecutive weeks in the anna.aero ‘Arch of Triumph’ competition, coming second to a fine FTWA from Budapest. Not since May 2014 has this been accomplished, when the small UK regional airport in Cambridge delivered two world beating FTWAs in successive weeks for route launches from Verona (Etihad Regional) and Amsterdam (CityJet). Prior to that Tampa Airport, which now seems to have dedicated its marketing resources to route launch cakes, also won two weekly titles in December 2013. The win also sees Europe extend its lead at the top of the inter-regional table, having now secured 46% of all weekly titles. Keep Monitoring!!

Air China Bejing to Budapest (via Minsk) 1May 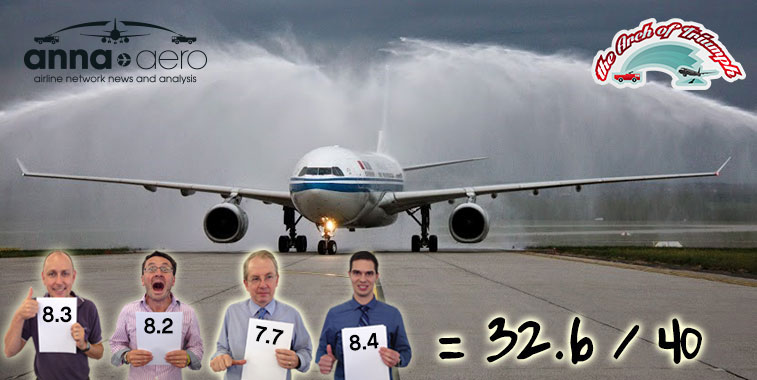 The grey skies of Budapest could not keep this FTWA down…

Judge’s Comments: Clearly last year’s training at the Budapest fire station, performed by anna.aero Editor and FTWA judge Marc Watkins, is still paying off for the Hungarian airport, as it celebrates its first win of 2015 and third place on the overall leader board with this effort. 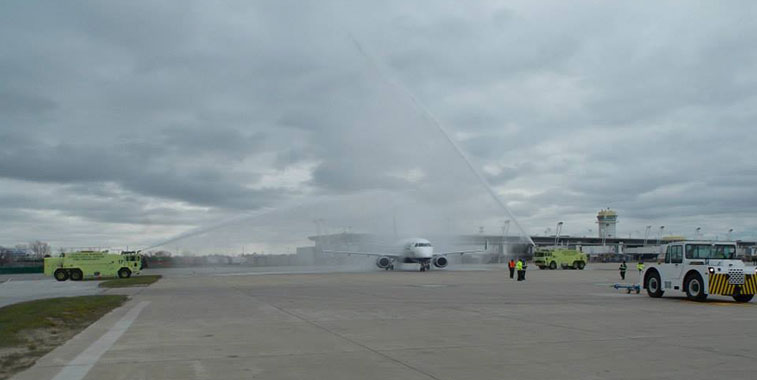 Helping to avert a bird strike on the ground…

Judge’s Comments: Was there a bird that the right-hand tender was aiming at to prevent a dangerous engine ingestion? No-one may ever know, but the resulting FTWA is hilarious – and made the anna.aero judges laugh out loud! 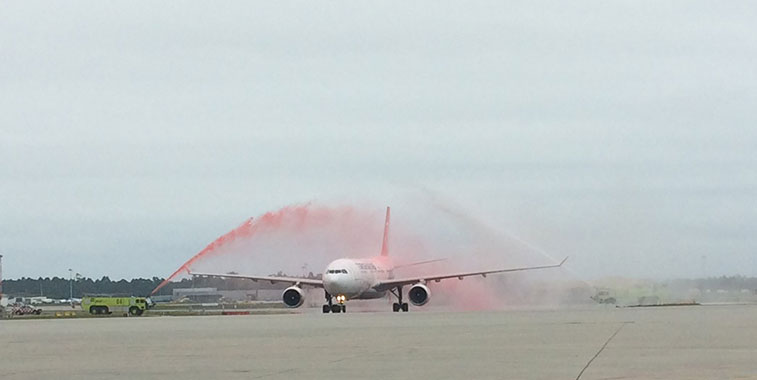 Judge’s Comments: We love the fact that airports are adding colours to their water jets. However, it is still worthwhile practising the basics first, like creating an arch!! That said maybe the fire crews in Porto were distracted by the fact that an A330 turned up on the inaugural rather than the expected A319 or 737-800!! 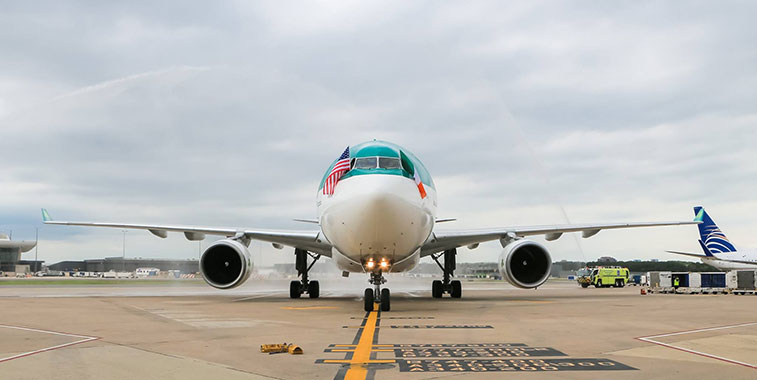 Judge’s Comments: Luck is not a part of a top quality FTWA. It’s all about skill and precision ‒ two factors sadly lacking in the US capital this week. Maybe they didn’t want to get the flags wet??? 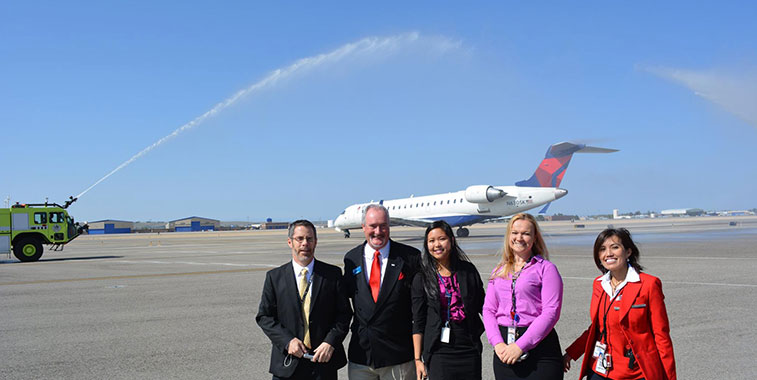 Judge’s Comments: The craze of ‘photobombing’ (Google it if you’re unsure) has finally hit airport marketing images of FTWAs. I guess it had to happen at some point. Unfortunately for the guys in Boise, anna.aero judges are (mainly) of a certain age where they do not prescribe to such new-fangled trends and vogues and this is reflected in the somewhat low scores. 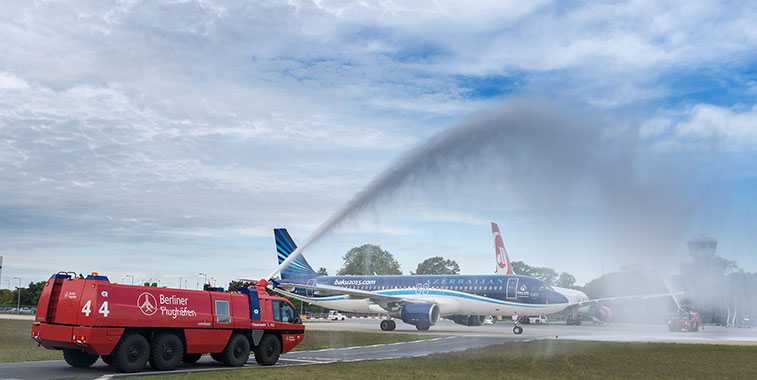 Judge’s Comments: This was very nearly two wins in consecutive weeks for Berlin Tegel. This feat has only been achieved twice before, by Cambridge Airport in May last year and Tampa Airport in December 2013.

Blue Air Constanta to Milan/Bergamo 2 May 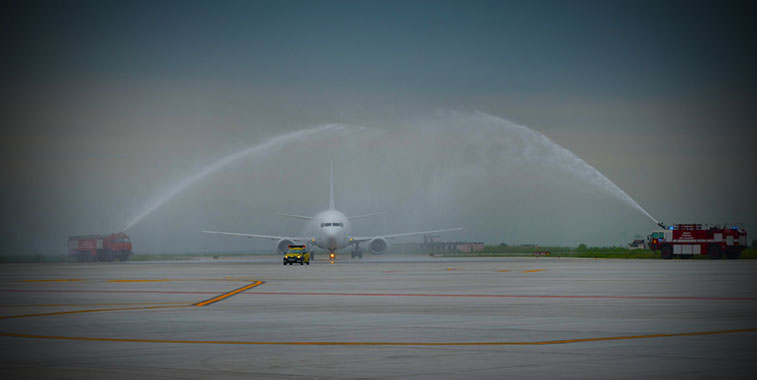 Judge’s Comments: Some days you jump out of bed, full of the joys of Spring…and other days your hand hovers over the phone…poised to ring your boss…as you try to come up with a plausible excuse for a duvet day. On 2 May in Constanta it was definitely a duvet day…not that this stopped a fine first time effort from the Romanian airport.

Air Cairo Hurghada to Hannover 3 May 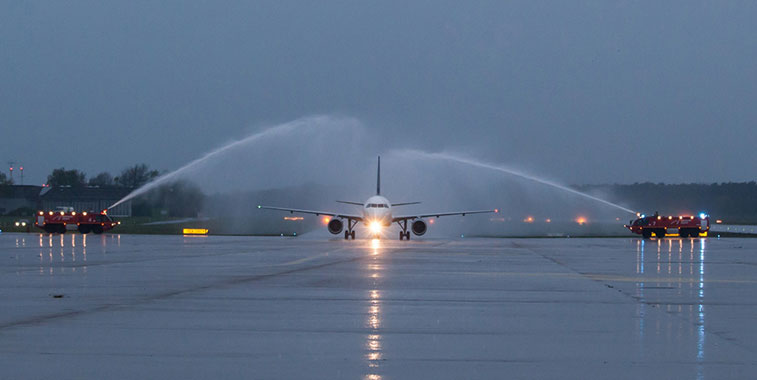 Weather forecast for Hannover – rain, with water jets in between, followed by more rain…

Judge’s Comments: It’s 1,650 kilometres from Constanta to Hannover…while this is a long way, it’s clearly not far enough for the same rain cloud in Romania to have made its way above the apron of the Northern German airport a day later. And they say it rains in the UK…pah! 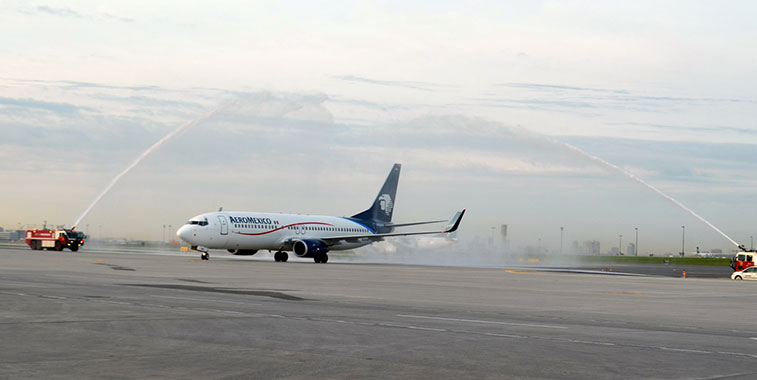 Arriba, arriba! A speciality FTWA on show in Canada…

Judge’s Comments:  The firefighters at Toronto Pearson have lovingly created an FTWA style known in Mexico as the ‘tortilla’ to celebrate the start of Aeromexico’s new service from Mexico City. While this type of arch is much-admired in Mexico, gringos very rarely capture its true spicy nature…a fact which is reflected in the wide range of scores awarded.