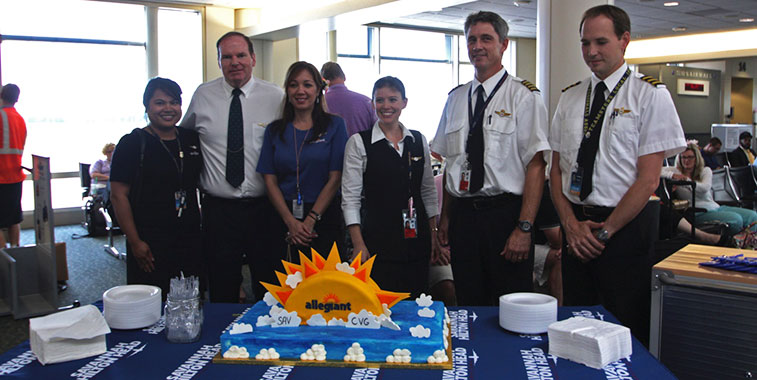 On 8 May, Savannah Airport welcomed the arrival of Allegiant Air’s twice-weekly flights from Cincinnati with a cake ceremony in the terminal. On 6 May, Raleigh-Durham Airport celebrated the arrival of Allegiant Air, with three new routes from St. Pete-Clearwater, Orlando Sanford and Punta Gorda, all of which are served twice-weekly. Marking the achievement are Raleigh-Durham’s: Dickie Thompson, Board Chair; Tommy Hunt, Board Member; and Michael Landguth, President and CEO. On 7 May, Tulsa Airport, serving the second-largest city in the State of Oklahoma celebrated the start of Allegiant Air’s twice-weekly departures to St. Pete-Clearwater. Passengers on the inaugural flight were treated with pies in front of the Golden Driller. Cutting the ribbon are: Jeff Mulder, Director, Tulsa Airport; and Kurt Harvey, Station Manager at Tulsa, Allegiant Air.