Record April for Airbus and Boeing; easyJet receives its 250th A320 family aircraft On 22 April, easyJet and Airbus celebrated their successful partnership at a ceremony in Hamburg to mark the delivery of the airline’s 250th A320 family aircraft. To celebrate this achievement, easyJet unveiled its newest A320 with a unique livery featuring 250 miniature aircraft. As with other recent deliveries to easyJet, the A320 is equipped with the latest technology and fuel-saving sharklets. The British LCC operates Europe’s largest and the world’s fourth largest Airbus single-aisle fleet.

Following the 123 airframes handed over in March, Airbus and Boeing stepped up their deliveries in the fourth month of this year. Besides the fact that the American manufacturer maintains its leading position over Airbus in terms of aircraft delivered in April, Boeing continues to lead the 2015 delivery race by 54 units (up from 50 in March). When compared to the first four months of 2014, the two producers managed to increase their combined deliveries by 36 units, with 446 aircraft incorporated by carriers into their respective fleets so far in 2015.

Having delivered more than 100 aircraft for the third time in 2015, the two manufacturers have once again recorded an impressive score. The combined deliveries of both producers for the fourth month of the year, was 128, of which 66 came from the American manufacturer, and 62 from its European counterpart, making it the best April since anna.aero started tracking aircraft deliveries in 2008. Notably, both producers enhanced their performance when compared to the same month last year, with Airbus delivering 10 more units, while Boeing also handed over 10 more airframes. All in all, 73% of all April deliveries were narrow-body aircraft, which is up 4% from March’s figures. 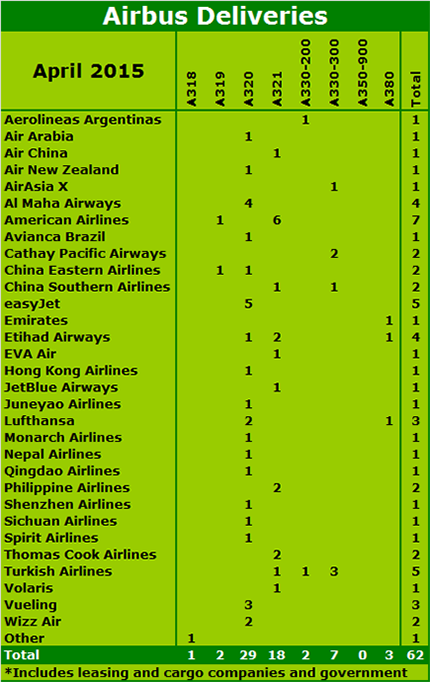 Airbus ended April with a total of 62 units delivered to airlines, which constitutes 10 more airframes than the amount delivered in March, as well as 10 more than in the corresponding month last year. Over the four completed months of 2015, the European producer delivered 196 units, representing an increase of 1.6% (two more units) on the same period of 2014.

Once again, single-aisle deliveries in April were led by the A320 (29 units) with 50 single-aisle aircraft provided to carriers around the world. The oneworld member, American Airlines (which finalised its merger with US Airways on 31 December 2014), was one of five airlines to receive more than two narrow-body units from Airbus, as it incorporated six A321s and one A319 into its fleet. Apart from this, other noteworthy carriers to receive more than two units were easyJet (five A320s), Vueling (three A320s), Etihad Airways (two A321s and one A320), as well as Al Maha Airways (four A320s). In addition five other carriers saw two Airbus narrow-bodies join their respective fleets in April – Wizz Air, Thomas Cook Airlines, Philippine Airlines, Lufthansa, as well as China Eastern Airlines. Interestingly, Al Maha Airways – Qatar Airways’ latest subsidiary that will compete with Saudi Arabian Airlines and flynas in the Saudi domestic market – took delivery of its first aircraft on 22 April.

Looking at wide-body deliveries, Airbus handed over 12 airframes in April, accounting for two more units than in the preceding month, but the same amount as in the corresponding month of 2014. Following March’s delivery of two A380s, the European producer handed over three units of the type in the fourth month of 2015, one to the largest operator of A380s — Emirates, and one each to Lufthansa and Etihad Airways. Also interestingly, no A350-900 was delivered to airlines in April. 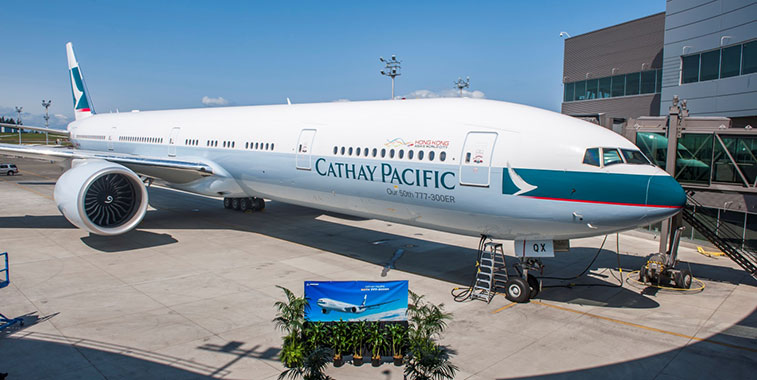 On 30 April, Cathay Pacific Airways celebrated the delivery of its 50th 777-300ER. With this delivery, the Hong Kong-based carrier will have 67 777s in operation, which also includes 12 777-300s and five 777-200s. Cathay Pacific is slated to receive three more 777-300ERs by the end of the year. Commenting on the delivery, Ivan Chu, CEO, Cathay Pacific, said: “The 777-300ER forms the backbone of our long-haul fleet. We operate the largest 777-300ER fleet in Asia, and this super-efficient long-haul aircraft allows us to operate multiple daily frequencies to intercontinental markets, which gives our customers a lot of choices.” 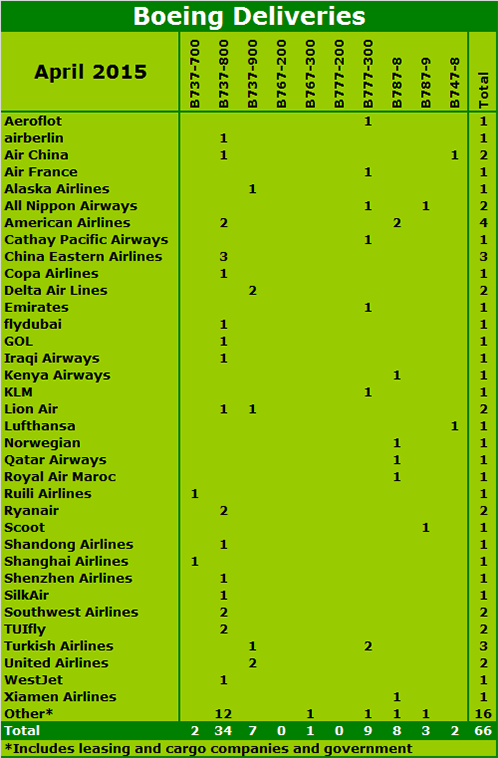 Analysis of the wide-body deliveries reveals that Boeing handed over a total of 23 units to airlines in April, five fewer than in March. Moreover, the American producer bettered its year-on-year performance, delivering six more wide-body units than the 17 it managed in the corresponding month of 2014. Following eight and six 787-8s delivered to airlines in February and March, Boeing handed over a total of eight units of the type reaching customers in the fourth month of 2015. In addition, three 787-9s were received by airlines, including one each to All Nippon Airways and Scoot.