AirAsia now serves over 60 destinations from its main Kuala Lumpur base; almost 75% of flights compete directly with Malaysia Airlines AirAsia as we know it today launched its no-frills operation from Kuala Lumpur’s main airport (KLIA) in early 2002. Just 13 years later, the airline is poised to overtake Malaysia Airlines as the biggest carrier (in terms of weekly seats) at the country’s busiest airport. Last week, AirAsia launched its latest new route from the airport, to Visakhapatnam in India, its 62nd destination in total, and seventh in India. 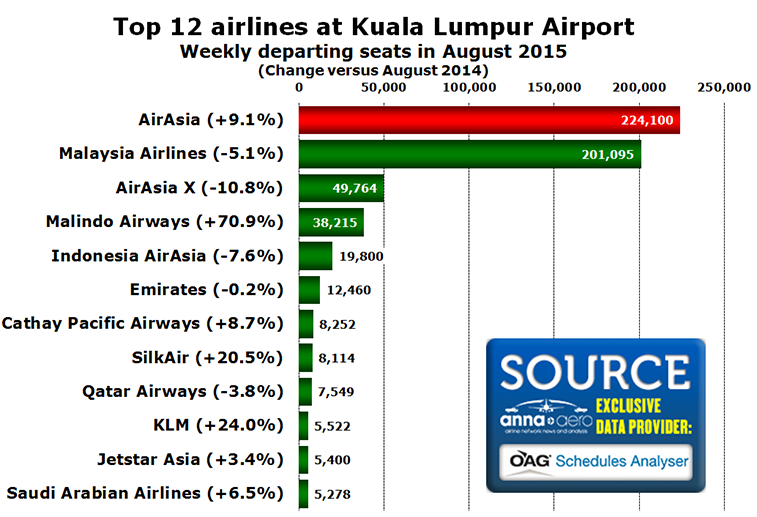 Almost 300% growth in the last decade

Between 2005 and 2015, AirAsia’s seat capacity at KLIA has increased almost fourfold from just under three million departing seats per annum to almost 11.5 million. After annual growth of more than 20% up until 2009, capacity has grown at a slower rate in recent years and even experienced a tiny decline in 2014. Capacity growth is currently planned at around 5% for this year. 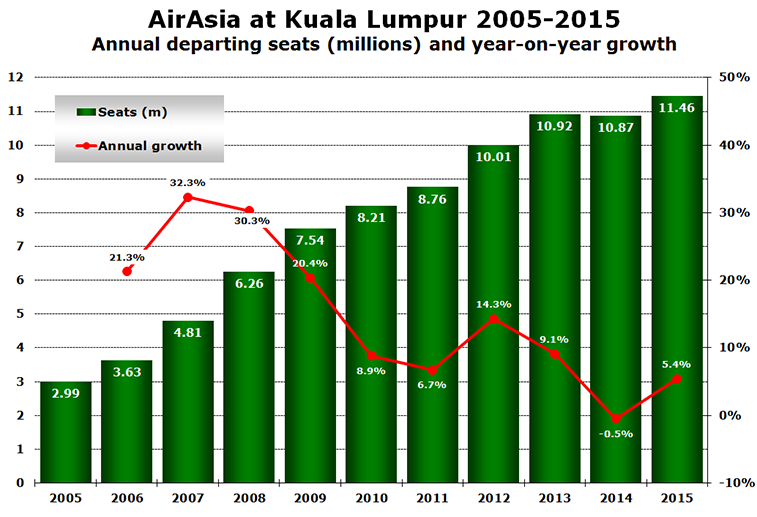 The number of destinations served from KLIA virtually doubled between 2005 and 2009 from 27 to 52. Since then the rate of adding new destinations has slowed and by the end of this year it will have increased by just a dozen more to 64. Of these 35 will be served with at least twice-daily flights. Apart from Visakhapatnam, AirAsia plans to add two further new destinations this summer, to Manila in the Philippines and Malé in the Maldives. Relatively few routes have been abandoned over the last decade, but these do include Bangkok Suvarnabhumi (replaced by flights to Bangkok Don Mueang), Colombo (now operated by AirAsia X), Dhaka in Bangladesh, Haikou in China, Kuantan and Manado in Indonesia and Thiruvananthapuram in India. 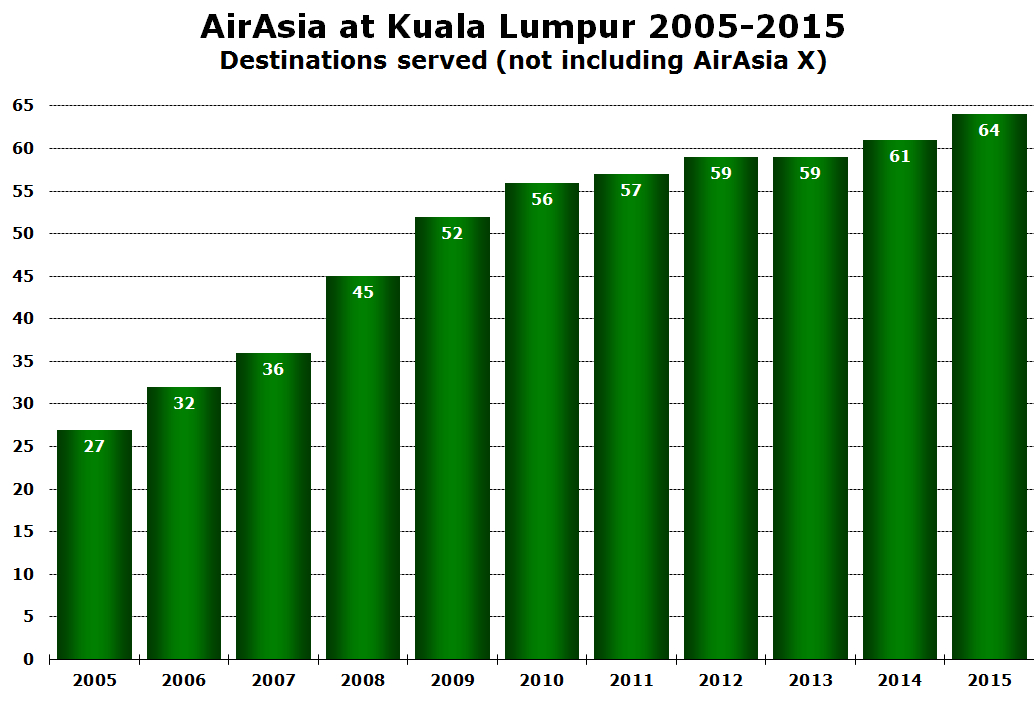 Domestic/international split is close to 50:50

Domestic routes account for just under 47% of all weekly seats this summer for AirAsia at KLIA, down slightly from just under 48% in the corresponding period last year. Indonesia and Thailand (where AirAsia is involved in joint ventures to create local carriers) are the two leading international markets, followed by Singapore, India and China. In total, AirAsia operates international flights from KLIA to 14 countries outside of Malaysia, the only new addition in 2015 being the Maldives. Service to Malé is scheduled to begin in July. 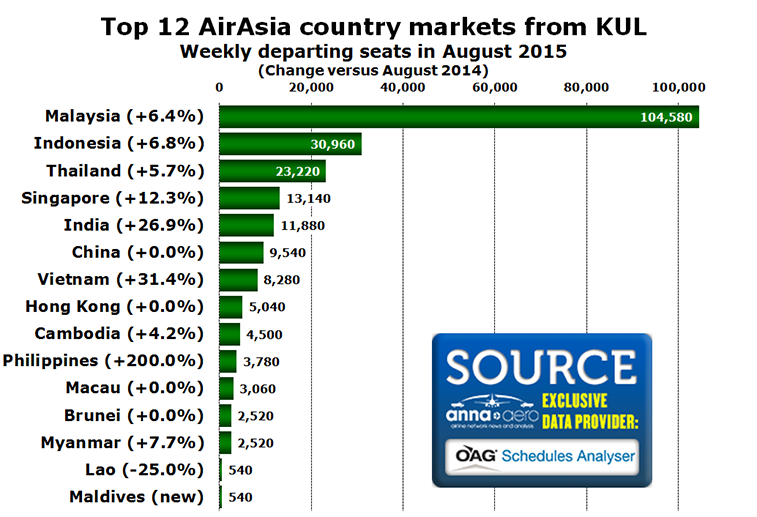 Competition with Malaysia Airlines on almost three-quarters of all flights

Schedule data for this August shows that AirAsia will be serving 64 destinations non-stop from KLIA while Malaysia Airlines will be operating directly to 59 destinations. The number of destinations which both airlines serve is 32. While this is only half of all the routes flown by AirAsia, these 32 routes represent 74% of AirAsia’s seats and flights at KLIA. For Malaysia Airlines the corresponding figures are 70% of flights and 61% of seats. AirAsia’s next two new routes from KLIA, to Malé in the Maldives and Manila in the Philippines, are both currently served by Malaysia Airlines. 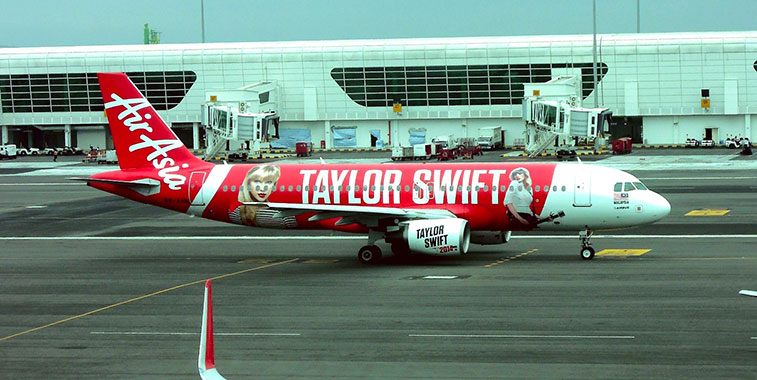 AirAsia founder and Group CEO Tony Fernandes worked for over a decade in the music industry and has been happy to use his aircraft as logojets for a variety of musical acts. Taylor Swift’s RED tour in 2014 included a number of Asian venues last June, including Kuala Lumpur, as well as Bangkok, Jakarta, Manila and Singapore.