On 1 May, Delta Air Lines continued its domestic expansion from Seattle-Tacoma Airport, this time with 26 weekly departures to Boise, the capital and most populous city of the US state of Idaho. Flying in competition with Alaska Airlines’ 64 weekly flights, Delta is using its CRJ 700s on the sector.

The Seattle area is home to several legendary brands such as Boeing, Microsoft and Starbucks as well as being the location for TV show Frasier. The primary gateway to the region is Seattle-Tacoma Airport (often referred to as Sea-Tac for simplicity), which is classified as the busiest airport in the Pacific Northwest region of North America. In fact the airport, which is located in the eponymous city of SeaTac, Washington, is home to Alaska Airlines and its subsidiary Horizon Air, but operates as a hub and international gateway to Asia and Europe for Delta Air Lines, which has expanded massively since 2011. In fact, the SkyTeam member has added two more domestic airport pairs from Seattle-Tacoma, to Boise and Sacramento on 1 and 4 May respectively, both of which are also served by Alaska Airlines. 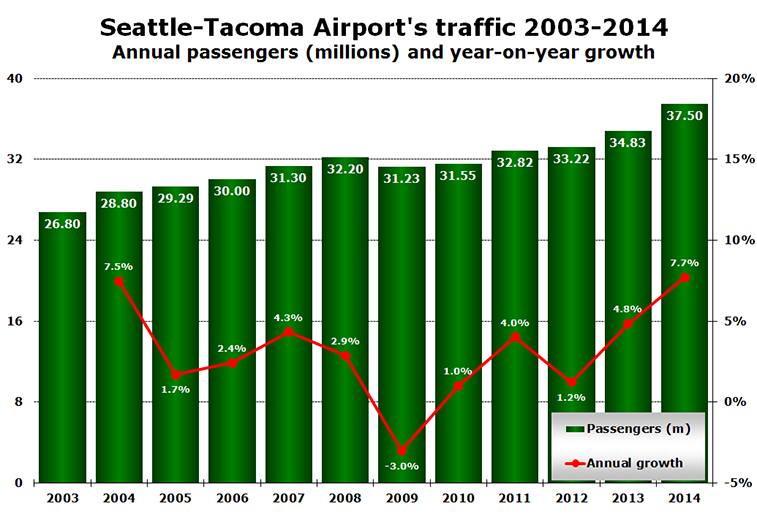 Analysis of data facilitated by the Port of Seattle reveals that Seattle-Tacoma’s traffic has continuously increased between 2003 and 2014, with the exception of 2009, when a modest decrease of 3% was noted due to the global economic recession strongly affecting US air travel. As a matter of fact, its passenger numbers increased with an annual growth rate (measured in CAGR) of 2.8% over the 2003-2014 timeframe. Seattle-Tacoma handled 26.8 million passengers in 2003, a number that grew to a record of 37.5 million last year. The airport’s growth rate of 7.7% ranked it as the fastest-growing among the top 20 airports in the US last year, and helped it pass Orlando and New York Newark to move into 13th place overall. So far in 2015, its growth of 13% has been considerably better than most other major US airports. 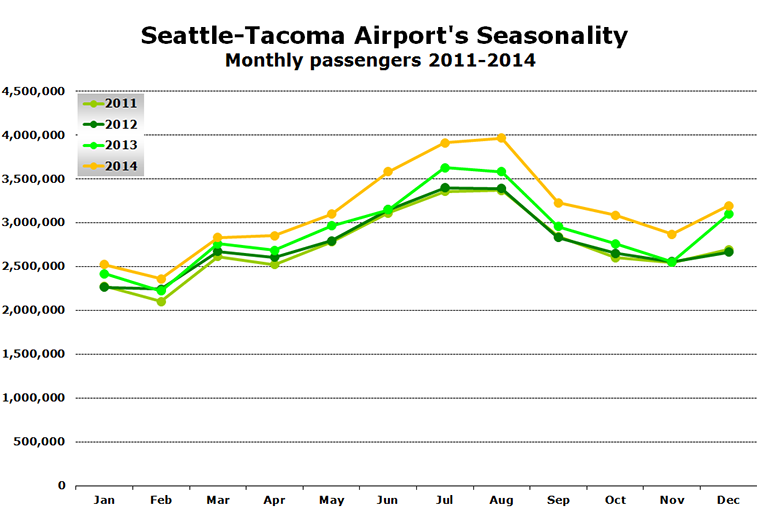 Entering Seattle-Tacoma’s monthly passenger data for 2014 into anna.aero’s Seasonal Variation in Demand (SVID) calculator, the airport performs well, generating a score of 2.80, a “good rating”. With almost 30 seasonality performance evaluations completed so far this year, Seattle-Tacoma has entered the rankings at #18 spot overall, lodging itself between Casablanca (2.46) and London Stansted (3.49). Nonetheless, the airport’s seasonality profile is very consistent with demand peaking in July and August and is at its lowest in February. The peak to off-peak ratio is around 1.7 (August to February).

Alaska Airlines and subsidiary Horizon Air command over 50% of capacity

Evaluation of OAG scheduled data for this May indicates that a total of 22 airlines are serving Seattle-Tacoma, with Alaska Airlines maintaining its top position. Like Europe’s airberlin, the carrier’s name became increasingly inappropriate as its route network has diversified. Alaska Airlines’ origins may have been based on flying to and from Alaska, but the company’s headquarters and its biggest operational base is at Seattle-Tacoma, in the state of Washington. In fact, Anchorage (its largest base in Alaska) ranks just third among the airline’s busiest airports based on weekly capacity this May, with only two other Alaskan airports (Juneau 11th and Fairbanks 12th) making it into the airline’s top 15 airports. Perhaps Washington Airlines is now a more appropriate name?!

As the airport’s biggest operator, Alaska Airlines along with its regional subsidiary Horizon Air, carried 51% of all passengers in 2014 (19.3 million), while Delta accounted for 14.5% of these numbers (5.4 million). Looking at scheduled data for this month, Alaska commands 50% and 55% of all seats and flights respectively and operates a total of 73 airport pairs from Seattle-Tacoma, of which Portland is the most frequently flown destination, being served with 175 weekly departures. Contrarily, Delta, which accounts for 20% of all weekly seats and flights, links Seattle-Tacoma to 33 destinations, with San Francisco being the most frequently served point with seven daily flights. 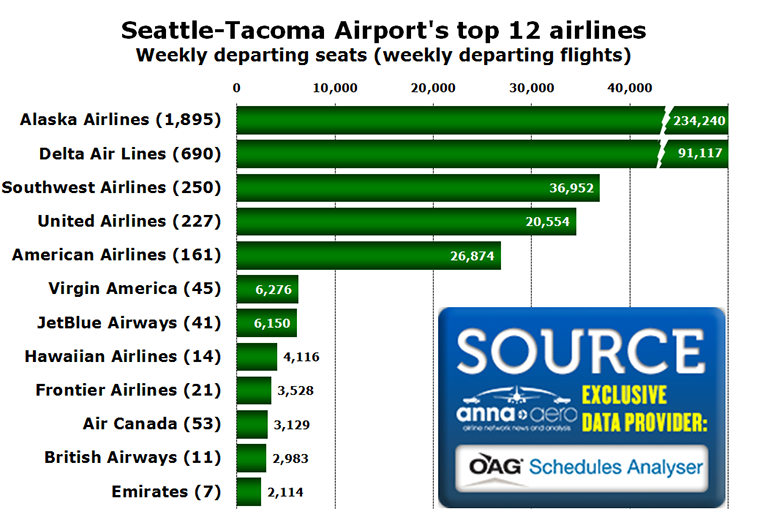 Weekly seat capacity for this May has gone up 15% (when compared to the same week last year), with four of the top dozen carriers recording capacity growth, while Hawaiian Airlines, Air Canada and Emirates saw their operations unchanged. In addition, US Airways’ operations have been absorbed by American Airlines as part of their merger which was finalised in December 2014. Hence, American — ranking fifth this year — posted massive increase of 58% this May. On the other hand, JetBlue Airways (-23%), Frontier Airlines (-21%), Virgin America (-13%), United Airlines (-9.1%) and British Airways (-7.3) have all posted capacity decline when compared to the corresponding week last year.

Nonetheless, Delta is the fastest growing carrier at Seattle-Tacoma with an annual increase in weekly seats of 68%, due in part to having introduced 16 new airport pairs over the past 12 months, including daily flights to Hong Kong and Seoul Incheon as well as 27 weekly departures to Vancouver. Interestingly, 12 of these new airport pairs are already served by Alaska Airlines, which highlights the SkyTeam member’s desire to slowly attack Alaska Airlines’ domestic network from Seattle-Tacoma.

Therefore, Alaska Airlines has come under growing pressure at the airport from Delta, which wants to make Seattle-Tacoma a major gateway for its Asian routes. However, the obvious plan of coming to an agreement with Alaska Airlines to provide short-haul feed for its long-haul routes has not proved appealing enough to the local carrier, and so Delta has rapidly been growing its short-haul network at the airport, overlapping significantly with Alaska Airlines. In conclusion, the two airlines are now competing on a total of 44 airport pairs from Seattle-Tacoma. While Delta has expanded with a total of 16 new routes over the past 12 months, Alaska Airlines has also introduced six links, to New Orleans, Washington Dulles, Tampa, Baltimore/Washington, Detroit as well as Albuquerque.

Seattle-Tacoma is lined up to host Airports Council International-North America’s (ACI-NA) JumpStart® Air Service Development Conference that will take place in Seattle, Washington, from 1-3 June 2015. Located at The Westin Seattle, the event (concentrating on route development within the North American continent) will commence with a full day of educational sessions, followed by two days of airport-airline meetings. anna.aero is going to be part of this conference for the first time as an official media partner, providing air service development magazines to delegates, which will include around 200 airports as well as most of the major carriers from the region, such as American, Spirit Airlines, Volaris, Air Canada, WestJet, Porter Airlines and many others. In the run-up to this event, anna.aero caught up with Kevin Burke, ACI-NA President and CEO to discuss his plans and expectations for this year’s conference.