On 18 October, tame – that controls 37% and 40% of seats and flights respectively at Quito Airport – celebrated with a ribbon cutting ceremony and a press conference, the launch of daily flights to Fort Lauderdale, its second US destination after New York JFK.

Located in the Tababela parish, about 18 kilometres east of the capital of Ecuador, Quito Airport (perhaps better known as Mariscal Sucre International Airport) is the primary international gateway to the country. Established in February 2013 to replace the old gateway, the airport caters for a population of three million and serves as the largest hub of tame, the flag carrier of Ecuador that operates around 200 weekly departures this May. Operated by Quiport, the airport controls 46% of the country’s scheduled seat capacity (being followed by Guayaquil with 36%) and offers non-stop flights to 25 destinations in 11 countries within the Americas and Europe (according to OAG Schedules Analyser data for this May). 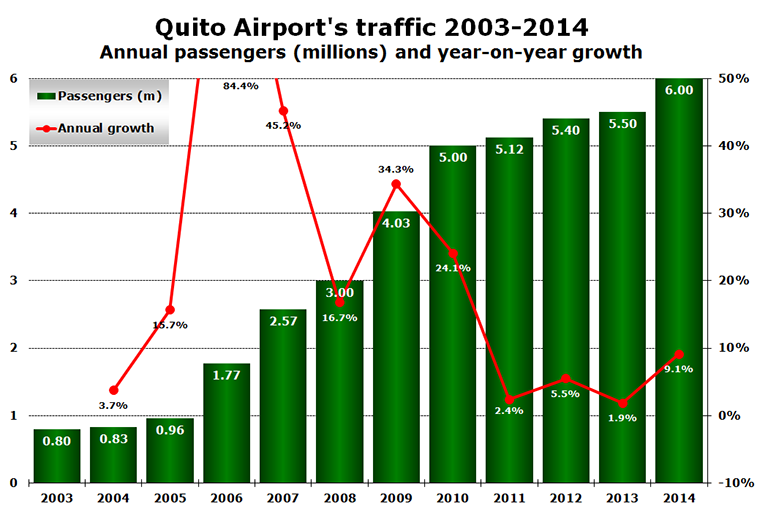 Analysis of data provided by the airport authority indicates that Quito’s traffic has grown impressively during the 2003-2014 timeframe, with an average annual growth rate (CAGR) of 18% over this period. The airport handled around six million passengers in 2014 (a new record high), a number that increased from the 800,000 recorded 12 years ago. In addition, when compared to 2013 figures, Quito’s traffic increased by 9.1%. Interestingly, the airport continued to grow even in the worst years of economic recession, experiencing a double-digit growth of 24% in 2010 when compared to the previous year.

Evaluation of OAG Schedules Analyser data for this May indicates that a total of 11 airlines are serving Quito, with tame maintaining its top position. The largest airline of Ecuador accounts for 37% and 40% of weekly seats and flights respectively and operates a total of 16 airport pairs from Quito, of which the domestic route to Guayaquil is the most frequently served airport pair with 64 weekly departures, being followed by the sector to Cuenca with 19 weekly flights. Ranking second with a weekly seat share of 19%, LAN Ecuador (LAN Airlines’ subsidiary established in July 2002) connects Quito to Guayaquil (67 times weekly), Cuenca (17 times weekly), Miami (daily) and Baltra Island (five times weekly). 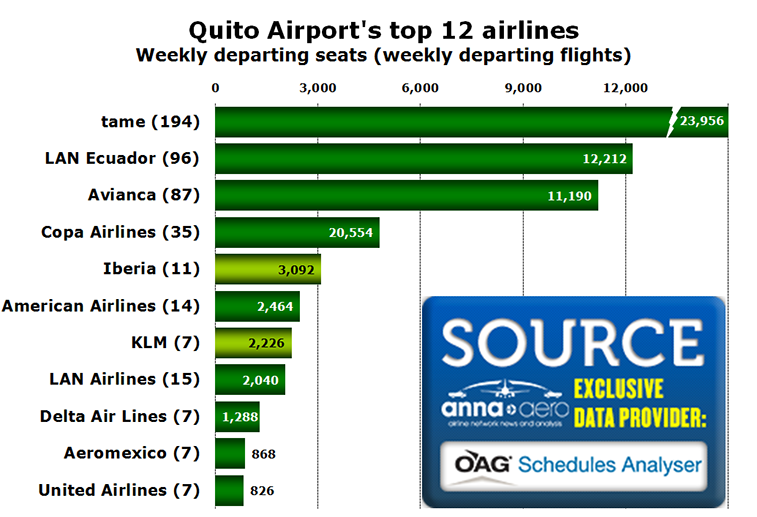 Total weekly seat capacity at Quito has gone done 11%, with five of the top 11 carriers recording growth, when comparing data from this May with the same week last year, while American Airlines and Aeromexico saw their operations unchanged. Following the integration of Aerogal’s operations as part of their merger, Avianca is the fastest growing carrier, with a net increase of 2,310 weekly seats over the last 12 months. By comparison, LAN noted the greatest capacity decline (-51%), due to having reduced its frequency on the sector from Quito to Guayaquil from 10 times weekly to thrice-weekly, but also owing to having withdrawn its four times weekly departures to Medellin as well as thrice-weekly flights to Cali.

Furthermore, two European carriers (highlighted in bright green) are serving Ecuador’s capital, namely Iberia which links Quito to Madrid with thrice-weekly non-stop flights, and Quito to Guayaquil with eight weekly departures, with the latter being served as part of its 9,007-kilometre airport pair between Quito and Madrid via Guayaquil. Besides Iberia, KLM also flies daily from Quito to Amsterdam via Guayaquil, using its 318-seat 777-200s.