American Airlines grows by 4.8% at Dallas/Fort Worth in 2014; 185 destinations served this May Dallas/Fort Worth Airport is a major gateway to the state of Texas, serving the Dallas/Fort Worth metropolitan area which has a population of around 6.5 million – making it the largest metropolitan area in the southern US. The airport is also the busiest operational hub for the world’s biggest carrier in terms of passengers carried in 2014, American Airlines, which finalised its merger with US Airways last December. While their operations merged last year, the US Airways brand, which can be traced back 75 years, still persists in the industry, but American plans to shut down the venerable brand over a 90-day stretch that could begin as soon as July, and would mean a final departure around October.

This May, American offers 150,000 more weekly seats from DFW than the second busiest airport for the oneworld member, now Charlotte Douglas (a former US Airways hub), a lead that increased in the last 12 months. Over the same timeframe, the gap between DFW and the airline’s third biggest base at Miami has grown from 290,000 weekly seats to over 292,000. Overall, all three major bases of American posted capacity growth, with Miami (+5.1%) outperforming DFW (+3%) and Charlotte Douglas (+0.2%).

Examination of data facilitated by the airport authority reveals that American along with its partners handled around 52 million passengers at the airport last year, representing an increase of 4.8% when compared to 2013 figures. In total, DFW recorded close to 64 million passengers in 2014, up 5.1% on the previous year. 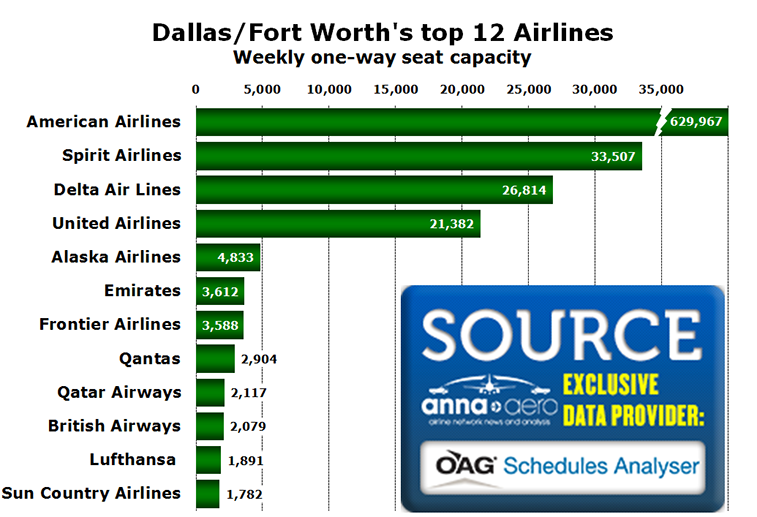 Analysis of OAG Schedules Analyser data for the fifth month of 2015 indicates that the oneworld member is the clear market leader at DFW, with a weekly seat share of 85% (3% more than in the corresponding month of 2014), followed by Spirit Airlines (with 4.5%) and Delta Air Lines (3.6%). Moreover, domestic traffic represents 88% of total seat capacity American offers out of DFW, giving it an 86% share of domestic capacity at the airport (above Spirit and Delta with 4.9% and 4.2% respectively). In addition, American leads the international market out of DFW as well, controlling 75% of total seat capacity, followed by Air Canada and Aeromexico at only 1.4% each. In fact, the carrier expanded its international network from DFW on 7 May, when it started daily operations to Beijing, utilising its 247-seat 777-200s. This is the airline’s second route to the Chinese capital, as it already flies daily from Chicago O’Hare.

For the week being analysed, American operates a total of 185 non-stop routes from DFW, with an average weekly frequency of 29. By comparison, the airline offers 140 destinations from Charlotte Douglas and 124 from Miami, with the former being served with an average weekly frequency of 32, and the latter being just 18. The oneworld member’s top 12 routes from DFW account for 19% of all weekly departures (down 1% from last year’s figures), of which Los Angeles is still the most frequently flown destination with 106 weekly departures. 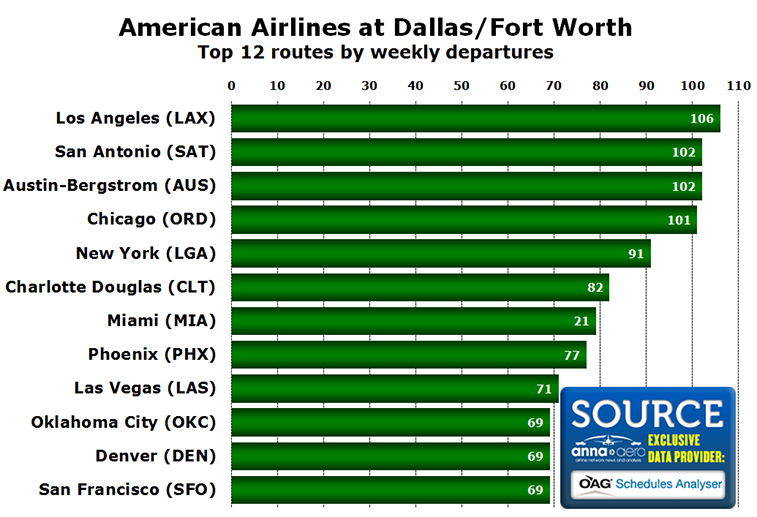 American’s weekly departures at DFW posted an increase of 2.1% this May, with six of the top dozen sectors growing. The 282-kilometre sector to Oklahoma City (in Oklahoma) is the fastest-growing route as the oneworld member has increased its operations by 13% or by an additional eight weekly departures. On the other hand, the route to its second base at Charlotte Douglas has seen the greatest capacity decrease (-16%), following American’s withdrawal of 16 weekly departures over the last 12 months.

Analysis of which of American’s routes from DFW offer the most capacity measured by ASKs (Available Seat Kilometres) sees London Heathrow top the list, being served with thrice-daily flights. Noteworthy is the fact that four of the top dozen airport pairs are long-haul international services (highlighted in bright green), including three to Asia (Tokyo Narita, Hong Kong and Shanghai Pudong). Overall, American flies to a total of 26 country markets from DFW this May, with Mexico being the most extensively served with a total of 279 weekly departures. 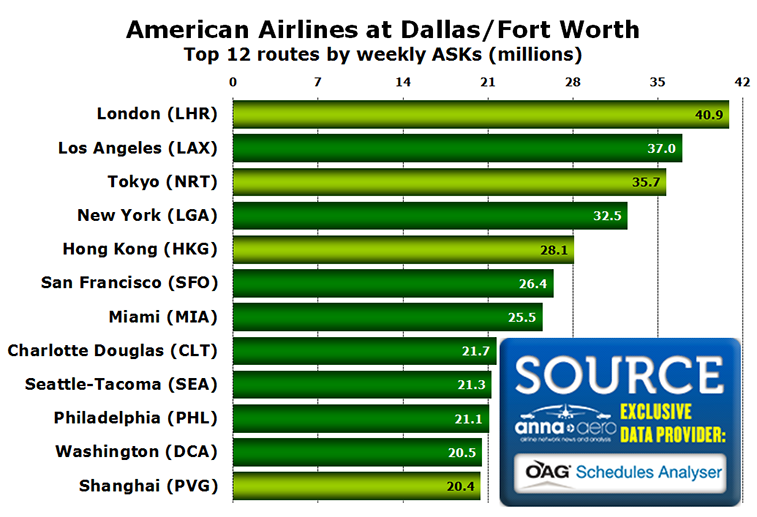 The 2,231-kilometre sector to New York LaGuardia is the fastest growing airport pair (+9.1%) this May (when compared to data from the corresponding week last year), while the DFW-Philadelphia route provided the greatest capacity fall (-16%). The oneworld member has reduced its frequency on the 2,092-kilometre sector to Philadelphia from 39 times weekly to 33 times weekly over the past 12 months. Furthermore, both Hong Kong and Pudong are new entrants into this year’s ranking, as the carrier introduced daily flights to the two Asian destinations on 11 June 2014. On 11 June, American Airlines expanded its Asian offering from Dallas/Fort Worth with daily flights to Hong Kong. Celebrations were marked with a special festivity, including a ribbon cutting, a speech from Betsy Price, Mayor of Fort Worth, and dragon dances in the terminal.