On 2 July 2014, Ryanair celebrated with a cake one million passengers at Lille Airport. The ULCC is now serving the French gateway from Marseille and Porto with daily and thrice-weekly flights respectively. Marking the achievement were: Pierre Fernèmont, Route Development Manager, Lille; Audrey Legaigneur, Sales and Marketing for France, Belgium and Morocco, Ryanair; Amandine Lienard, the lucky passenger; and Hugues Perimony, Representative for Aélia Duty Free.

Located in Lesquin, seven kilometres away from Lille – the capital of the Nord-Pas de Calais region and the prefecture of the Nord department – Lille Airport (also known as Lille Lesquin Airport) is classified as France’s 10th busiest airport according to anna.aero’s European Airport Traffic Trends database, behind Paris Beauvais, but above Montpellier. Under operational control of SOGAREL (Socièté de gestion de l’aéroport de la région de Lille), the airport offers 34 non-stop services flown to 10 country markets within Europe and North Africa, according to OAG Schedules Analyser data for this May. 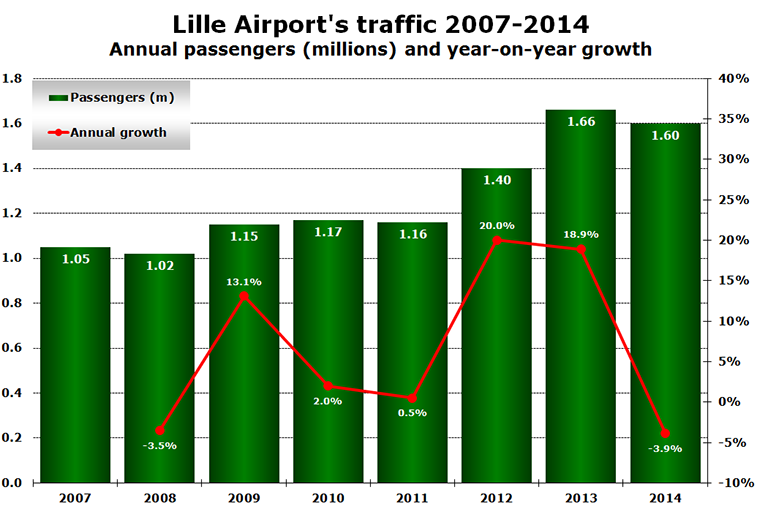 Examination of data facilitated by the airport authority reveals that Lille has grown visibly between 2007 and 2014, with an average annual growth rate (CAGR) of 5.4% over this timeframe. The airport handled around 1.6 million passengers in 2014, a number that increased from the 1.1 million recorded eight years ago. In fact, Lille posted a stable development until 2012, since when it has seen its passenger numbers surge by 20% thanks to the addition of at least 13 new routes from six different airlines (easyJet, HOP!, Ryanair, transavia.com France, TWIN JET and Volotea). Traffic continued to grow until last year, when the airport posted a modest decline of 3.9%. Moreover, in the first two months of 2015, for which traffic data is already available, Lille witnessed a 6% decrease when compared to the same period last year.

Entering Lille’s monthly passenger data for 2014 into anna.aero’s Seasonal Variation in Demand (SVID) calculator, the airport performs well, producing a score of 9.48, a “good rating”. However, the airport’s seasonality performance has bettered when compared to the score recorded in 2013 (11.46), moving from the “poor” to “good” category. With over 30 seasonality performance evaluations completed so far this year, Lille has entered the rankings at #26 spot overall, lodging itself between Glasgow (5.56) and Athens (9.77).

To give Lille a fair evaluation, we also run calculations on Beauvais (3.19 – good) and Brussels Charleroi (3.54 – good). Against its airport peers from its two-hour catchment area, Lille’s 2014 score is marginally higher than Paris’ third gateway. Moreover, when compared to Charleroi, it also performs worse than the 6.4 million passengers facility. In addition, the seasonal lows for the three airports represent 46% (Lille), 57% (Beauvais) and 59% (Charleroi) of their respective seasonal highs.

Evaluation of OAG Schedules Analyser data for this May indicates that a total of 11 airlines are serving Lille, with HOP! maintaining its top position. The regional subsidiary of Air France accounts for 23% and 42% of all weekly seats and flights respectively and operates a total of eight routes from Lille, of which Bordeaux is the most frequently flown destination, being served with 16 weekly flights. Not far behind, with a weekly seat share of 20%, is easyJet, which connects Lille to Nice (10 times weekly), Toulouse (daily), Bordeaux (four times weekly) and Geneva (four times weekly). 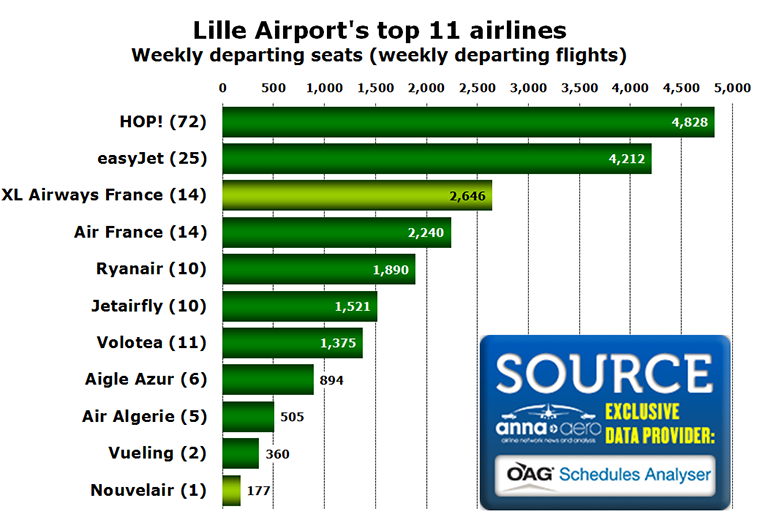 Weekly seat capacity has gone down 8.2% (when comparing data from this May with the same week last year), with three carriers recording growth, while Air Algerie and Vueling saw their operations unchanged. Furthermore, over the past 12 months, Lille has seen the arrival of XL Airways France with 12 routes being operated by a combined total of 14 weekly departures as well as Nouvelair’s weekly flights from Djerba (both highlighted in bright green); while five other airlines have ceased their operations from the French airport, namely Thomas Cook Airlines Belgium, transavia.com France, Corsair, Luxair and Tunisair. Volotea is the fastest growing airline at the airport, with a net increase of 750 weekly seats or 120% over the last 12 months, due to having introduced twice-weekly flights to Biarritz and Figari. By comparison, Air France provided the biggest capacity decline (-35%) or 1,204 fewer seats as a result of reducing its frequency to Marseille from 17 times weekly to daily.