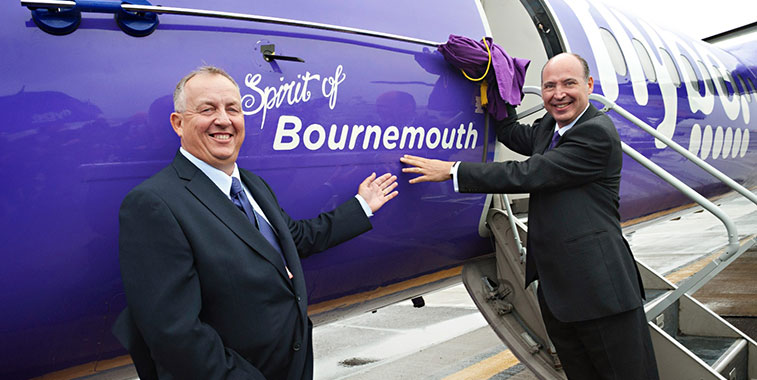 On 18 May Flybe celebrated the launch of its new base at Bournemouth Airport with a naming ceremony for one of its Q400s. The “Spirit of Bournemouth” was unveiled by Paul Knight, MD, Bournemouth Airport and Saad Hammad, CEO, Flybe. Glasgow flights began at the end of March, while this week sees the start of the remaining eight services to Amsterdam, Biarritz, Deauville, Dublin, Jersey, Manchester, Paris CDG and Toulon-Hyères. These services will all be operated by the airline’s Q400s, two of which will now be based at the airport.

This week sees the start of Flybe’s new base from Bournemouth, a UK airport on the country’s south coast. The airline’s decision to launch nine routes from the airport this summer will make it the leading carrier in terms of weekly departures. In recent years the airport has typically handled between 600,000 and 700,000 passengers, though in both 2007 and 2008 it processed in excess of one million passengers. The doubling of passenger numbers between 2004 and 2007 encouraged the airport to replace its existing terminal with a new one, which opened in 2010. 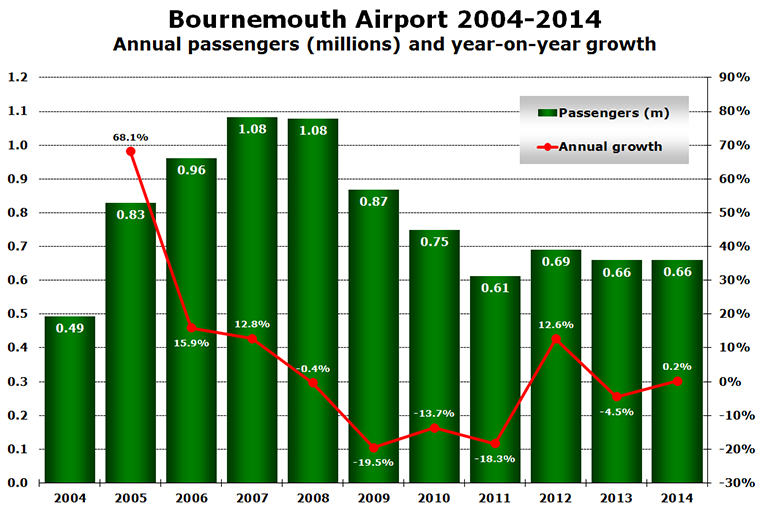 Operations at the airport are extremely seasonal and based on passenger numbers in 2014 the airport has a SVID score of 32.64 (“Managerial and operational challenges”), while Southampton (which is less than 40 kilometres away), scores a “good” 5.13. Passenger numbers so far in 2015 are down slightly last year, though the introduction of Flybe’s services should see year-on-year growth during the peak summer season. 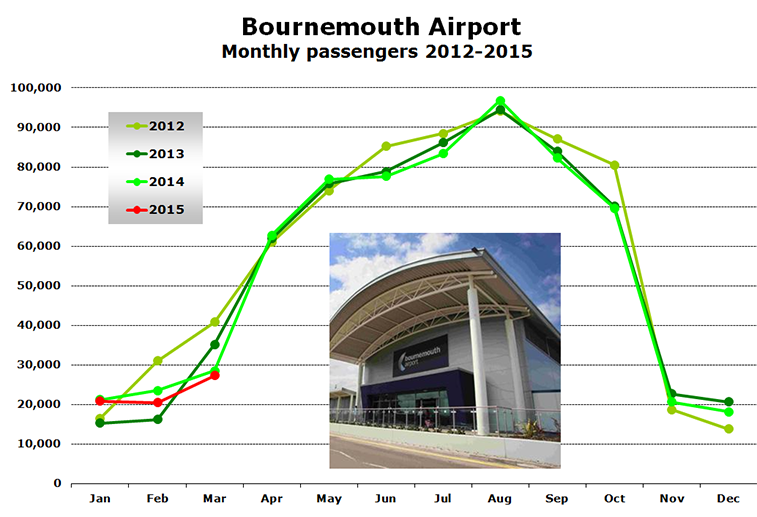 Flybe will this summer serve a total of nine destinations from Bournemouth. Glasgow became the airline’s first route at the end of March and the remaining eight (to Amsterdam, Biarritz, Deauville, Dublin, Jersey, Manchester, Paris CDG and Toulon-Hyères) are set to start between the 18th and 23rd of May. All of these routes will be flown by the airline’s fleet of Q400s. During the peak summer season, all of these destinations (apart from Biarritz) will be served with at least four weekly flights, with Glasgow, Jersey and Manchester served with up to twice-daily flights.

Ryanair has served 30 destinations from Bournemouth since 2006

Ryanair made Bournemouth its 24th base in April 2008. It had been flying to the airport from Dublin since May 1996. In 2003, it added two further routes from Glasgow Prestwick and Girona, with a fourth route to Pisa starting in June 2006. In total, according to anna.aero research, Ryanair has served 30 destinations from Bournemouth, though never more than 16 in any given season. This summer the airline’s offering from the airport has fallen to just nine routes; seven in Spain, plus Faro and Malta. Since last summer services to Carcassonne, Chania, Fuerteventura, Ibiza, Pisa, Reus and Rhodes have been suspended. Other destinations no longer served include Dublin, Edinburgh, Glasgow Prestwick, Madrid, Marseille, Milan/Bergamo, Nantes, Paris Beauvais, Shannon, Valencia and Wroclaw.

This summer Ryanair is serving nine destinations from Bournemouth; seven in Spain plus Faro in Portugal and Malta. Since 2006 the ULCC has served a total of 30 destinations at one time or other from the UK airport.

The other main player at Bournemouth Airport in recent years has been Thomson Airways. This summer the leisure airline will be serving 10 destinations, one more than both Flybe and Ryanair. Routes to Palma de Mallorca and Tenerife South will both compete directly with Ryanair, but the remaining routes to Antalya, Corfu, Dalaman, Ibiza, Lanzarote, Menorca, Paphos and Rhodes will be uncontested.