Flights down 5.8% and ASKs down 13% between Asia and Africa; Hong Kong-Johannesburg is #1 city pair Several new routes were launched in the past 12 months between Asia and Africa, including Ethiopian Airlines’ thrice-weekly flights from its Addis Ababa base to Tokyo Narita, operated via existing Hong Kong service. The 11,064-kilometre route, which is not served directly by any other operator, is flown by the Star Alliance member’s 269-seat 787-8s.

Examination of OAG Schedules Analyser data for this May reveals that flights between Asia and Africa have experienced a decrease of 5.8% in the last 12 months, with around 155 weekly flights being now operated between the two regions. Total weekly departing seats have decreased at a faster rate, having over the last year declined by 8%, with ASKs down 13% to 2.7 billion ASKs being offered this May. Perhaps this decrease has happened as a result of many passengers flying between these regions electing to transit through one of the MEB3 carrier’s (Emirates, Etihad Airways and Qatar Airways) hubs instead.

The top 12 country pairs represent over 83% of all weekly seats provided between the two regions, which has increased from the 77% recorded for the same week last year. The market pairing between China and Ethiopia has managed to maintain its top position this year, as the operations between the two regions have increased by 7.2%, or 502 more seats. Ethiopian Airlines is the only carrier serving this country pair, linking its Addis Ababa base to Beijing, Shanghai Pudong and Guangzhou, all with daily departures.

While the top position has remained unchanged, there have been movers (highlighted in bright green) in this year’s ranking. A new entrant into the top dozen is that of #11 country pair, China to Mauritius, which posted an increase of 22% due to China Southern Airlines having commenced twice-weekly departures from Shenzhen to Mauritius. Furthermore, ranking 12th, the market pairing between Hong Kong and Ethiopia is also a new entrant this year, following the addition of a fifth weekly flight by Ethiopian on the sector between Addis Ababa and Hong Kong. 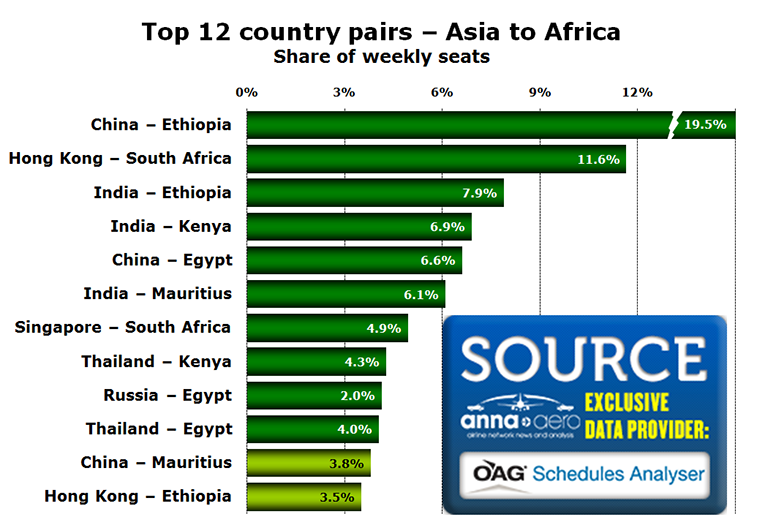 Overall, half of the top dozen country pairs experienced growth when comparing data from May with the same week last year, while operations between Singapore and South Africa, as well as from China to Egypt remained unchanged. While the link between Hong Kong and Ethiopia is the fastest growing country pair, having increased by 43% or 405 weekly seats in the past 12 months, this year’s leader has posted the biggest net increase in capacity, namely an additional 502 weekly seats. By comparison, services between Thailand and Egypt provided the greatest capacity decrease (-25%), as a result of EGYPTAIR having reduced its frequency from Cairo to Bangkok Suvarnabhumi from six times weekly to five times weekly.

While Ethiopia is featured in three of the top 12 country pairs, the African country is present in four of the top dozen route pairs. Therefore, Addis Ababa is by far the most popular African destinations for services from Asia, being featured four times in the top 12 airport pairs between the two regions. The top 12 city pairs currently offer around 68% of the total market, which is up 5% when compared to the corresponding week of 2014. Two new entrants have entered this year’s ranking, namely the 4,690-kilometre sector from Mumbai to Mauritius and the 8,103-kilometre airport pair from Hong Kong to Addis Ababa, with the former posting double-digit growth of 29% due in part to Air Mauritius having introduced an additional weekly departure on the sector, utilising its 298-seat A340-300s. 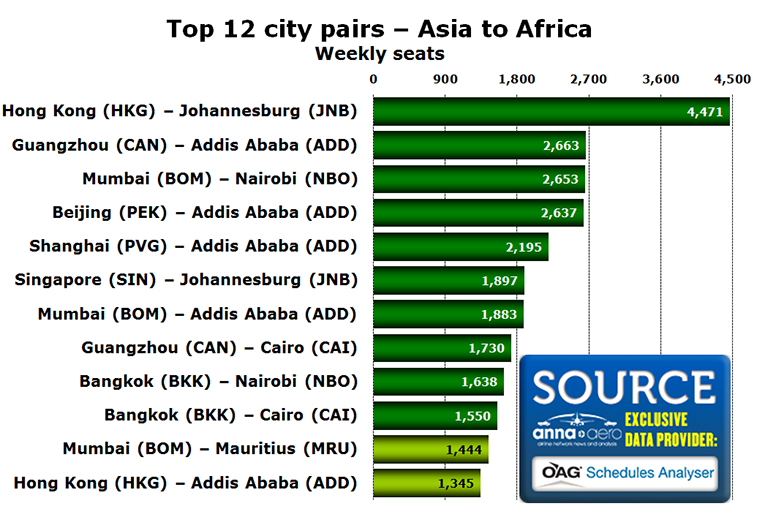 Following a yearly increase of 4.5%, the 10,668-kilometre sector from Hong Kong to Johannesburg still accounts for the majority of weekly seats this May, being served by Cathay Pacific Airways and South African Airways, each with daily flights. Furthermore, city pair #5, Pudong-Addis Ababa, managed to climb two positions, as weekly seat capacity increased by 12% this May. On the other hand, four of the top dozen city pairs experienced capacity loss in 2015, while the 8,650-kilometre route from Singapore to Johannesburg and the 7,987-kilometre airport pair from Guangzhou to Cairo saw their operations unchanged. Services between Suvarnabhumi and Cairo recorded the greatest capacity decrease (-25%), followed by Mumbai-Nairobi (-14%), Guangzhou-Addis Ababa (-4.7%) and Mumbai-Addis Ababa (-3.6%). On 18 June, Air China will add fresh capacity to this inter-regional market, when it commences thrice-weekly Beijing to Johannesburg operations.