Bangladesh’s capacity grows on average by 7.6% per year over last 11 years; UAE is top international market Biman Bangladesh Airlines, which commands 31% and 21% of all weekly seats and flights respectively in Bangladesh, expanded its international offering on 31 March 2014, when it added its third European destination, namely Frankfurt, operated via Rome Fiumicino. The flag carrier is also serving London Heathrow in Europe. Guest of honour at the launch celebrations was Dr Ferdinand Von Weyhe, Deputy Head of the Mission at the German Embassy in Dhaka.

Bangladesh, which was East Pakistan between 1947 and its own independence in 1971, has the world’s eighth biggest population (estimated to be over 160 million) despite being about 10% smaller than the state of California. The country is a major agricultural producer, particularly in the global production of rice, fisheries, jute, tea and tropical fruits. Other major industries include telecommunications and pharmaceuticals, with the latter meeting 97% of domestic demand and exporting to 52 countries worldwide.

The air transport sector plays a significant role in the country’s development, with Bangladesh being served by eight commercial airports according to OAG Schedules Analyser data for May 2015, of which Dhaka (perhaps better known as Hazrat Shahjalal International Airport) controls around 74% of the country’s scheduled seat capacity. Besides Dhaka, there are two other airports offering international flights, namely Chittagong and Sylhet. Overall, Bangladesh’s annual seat capacity has grown by an impressive 49% since anna.aero last looked at this country market five years ago.

Examination of OAG Schedules Analyser annual capacity for this May reveals that around 4.6 million one-way seats may be offered on air services involving Bangladeshi airports in 2015, which may account for a double-digit increase of 20% when compared to 2014 figures, assuming that there are no significant changes in carriers’ schedules. Nevertheless, this figure is likely to alter as airlines may introduce or cancel services over the following seven months. Based on schedules currently filed, domestic traffic is expected to register an increase rate of 37%, while the international sector may go up by only 13%. 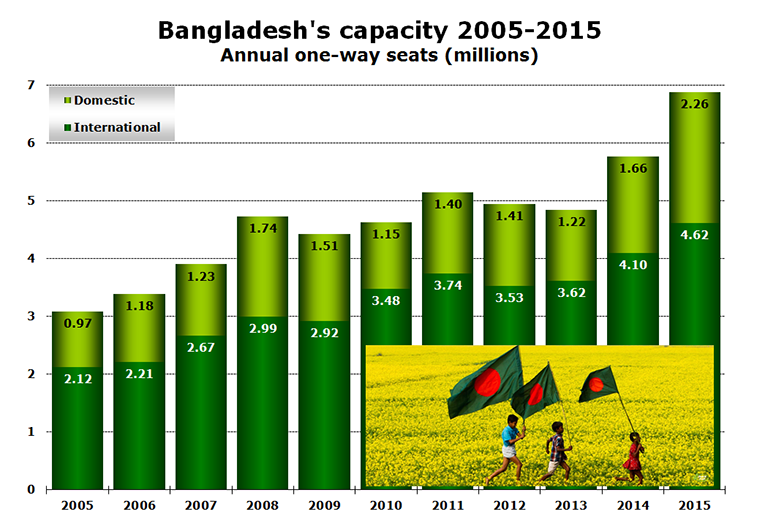 Looking at annual seat figures between 2005 and those currently posted for 2015, the combined capacity of the eight Bangladeshi airports grew with an average annual growth rate (CAGR) of 7.6%, with the domestic sector (+8%) outperforming the international market (+7.4%). Also interestingly, the domestic sector may increase by 134%, while the international one may go up 118% in 2015, when looking back 10 years to 2005. Not surprisingly considering the country’s political and economic instability, Bangladesh’s air traffic market saw an uneven development in the 2005-2013 timeframe. Nonetheless, traffic began to stabilise in the last two years, posting a 19% increase in 2014 when compared to 2013.

Biman bosses Bangladesh with 31% and 21% of seats and flights

As of May 2015, Bangladesh is served by a total of 29 airlines, with the national carrier Biman Bangladesh Airlines being the dominant player in this country market, as it controls 31% and 21% of all weekly seats and flights respectively. This week, Biman operates a total of 29 airport pairs, of which 22 of them are international routes. Kolkata is the flag carrier’s most frequently served international destination, being served with 15 weekly flights from Dhaka and Chittagong.

While the domestic sector is Bangladesh’s biggest country market, representing 33% of all weekly seats, 19 other countries can be reached non-stop from Bangladeshi airports according to OAG Schedules Analyser data for this May. At around 26,000 weekly seats, and 28% more than in the corresponding week last year, the UAE remains the dominant international market, being served by six carriers (Air Arabia, flydubai, Emirates, Biman, Etihad Airways and United Airways) with a combined 108 weekly flights from Dhaka, Chittagong and Sylhet. 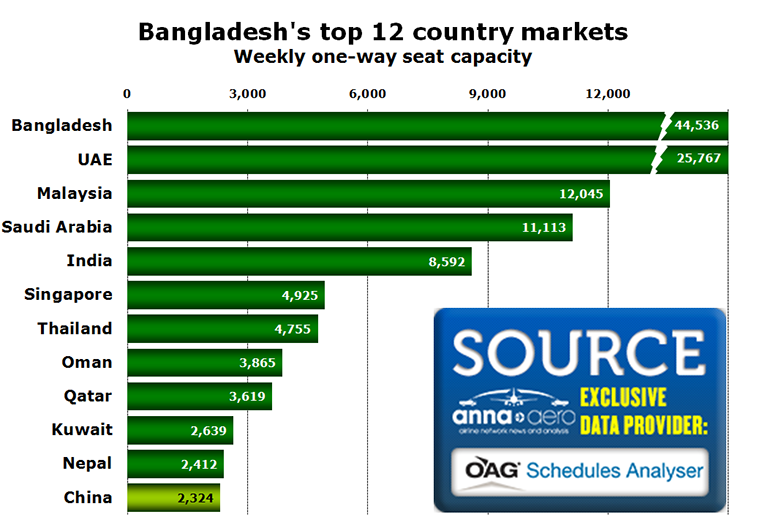 While the domestic sector is the fastest growing country market having increased by 46% or an additional 14,000 weekly seats, Qatar has witnessed the most significant decrease (-23% or 1,052 fewer weekly seats), as a result of Qatar Airways having reduced its frequency on the 3,929-kilometre route between Dhaka and Doha from twice-daily to 10 times weekly. Overall, weekly seat capacity in Bangladesh for this May has gone up 14% (when compared to the same week last year), with seven of the top dozen country markets recording growth. One new entrant has entered this year’s ranking, namely China (highlighted in bright green) due to posting double-digit growth of 24%. This has come as a result of China Southern Airlines having increased its frequency on the Guangzhou-Dhaka route from four times weekly to daily over the past 12 months.