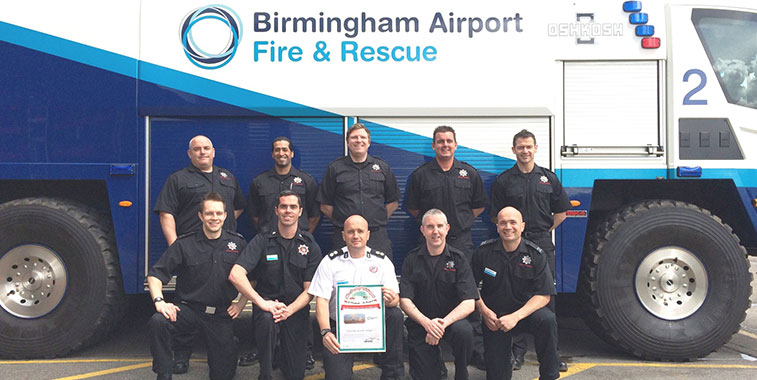 Along with Lyon (four), Miami, Tokyo Narita and Berlin Tegel (all three), Birmingham Airport has been one of the most prolific providers (also with four) of FTWAs so far this year. A statistic that just goes to prove that winners never quit…and quitters never win (I sound like a football coach). In 2014, the airport entered the ‘Arch of Triumph’ competition just once, finishing fourth in a busy week, when there were 13 entries in total (it never entered at all in 2013). So clearly by upping their number of entries, the UK Midlands airport’s fire station will now be proudly displaying its first ever ‘Arch of Triumph’ certificate. North America has finally broken the European strangle hold over the inter-regional competition, which has seen the latter string together six back-to-back wins. With four wins (27% of the 15 competition weeks), North America has now doubled the wins amassed by Asia and South America (both with two), with the likes of the Africa, Australasia and the Middle East still to register any wins in 2015.

We had eight FTWAs enter the competition representing eight route launches this week, with pretty much a global spread. Now we have a lot of laughs judging these arches. But let us not forget that these fire crews train all day long to keep us all safe: The FTWA may be a light-hearted way to salute a new route, but it has a serious side in honing skills that we hope never to be used. Keep monitoring!! 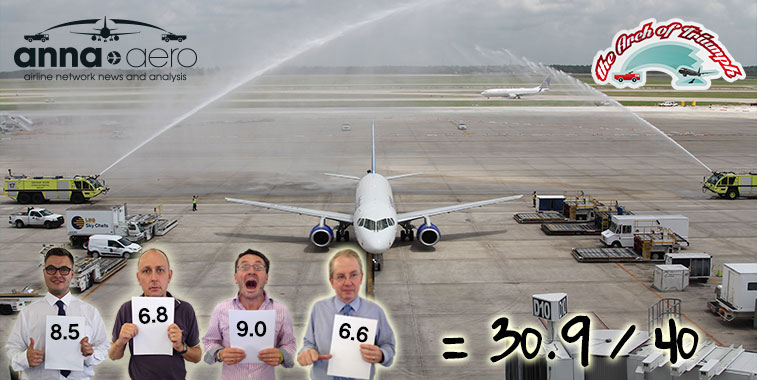 Judge’s Comments: This style of fire truck water arch is known as “George Bush, Senior, George Bush, Junior” to celebrate two great Houstonians who went on to become the first father-son US Presidents. The airport’s long given name ‒ Houston George Bush Intercontinental Airport – is for George H.W. While his son is best known for the invasion of Iraq, his dad is most celebrated for his pronouncement on not serving broccoli on Air Force One: ”I do not like broccoli. I haven’t liked it since I was a little kid and my mother made me eat it. And I’m President of the United States, and I’m not going to eat any more broccoli.” What common sense. We can only dream of such an uninhibited, strong President today. 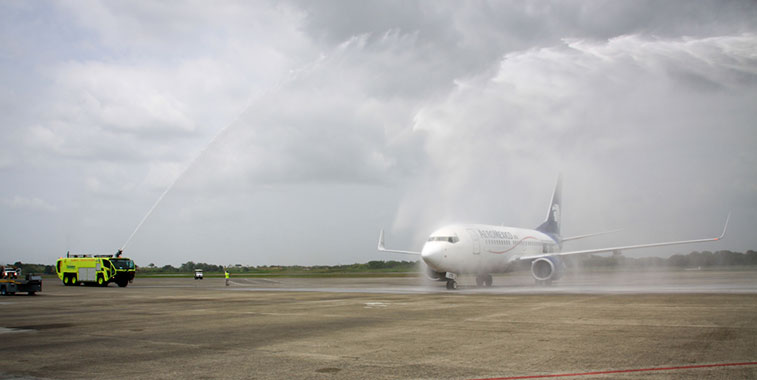 Judge’s Comments: The truck on the left is doing a great job. The truck on the right seems to be parked several hundred metres away where he can get a better view of his TV to watch Chorrillo FC lose their last game 3-0. They’re second bottom in the league; a bit like this arch. 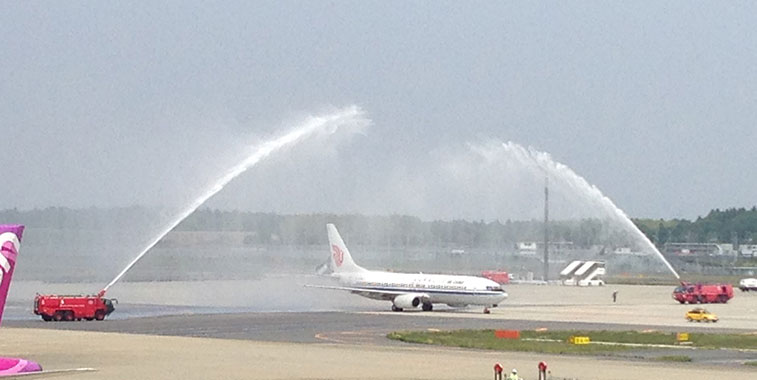 Judge’s Comments: This style of arch is known as the “Tsugaru Strait” because the gap between the two water jets symbolises the straits between Japan’s two largest islands. While instantly recognised by any Japanese housewife, the Tsugaru Strait is almost completely unknown in the rest of the world. This great piece of Japanese engineering just isn’t ready for export yet.

Wizz Air Budapest to Maastricht 15 May 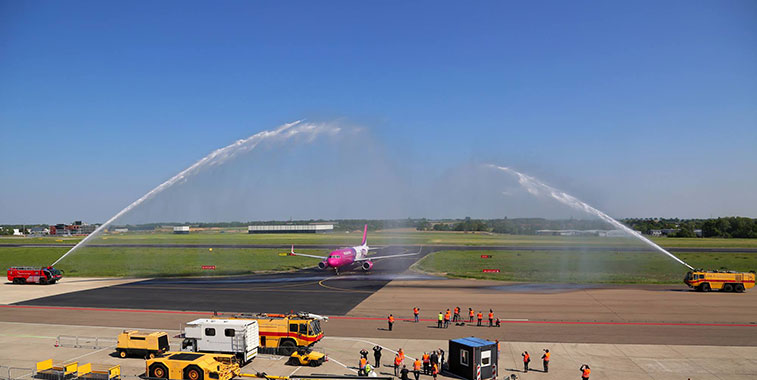 This one is called the “Maastricht Treaty…”

Judge’s Comments: This is another arch with an important gap at the top. This one is called the “Maastricht Treaty” after the document, which led to the creation of the European Union, signed in Maastricht in 1992. The treaty reflected the serious intentions of all countries to create a common economic and monetary union. Meanwhile the “gap” in this arch reflects ongoing serious strains including the fiscal crisis in the Eurozone and British ambivalence to even remaining in the Union (anna.aero prediction: the UK will vote to stay in the EU, just like Scotland stayed in the UK).

Air Astana Kostanay to Hannover 17 May 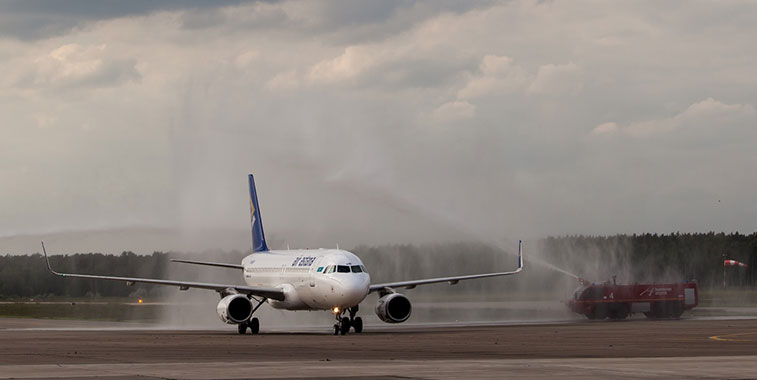 This arch does have a name: “Mist Again…”

Judge’s Comments: Look, what do you want us to say? We like Hannover a-lot. The airport, the city – the fact that it has a really great Oktoberfest, the second largest in the world. But sorry fellas, there’s no second place today.

KLM Amsterdam to Belfast City 18 May 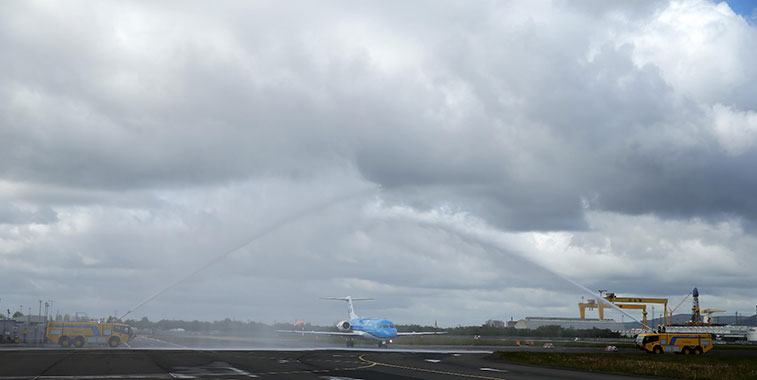 Can you see the Harland & Wolff cranes in the background? This airport is laid out alongside the shipyards where the Titanic and other great ships were built.

Judge’s Comments: Before you get excited, this arch is not dedicated to either the SS Titanic or, for that matter, Kate Winslet. It’s called a “San Jose Earthquake.” Whatttttt? Well it’s like this. Belfast City is named for George Best, probably the finest football player of his generation (and several more). His best-ever goal came nearer the end of his career in 1981, when he was off playing for the San Jose Earthquakes. Have a look on YouTube. This arch is almost as talented. A fine tribute.

KLM Amsterdam to Kraków 18 May 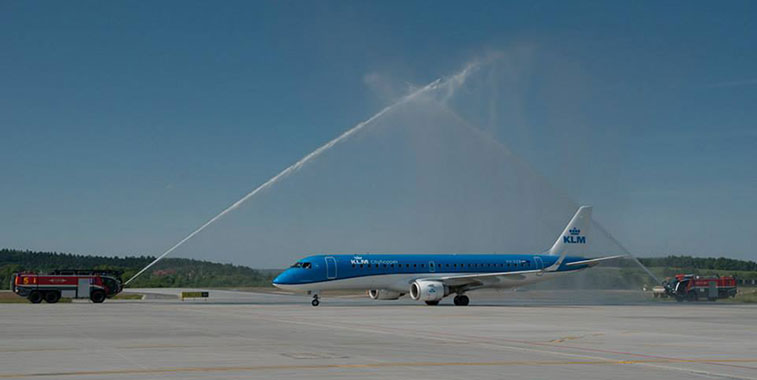 A Roman Cross in Kraków in honour of John Paul II?

Judge’s Comments: This is a really good execution of a Roman Cross – a style of arch devised by the airport which serves the Vatican. John Paul II, born Karol Wojtyla in 1920, grew up in Wadowice, a small town not far to the south-west of Kraków, which probably explains this choice.

Vistara Delhi to Lucknow 18 May 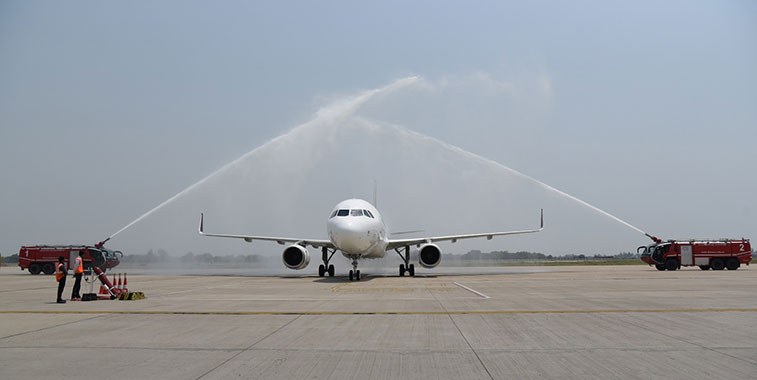 Brilliant or a bit safe: “The Sir Cliff Richard…”

Judge’s Comments: We had a massive row in the office about this one and some pretty harsh words were said in anger; it may take some weeks to recover to speaking terms. Some think this is a work of genius, others think that while it is brilliantly executed to military precision, it is also a bit “safe.” In fairness that is probably the case. It is, after all, called “The Sir Cliff Richard”, who was born in Lucknow in 1940. Sir Cliff may well have sold 21 million records, but he just never had that risky edge that you got from his contemporaries like John Lennon, Mick Jagger or Roger Daltry – is that the same for this arch? You can probably imagine what the argument was like now.