Regional connectivity in France, Germany and the UK revisited; winners and losers between 2009 and 2015 revealed 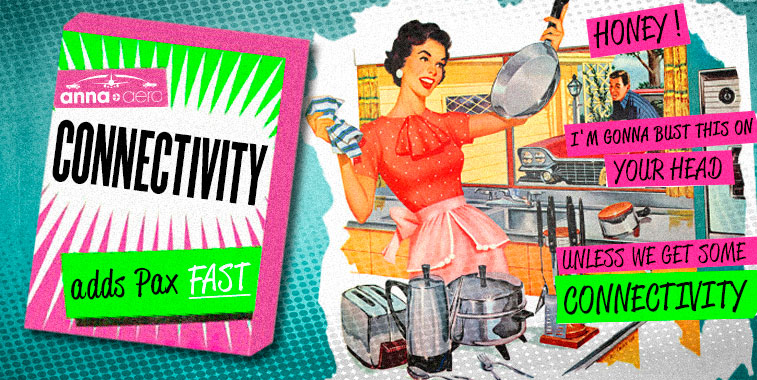 When we first ran this connectivity analysis around five years ago, we were just launching TheRouteShop.com – the anna.aero online route superstore where airports list vacant routes. Most of the airports mentioned in today’s article are now advertised there – just click on the little yellow logos embedded in the text to view some of the 3,652 routes listed by almost 400 airports, or – if you’re feeling lucky – go straight to TheRouteShop.com and play “Route-lette.”

While browsing through anna.aero’s massive collection of freely-available on-line stories dating back to July 2007, our Chief Analyst came across some analysis done in late 2009 and early 2010 examining how well connected (or otherwise) some of Europe’s larger regional airports were, with major cities across Europe. This was done for France, Germany and the UK using schedule data for August 2009 (for France and Germany) and November 2009 for UK airports. This got us wondering how much had changed in the intervening six years. So this week we revisit these three country markets and look at the same routes to see what developments there have been.

The figures in the tables are the number of weekly frequencies currently scheduled for the first week of August 2015. Greyed out cells represent a lack of flights both now and in 2009. Cells shaded green (with a number in them) indicate routes that are now flown, but which were not flown back in 2009. Red cells represent routes that were flown in 2009 but are not operating in the first week of August this year.

Bristol and Glasgow much better connected

There are plenty of green cells in the UK table, with 28 city-pairs now connected that did not have service six years ago. Glasgow with seven new connections and Bristol with six are the biggest gainers, while Manchester completes a ‘full-house’ by now being connected to all the cities in our analysis. Back in 2009 it was missing service to Berlin, Madrid and Warsaw, but all of these routes are now served. However, nearby Liverpool has lost its links to Milan, Rome and Stockholm, while Oslo Torp services operated by Ryanair, do not operate during August, according to the airline’s own on-line booking tool.

Since 2009, Glasgow has seen its connectivity improve with the addition of new flights to Barcelona, Budapest, Düsseldorf, Munich, Prague, Rome and Warsaw. However, it has lost its direct flights to Copenhagen. Bristol has gained service to Copenhagen, Düsseldorf, Frankfurt, Munich, Stockholm and Warsaw without losing any connections. 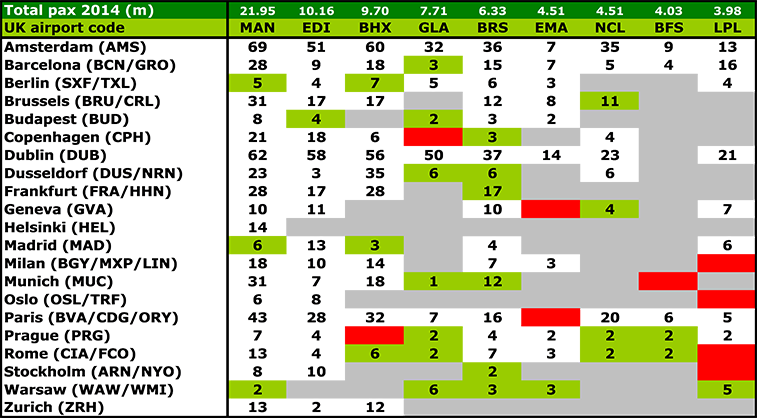 Among the German airports analysed there have been 16 new city pair connections but 12 have been lost. None of the losses have come from the larger airports examined. Bremen has seen the biggest changes with the most routes gained (four) but also the most routes lost (five), though Manchester flights do operate in winter with Ryanair, AIS Airlines serves Zurich except in August, and SAS serves Copenhagen most of the year, but again, not during the first two weeks of August. Bremen’s new services are provided by Germania (Vienna) and Ryanair (Dublin, Madrid and Prague).

Berlin gained its last ‘missing’ service when easyJet launched flights between its two bases at Berlin Schönefeld and Manchester in October 2011, while the only reason Düsseldorf is not connected to Brussels is because the two airports are only just over 160 kilometres apart and connected by a major motorway. 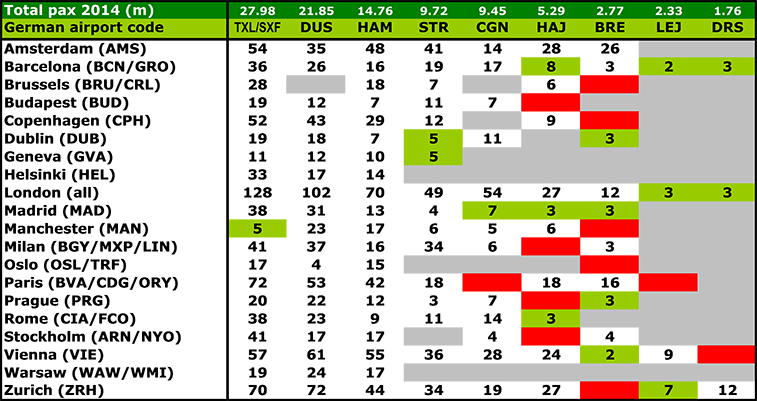 The six French airports analysed have gained a total of 21 new city pairs and lost just five between summer 2009 and summer 2015. Nice now just needs service to Budapest and Warsaw to complete a ‘full house’, having acquired Milan and Prague flights, with TWIN JET and Czech Airlines respectively. Curiously none of the French regional airports have direct service to Budapest, while only Marseille is connected with Warsaw Modlin, courtesy of Ryanair. 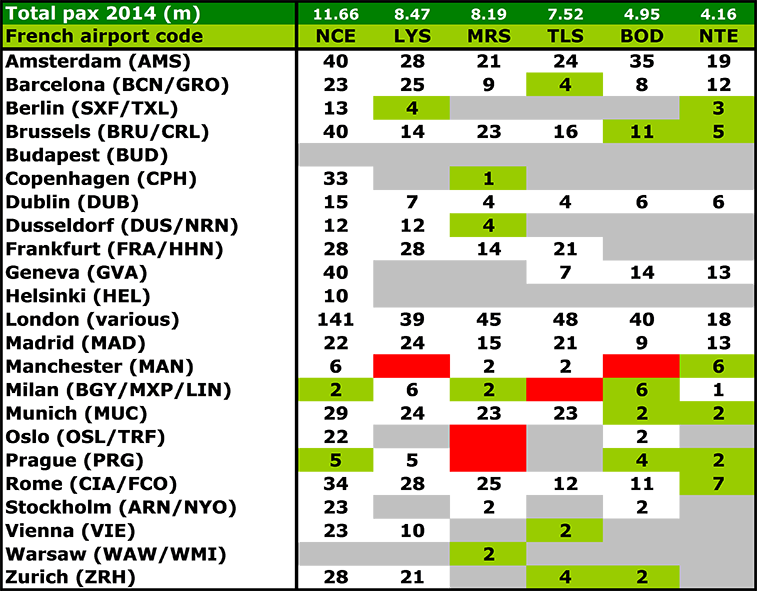 For more insight into developments in the European air transport market come and listen to our Chief Analyst, Ralph Anker, presenting at CONNECT, the international aviation forum, which is taking place this year in Kerry, Ireland from 3-5 June.