Portland Airport grew by 5.9% in 2014; Icelandair arrives from Reykjavik/Keflavik On 19 May, Portland Airport greeted a new carrier, namely Icelandair with twice-weekly flights from Reykjavik/Keflavik. anna.aero’s Chief Analyst, Ralph Anker was delighted to be invited on the inaugural flight by the Icelandic carrier. Portland is also gearing up to welcome a new carrier in September, PenAir, which will arrive with twice-daily flights from Crescent City.

Located south of the Columbia River in Multnomah County, 19 kilometres away from downtown Portland, Portland Airport in Oregon (not to be confused with the one on the other side of the US in Maine) is classified as the 29th busiest airport in the US, according to American Airport Traffic Trends database, behind Tampa, but above St. Louis. Also ranked as the largest airport in the US state of Oregon, accounting for 90% of passenger travel and more than 95% of air cargo in the state, Portland serves as an operating base for Alaska Airlines and its subsidiary Horizon Air, as well as for SeaPort Airlines, which is headquartered and operates it Pacific Northwest hub at the airport. Today, Portland offers non-stop flights to 58 destinations spread across the US, Canada, Mexico, Japan, Netherlands and Iceland (according to OAG Schedules Analyser data for this May). In fact, Iceland was only added on 19 May, when Icelandair commenced twice-weekly flights from its Reykjavik/Keflavik base, utilising its 757-200s. 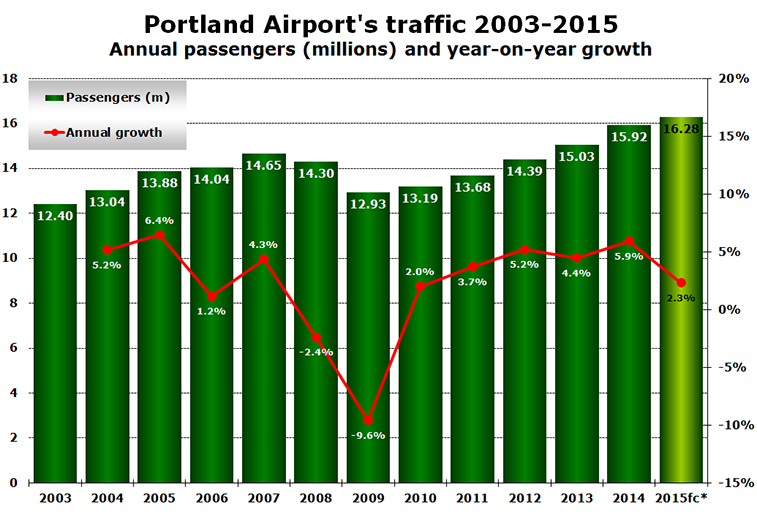 Examination of passenger data facilitated by the Port of Portland reveals that the airport’s traffic has continuously increased between 2003 and 2014, with the exception of 2008 and 2009, when decreases of -2.4% and -9.6% were recorded as a result of the global economic downturn. All in all, Portland’s traffic increased at an average annual rate (CAGR) of 2% over the 2003-2014 timeframe. Last year, the airport achieved a new record high of around 16 million passengers, following a 5.9% growth over 2013 figures. In the first four months of 2015, for which traffic data is already available, the airport posted an increase of 2.3% when compared to the corresponding period of 2014, with 4.8 million passengers achieved until end-April. If the airport continues on this growth trajectory, it will achieve over 16 million passengers in 2015, based on anna.aero forecasts.

Entering Portland’s monthly passenger data for 2014 into anna.aero’s Seasonal Variation in Demand (SVID) calculator, the airport performs exceptionally well, producing a score of 1.96, an “excellent rating”. However, the airport’s seasonality performance has worsened slightly when compared to the score recorded in 2013 (1.91). With around 40 seasonality performance evaluations completed so far this year, Portland has entered the rankings at #16 spot overall, lodging itself between Paris CDG (1.93) and Rabat (1.98).

To give Portland a fair evaluation, we also ran calculations on Seattle-Tacoma (2.80 – good) and Spokane (1.17 – excellent), both located in the neighbouring state of Washington. Against the primary gateway to the Sea-Tac region, Portland’s score is marginally better than the one posted by the fastest growing airport (+7.7%) in the US last year. On the other hand, when compared to Spokane – the second largest airport in Washington – it performs worse than the three million passenger facility. In addition, the seasonal lows for the three airports represent 63% (Portland), 59% (Seattle-Tacoma) and 71% (Spokane) of their respective seasonal highs.

Alaska Airlines dominates with 44% and 51% of seats and flights

Evaluation of OAG Schedules Analyser data for this May indicates that a total of 14 airlines are serving Portland, with Alaska Airlines being the clear market leader. The carrier along with its regional subsidiary Horizon Air handled 6.2 million passengers in 2014, growing by 11%. In addition, Alaska Airlines accounts for 44% and 51% of weekly seats and flights respectively and operates a total 36 non-stop routes from Portland, of which Seattle-Tacoma is the most frequently flown destination, being served with 175 weekly departures. Ranking second, with a weekly seat share of 17%, is Southwest Airlines, which carried 17% of all passengers in 2014 (2.7 million). This May, the ULCC connects Portland to 11 domestic points in the US. Interestingly, Portland accommodates a total of 11 US airlines, which is quite impressive for an airport with less than 20 million passengers per annum. The most notable absentee is Allegiant Air, which operated at the airport last year, having handled 3,843 passengers. 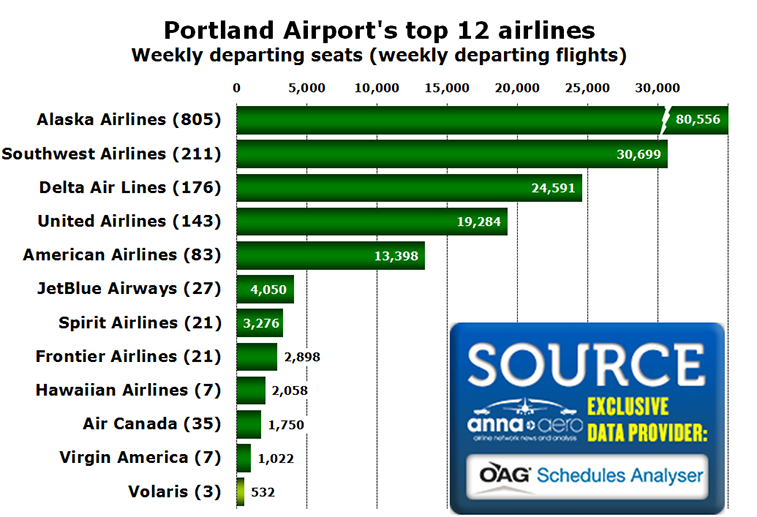 Weekly seat capacity at Portland has gone down 1.4% (when comparing data from this May with the same week last year), with five carriers posting growth, while Hawaiian Airlines and Air Canada saw their operations unchanged. Besides Icelandair, which touched down on 19 May, Portland has seen the arrival of Volaris (highlighted in bright green) with twice-weekly departures (Mondays and Saturdays) from Guadalajara on 6 October 2014. Moreover, the airport is gearing up to greet a new carrier in September, namely PenAir with twice-daily services from Crescent City. PenAir will codeshare with Alaska Airlines on the new route, thereby providing passengers access to Alaska Airlines’ large domestic network from Portland.

US Airways’ operations have been absorbed by American Airlines as part of their merger that was finalised in December 2014. Therefore, American — ranking fifth this year — posted massive increase of 95% this May. Nonetheless, Alaska Airlines has posted the biggest net increase in capacity this month as it had added an additional 5,283 weekly seats. Over the past 12 months, Alaska Airlines introduced twice-daily flights to Salt Lake City, but has ceased its daily operations to Atlanta and four weekly flights to Long Beach. By comparison, Virgin America provided the greatest capacity decline (-67%) at Portland, owing to having reduced its frequency on the 885-kilometre sector to San Francisco from thrice-daily to daily over the past 12 months. 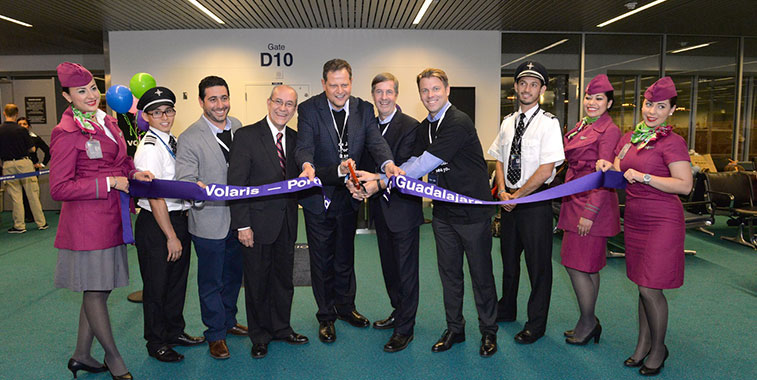 On 6 October 2014, Portland Airport celebrated with a ribbon cutting by Enrique Beltranena, CEO of Volaris (middle) the arrival of the Mexican LCC with twice-weekly flights from Guadalajara.