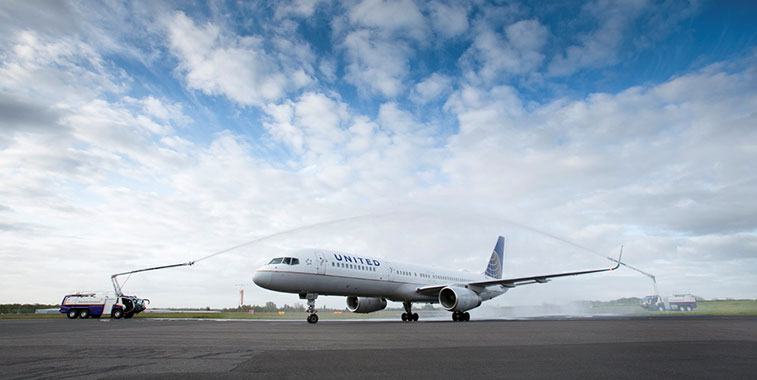 This one’s called ‘The Tyne Bridge’, can you guess where it is?

There were eight Fire Truck Water Arch (FTWA) entries this week in anna.aero’s “Arch of Triumph” competition, with a strong North American showing – half the arches were for routes to/from/in North America, albeit two arches from the same arriving then departing route from Reykjavik/Keflavik to Portland. Portland also wins this week with a seminal “Leaping Dolphin” arch which is the gold standard in FTWAs (you can download the anna.aero guide on how to do award-winning FTWAs here https://www.anna.aero/wp-content/uploads/2013/10/ftwa-instructions-generic.pdf). The Portland win knocks Birmingham (UK) out of pole position. But we have a strong feeling that’s not the last time they climb to the top of the chart with seven months of competition still to run this year.

Icelandair Reykjavik/Keflavik to Portland 19 May anna.aero’s Chief Analyst was on the first Icelandair flight to Portland so was able to make a special appraisal of the inside of this near perfect “Leaping Dolphin.”

Portland was only 3.3 points off a perfect score with this “Leaping Dolphin” – widely recognised by airport crews worldwide as the epitome of ARFF skill. This is confirmed by the 9.8 score by anna.aero’s Chief Analyst, Ralph Anker, who was on this inaugural flight allowing him to pass judgement from right inside the arch. (You can read his report here) The departing Portland arch (see below) was a different story….

KLM Amsterdam to Edmonton 19 May 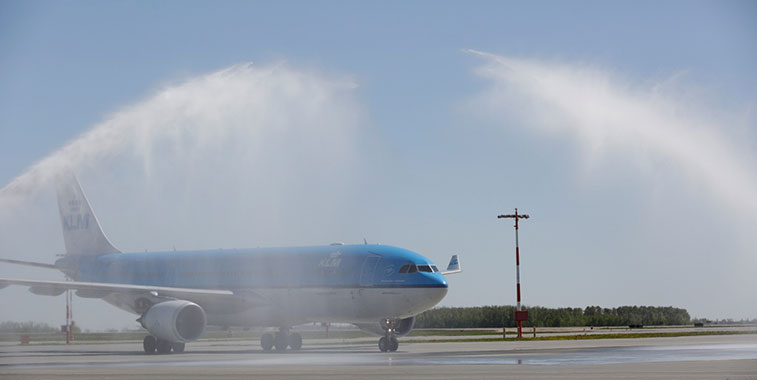 This arch is called a “Michael J. Fox” – after the diminutive 5ft 4in (163cm) famous son of Edmonton, and brave sufferer and Parkinson’s’ disease campaigner.

Judge’s Comments: This arch salutes Michael J. Fox who was born in Edmonton in 1961. After his blockbuster career as the star of the “Back to the Future” movies, today Fox is the champion of the Michael J. Fox Foundation for Parkinson’s Research www.michaeljfox.org which is dedicated to finding a cure for those living with Parkinson’s disease today. Having invested more than $450 million in research, the foundation is credited as “the most credible voice on Parkinson’s research in the world.” Along with Edmonton Airport we salute him today.

Icelandair Portland to Reykjavik/Keflavik 20 May 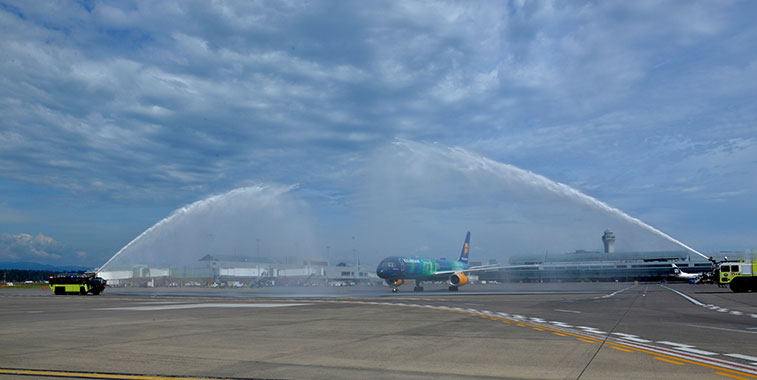 Portland’s departing Icelandair arch is called an Eyjafjallajökull. Can you guess why?

Judge’s Comments: Iceland’s Eyjafjallajökull volcano is the one that grounded much of Europe’s aviation with an ash cloud in 2010. So, having won this week’s prize with its “arrival arch,” it’s probably not all that surprising that Portland felt confident enough to perform a controversial choice of “departure arch.” Did they pull it off? Well we let the jury decide… 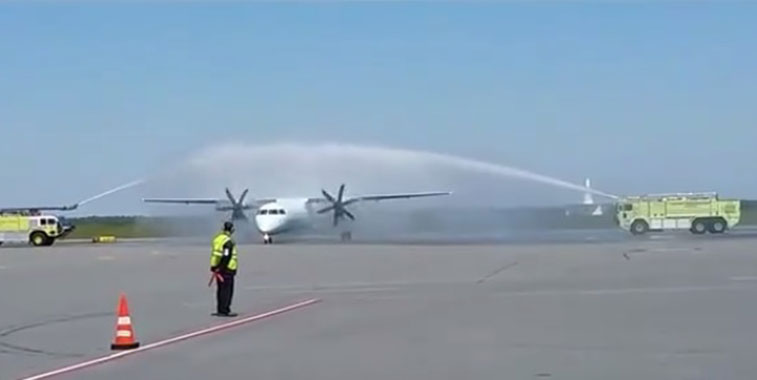 This is a “Taj Mahal” – not to be confused with the Indian arch named after the white marble mausoleum, rather than a Trump casino.

Judge’s Comments: Earlier this month Bengaluru Airport in India won a special prize for the highest-ever FTWA – 74.44 metres high. It was called the Taj Mahal because that is exactly the height of that great white marble mausoleum. This is also called the Taj Mahal – but this time it’s in honour of Donald Trump’s sadly troubled landmark Atlantic City casino. Carl Icahn has recently stepped in to help out…now didn’t he also once try to turn around TWA??? 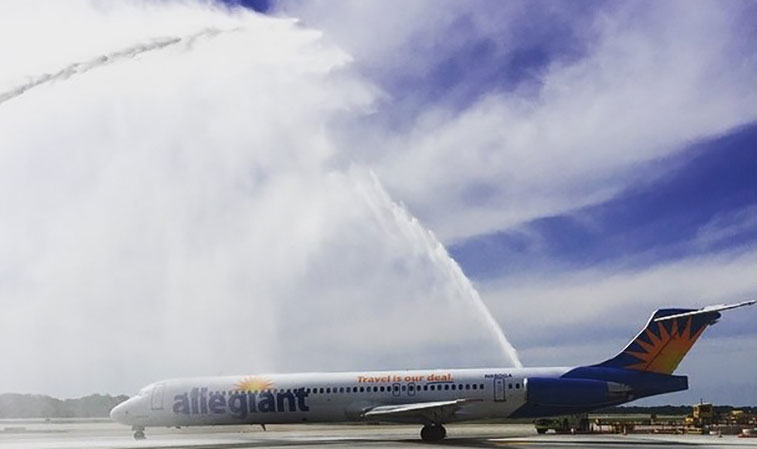 All of Memphis Airport’s arches are named after Elvis Presley songs. This one is called “Fountain of Love.” It looks even better if you hum the tune while studying it.

Now that’s quite a welcome for a really old Allegiant MD-80 dontcha think? Where DO they find them?

SunExpress Antalya to Memmingen 22 May 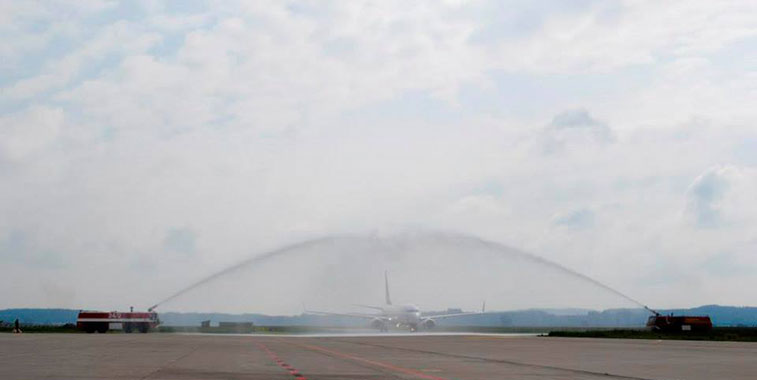 Judge’s Comments: Another superb Leaping Dolphin Fire Truck Water Arch. Beautifully-positioned trucks. Uncluttered apron. The ever-so-curvy arches. Perfectly-timed to the SunExpress 737-800 arrival. It’s so close, but Portland squeezed ahead this week with the same classic arch design – and sadly we only have one prize and one winner. Keep monitoring Memmingen, you guys are great sports-people!

Angara Airlines Nizhnevartovsk to Krasnodar 23 May 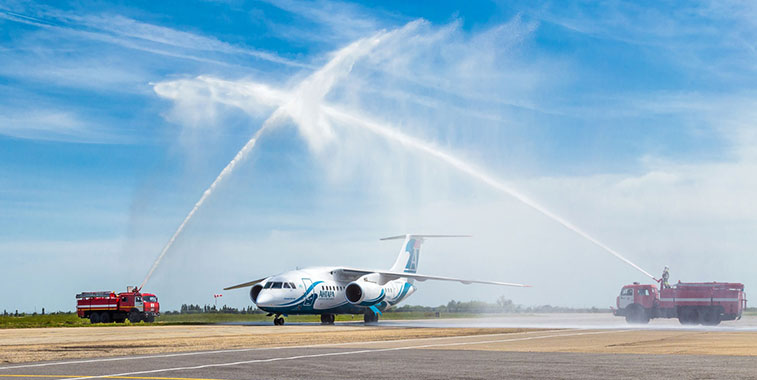 Krasnodar crews “do it standing up.”

Judge’s Comments: As we all know, it’s really hard to not have an arch affected by the powerful thrust of the Progress D-436 engines on an Antonov An-148. So you’ll notice some respect is given in the scores, plus the more-rare decision of the Krasnodar crews to “get on the roof” of their trucks. We like this and always award extra points for this sadly dying craft.

Well what else could it be? It’s called a Tyne Bridge and can only be created with these extended monitors.

Judge’s Comments: Newcastle Airport’s Phil Forster deserves some sort of a PR award for lobbying anna.aero this week, having melted the smartphones of all the anna.aero jurors with entreaties to vote for this great arch for a great route. The style is called a Tyne Bridge and can only be created with these extended monitors. The misting at the back is not a mistake, it’s called “The Fog on the Tyne” after the 1971 album by Lindisfarne. Everyone between Newcastle UK and Newcastle Australia can sing the tune – but nobody can remember anything else by Lindisfarne. However, this great FTWA will never be forgotten.