There were a record 26 airlines in attendance, hosting 44 meeting tables, at the ACI North America JumpStart Air Service Development Conference in Seattle between 1-3 June. This meant that 1,150 airline to airport meetings were made possible during the event.

When people think of Seattle, they are probably reminded of Starbucks, Frasier, or Tom Hanks finding it difficult to sleep. For anna.aero, it also means not getting much sleep in Seattle because we’ve been at it again – producing one of our trademark on-site-printed publications to place in the hands of all 400+ registered airline and airport delegates at ACI North America’s (ACI-NA) air service development conference – JumpStart.

The publication is packed with coverage of the latest routes being launched from many airports attending the conference, also includes an in-depth strategy interview with Kazue Ishiwata, Senior Air Service Development Manager, Seattle-Tacoma Airport, this year’s host of JumpStart. 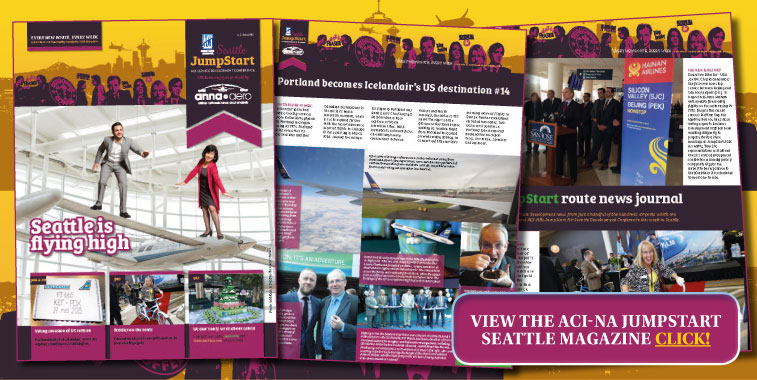 Listening to its members

The ACI-NA conference in Seattle was the inaugural standalone event dedicated wholly to air service development. This came about following a member survey the organisation undertook last year, when 45% of North American airport directors identified air service development as the biggest challenge facing their airports today. The result was a record-breaking airline attendance for JumpStart, with 26 carriers taking up 44 airline meeting tables. This meant that 1,150 airline-to-airport meetings were possible on the second day of the event.

The significance of the industry was highlighted by Kevin Burke, President and CEO, ACI-NA when he told the gathered delegates that 7% of the US’ GDP was generated by airports and airlines. He also confirmed that the four major airlines now dominate 85% of all flights and 90% of the revenues in the US. 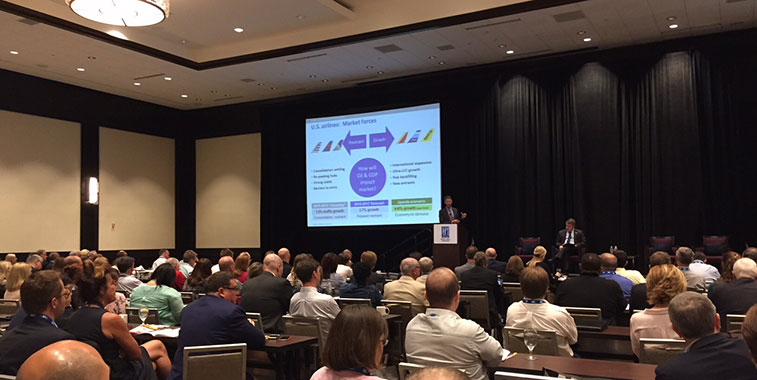 Using the event to announce two new routes was Brad Tilden, CEO, Alaska Air Group, which includes Alaska Airlines and Horizon Air, who was also the keynote speaker on Monday’s conference programme. Starting on 5 November the carrier will commence daily services between Portland and Austin-Bergstrom, as well as daily flights from Eugene to San Jose. Among Tilden’s more interesting sound bites were:

He suggested that his network planning team are “getting better all the time” in terms of their projections on new routes, as their margins of error on the start-up performance were narrowing all the time;

He went to school close to the airport, which was also near a park where Seattle’s third runway was built. Other guys went up to the park with their girlfriends to apparently ‘watch the airplanes’ – as he didn’t have a girlfriend “I just went up there to watch the airplanes.”

The airline group made the Fortune 500 (ranked 482) for the first time in its 82-year history in 2014. In fact, the airline has grown from being the 24th largest US airline 40 years ago, to now being the sixth biggest. However he did remark that the airline has passed nobody in those 40 years to gain that spot – all the other airlines either went bust or were acquired by another carrier;

His view was that the health of the industry was getting better, and that it may well be less cyclical in the future partly because the last downturn was so bad. The first day of the JumpStart event ended with a Welcome Reception in the Fifth Avenue Room in the Westin Hotel, before over 200 delegates departed at 1830 for Safeco Field for the ballgame between the New York Yankees and the home side, the Seattle Mariners. Unfortunately, the local team’s star player Félix ‘King’ Hernández was powerless to stop the Yankee onslaught, with the Mariners losing the game 7-2.