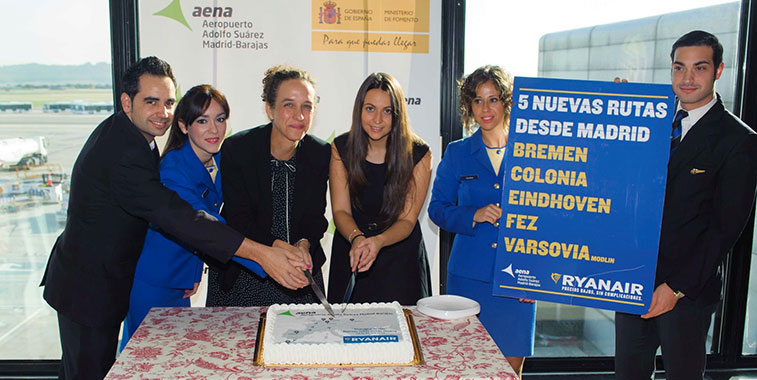 The launch of five new routes from Madrid Airport last October helped Spain’s busiest airport to become the recipient of more additional Ryanair flights this summer than any other airport apart, from London Stansted.

Fresh from reporting another set of excellent financial results for its last financial year, Ryanair’s summer schedule will see it increasing peak season seat capacity in 2015 by around 8% across a network of 184 airports in 30 countries. However, this growth is far from even across all of its country markets as anna.aero’s analysis of OAG Schedules Analyser data shows. While 12 of the top 15 country markets will see an increased Ryanair presence, three countries (France, Norway and Sweden) will see a reduction in the airline’s flights this August. 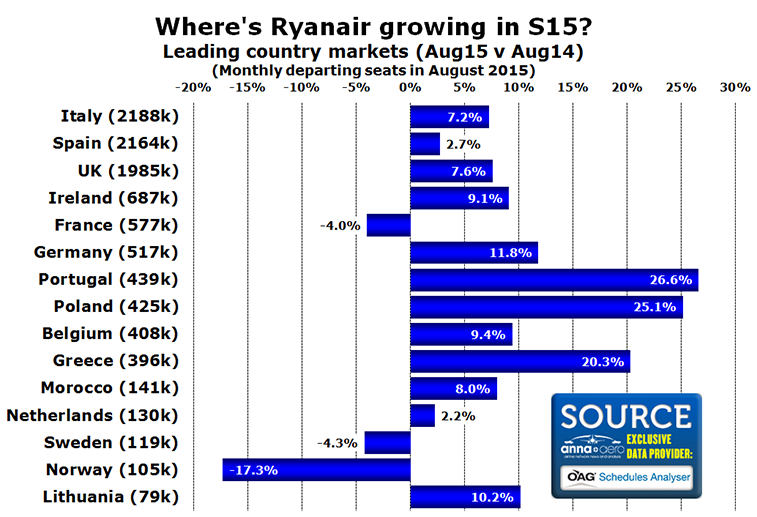 Italy has this year overtaken Spain as Ryanair’s leading country market for summer flights, with the Spanish market growing by less than 3%, while Italian services are up over 7%. Growth of over 25% in both the Polish and Portuguese markets see them both leapfrog over Belgium compared with the same period in 2014. Sweden swops places with Norway, while Lithuania is new in the top 15 replacing Malta which slips to 16th spot. Among the smaller country markets Romania has seen a 190% increase in flights while the Czech Republic is up almost 120%. All 30 countries served last summer are still served in 2015.

Looking more closely at the data reveals which airports have seen the biggest increase in weekly flights over the last 12 months. This clearly confirms Ryanair’s preference for growing at larger airports, serving major cities. In fact, the seven fastest-growing Ryanair airports in the last 12 months are all serving capital cities across Europe. Among the other fast-growing airports are three airports not served by Ryanair a year ago; Copenhagen and Glasgow which are new bases, and Gothenburg’s main airport which the airline is now using due to the closure of Gothenburg Save to commercial operations. Cologne Bonn became a base last October, though Ryanair was serving the German airport from other bases before then. 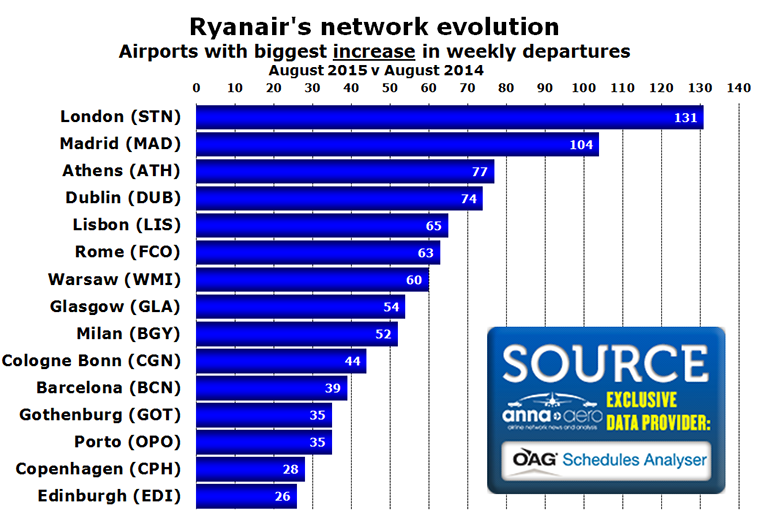 but some leading country markets will see 25% growth while at least one will see cuts of over 15%. We reveal what’s going at a country and airport level. Ryanair is growing peak summer capacity by around 8%