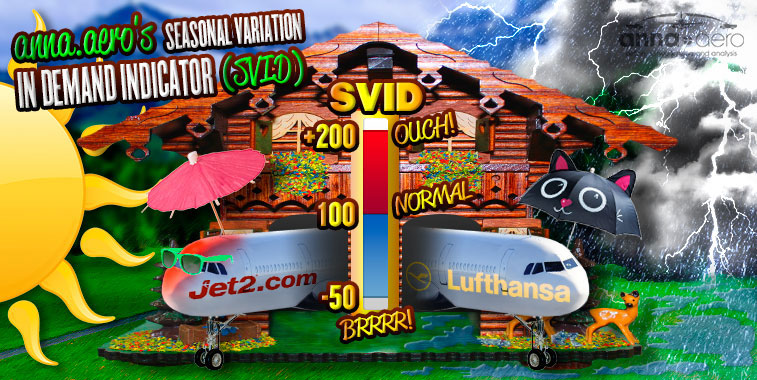 Using our incredible Seasonal Variation In Demand (SVID) calculator, a score of zero would represent no seasonality at all. We found Jet2.com to be the most seasonal low cost airline with a SVID score of 44.15. In contrast, the least seasonal legacy airline is Air France with a SVID score of just 0.47. In fact none of the big flag carriers are far behind. As usual we grossly misrepresent Lufthansa here because it made our cartoon look good.

One of the basic realities of the aviation industry is that passenger demand on any given route varies across the year, not only by month, but also by day of week and even hour of the day. Airlines have to find a balance to try and match demand with capacity in the most profitable way. The profile of demand for business services is very different from the demand for leisure services, so airlines with different business models face different challenges. This week anna.aero takes a look at the seasonality (on a monthly basis) of some of Europe’s leading low-cost carriers (LCCs) and legacy carriers. Using data for a whole 12-month period from the beginning of the Winter 14/15 season (November 2014) to the end of the Summer 15 season (October 2015) we reveal which airlines have the most extreme seasonality profiles in terms of scheduled seat capacity.

Norwegian and Jet.com are the two LCC extremes

Among a basket of eight LCCs headquartered in deregulated European countries two stand out as having particularly extreme seasonality profiles; Jet2.com and Volotea. Using the same mathematical formula as anna.aero uses to calculate its Seasonal Variation In Demand (SVID) score for airports, we can calculate SVID scores for airlines. On this basis Jet2.com is revealed to be the most seasonal airline among the LCCs studied with a SVID score of 44.15, which is higher than the 38.49 recorded by Volotea. 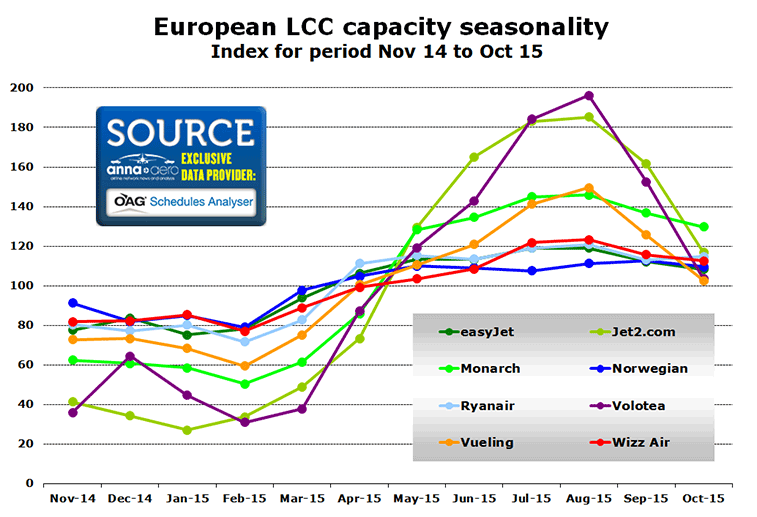 The least seasonal LCC is Norwegian, which operates a significant proportion of its network on intra-Nordic routes with relatively high frequencies and targeting less seasonal business passengers. As a result, Norwegian scores just 1.71 (a score of zero would represent no seasonality at all), well ahead of Wizz Air (3.01), easyJet (3.23) and Ryanair (4.13). That just leaves Vueling (10.09) and Monarch Airlines (17.18) which are both at present reasonably seasonal airlines, with a strong presence in the seasonal Spanish leisure market. Ryanair’s relatively low score is a reflection of the airline’s recent focus on bigger airports and routes with a higher proportion of business traffic. The same analysis on Ryanair’s seat capacity for the period November 2012 to October 2013 would result in a significantly higher SVID score of 6.66, indicating greater seasonality. Jet2.com has added well over 20 new routes to its network this summer, but the majority will not operate this winter. As a result, the carrier has the highest SVID score (44.15) of the 16 airlines analysed in our study, beating Volotea (38.49).

For Europe’s legacy carriers (or flag-carriers if you will) a further eight airlines were selected, including most of the largest carriers. Seven of the eight produced a SVID score of less than two, indicating relatively little seasonality in their scheduled seat capacity. When looking at the two graphs it is important to notice the scale on the vertical axis. In the case of the legacy carriers graph it covers a much smaller band (from 60 to 140) than in the case of the LCC graph (0 to 200). The least seasonal airline among those studied is Air France with a SVID score of 0.47, just edging out British Airways (0.54). Lufthansa ranks third with a score of 1.07, ahead of Iberia (1.15), SAS (1.61), Alitalia and Turkish Airlines (both 1.62). The exception here is Greece’s Aegean Airlines which scores 7.11 due to the seasonality inherent in the Greek market, which attracts a large number of leisure travellers during the summer months. 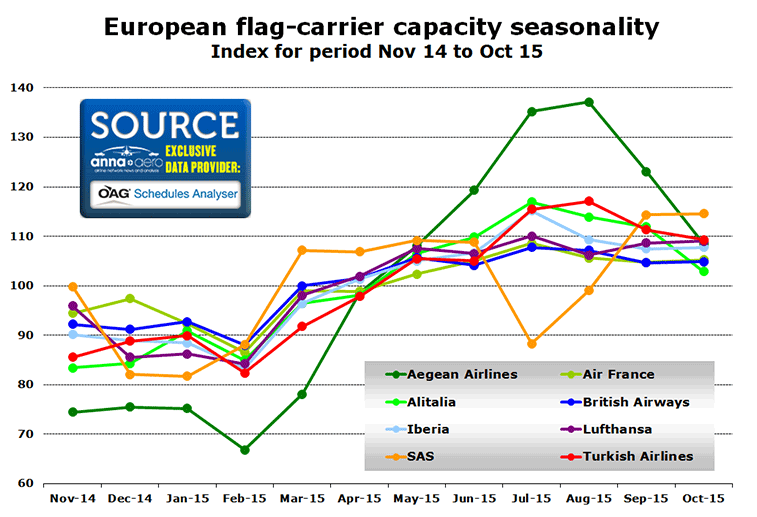 The other rather odd profile is that of SAS which, like Norwegian, is strongly focussed on business routes. In July and August when most carriers are adding capacity to cater for leisure passengers taking their annual summer holiday, SAS actually sees a significant decline in seat capacity. This dip is confirmed by the airline’s monthly passenger figures in recent years. While most airlines here schedule between 10% and 40% more seats in August than they do in November, for SAS the figures are almost identical.

British Airways scores best if ASKs are measured instead

This analysis has been done using scheduled seat capacity. If instead ASKs (available seat kilometres) were used as the metric under analysis (which takes into account sector length) the results among the legacy carriers at least would be slightly different. British Airways would now be the least seasonal with a score of just 0.36 (reflecting its strong year-round long-haul traffic to the US), ahead of Air France (0.67) and Turkish Airlines (1.22). Helping British Airways to keep its seasonality profile as flat as possible are new winter routes from London Gatwick to Fuerteventura and Friedrichshafen which both began last December. This coming December the carrier will launch routes from London Heathrow to Reykjavik/Keflavik and Salzburg.