The first ever Routes Middle East and Africa summit took place between 31 May and 2 June, held at the Gulf Hotel Convention Centre in the Kingdom of Bahrain. Among the 350 delegates from the Middle-East, Africa, South Asia and Europe were attendees from Oman Airports Management Company. The Airports Company had an exhibitor stand, with an aim of welcoming delegates to experience Omani hospitality and culture. The event was hosted by the Minister of Transportation, H.E Engineer Kamal bin Ahmed Mohammed, Kingdom of Bahrain. The summit included valuable panel discussions, one to one meetings, as well as talks with leading experts in the aviation industry. Oman Airports Management Group are looking forward to developing direct routes with African carriers and partner airline, Oman Air, to enhance connectivity to the country’s Muscat hub. The company aims to have a couple of new airlines starting operations from Muscat during this year, and more routes are in the pipeline for 2016.

Melbourne Airport celebrates with the certificate for ‘Route of the Week’ awarded for the launch of services by Air China from Beijing on 1 June. Pictured celebrating the achievement are: Susan Su, Business Development & Liaison Manager for China; and Damian Tkalec, China Aeronautical Development Manager. The aircraft was welcomed to the Australian city with a superb water arch salute. 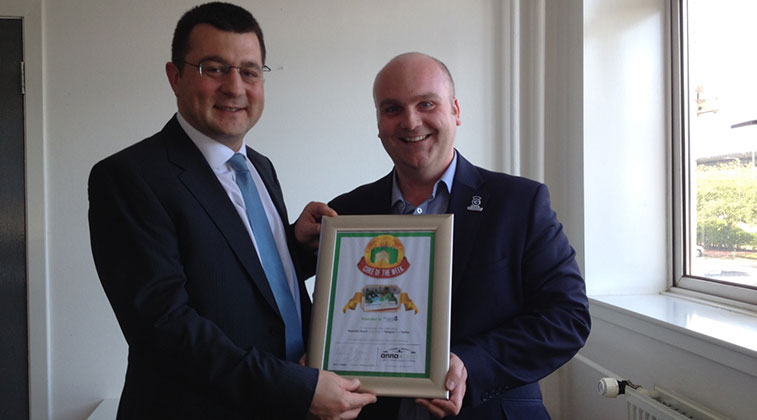 Glasgow Airport’s Francois Bourienne and Steven Marshall celebrate with the certificate for ‘Cake of the Week’, awarded for the excellent cake presented at the launch of WestJet services between Halifax and Glasgow on 29 May. Flights operate daily on the seasonal sector until 24 October, using the airline’s tartan-themed 737-700. Pobeda launched services between Sochi/Adler and Kazan on 31 May. The 1,505-kilometre route will operate a weekly (Sunday) service using 737-800s. The aircraft was greeted in Kazan with a traditional fire truck water arch. Ellinair launched a new service on 4 June from Novosibirsk to Thessaloniki. The new service will operate every 10 days, utilising 737-300s. To celebrate, passengers were welcomed with a slice of cake that was cut by tour operator and airport team representatives along with: Igor Leontiev, Head of Novosibirsk Airport’s Aviation Marketing Department; and Olga Podbornova, Commercial Director of Mouzenidis Travel in Novosibirsk. Flybe celebrated the one year anniversary of its London Southend services to Groningen, Münster/Osnabrück and Rennes on 5 June. All these destinations are operated on behalf of Stobart Air. Rennes Airport celebrated with a special one year birthday cake. The airline also celebrated the news that it had just carried 100,000 passengers on its Caen route from the London airport, a route that celebrates its one year anniversary on 3 July. Stobart Air CCO, Martin Saxton, celebrated the success of services by saying: “For the 5 million people living within an hour of London Southend Airport, these routes offer them direct access to some of Europe’s most charming and cultural destinations. For our European passengers, this is the first direct connection to London, linking a whole new audience to one of the world’s most important cities, whether for business or pleasure.” On 1 June, transavia.com France launched its newest route from Paris Orly to Valencia. Flights will operate six times weekly using the airline’s 737-800s and faces direct competition from Vueling, who operate a four times weekly service on the airport pair. 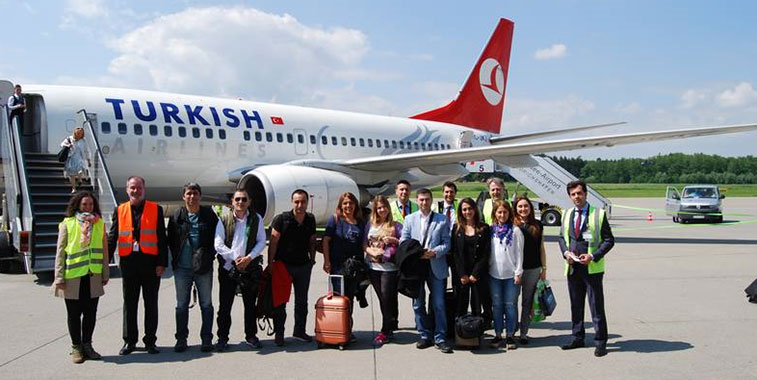 Friedrichshafen Airport welcomed nine Turkish TV and press journalists for a visit to the south Baden-Württemberg region between 27 and 30 May, as part of a PR campaign to help promote the area in the Turkish media. The visit included excursions to the Zeppelin and Dornier museums, the Zeppelin factory and an airship tour. Welcoming the journalists on arrival were: Franziska Buckreus, Tourism Information Office, Dietmar Philipp, Friedrichshafen Director of Tourism; Cüneyt Sürer, Turkish Airlines; Stefan Liebenz, and Andreas Humer-Hager, of Friedrichshafen Airport; and Hayrullah Dag.