Boeing leads the wide-body race, while Airbus matches on single-aisle deliveries in May 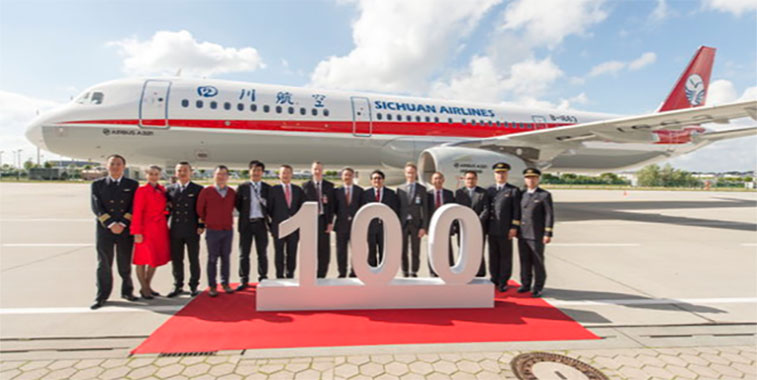 On 22 May, Sichuan Airlines celebrated their successful partnership with Airbus at a ceremony in Hamburg, marking the delivery of the airline’s latest A321, becoming the 100th aircraft for the Chinese carrier.

Following 128 airframes being handed over in April, Airbus and Boeing slowed down their deliveries in the fifth month of this year to 107. However, the American manufacturer maintains the lead over its European rival in terms of aircraft delivered in May, by delivering an extra 13 units. With this, Boeing strengthened its lead in the 2015 delivery race to 67 units, up from 54 in April.

Having delivered more than 100 aircraft for the fourth month in 2015, the two manufacturers have once again recorded an impressive total so far this year. The combined deliveries of both producers for the fifth month of the year, was 107, of which 60 came from Boeing and 47 from its European counterpart. Notably, while the American manufacturer has increased its unit lead, the company has also improved the number of aircraft deliveries when compared to the same month last year (54 for May 2014). By contrast, Airbus delivered eight less units compared to the same time period in 2014. Overall 67% of deliveries from both manufacturers in May were narrow-body aircraft, which is down from April, which recorded a figure of 73%. 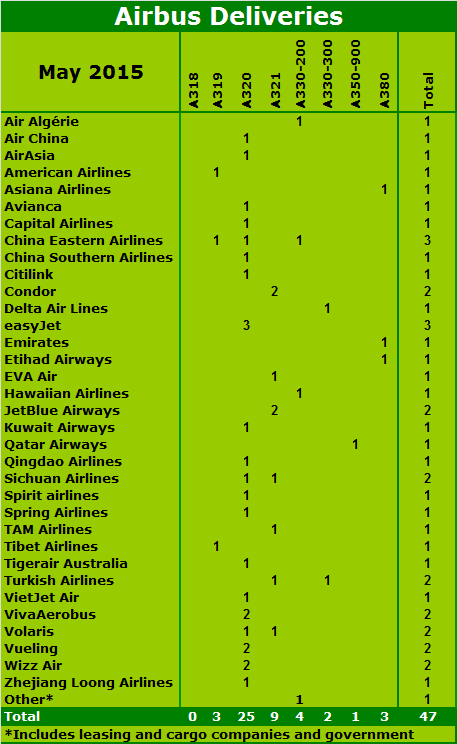 Airbus ended May with a total of 47 units being delivered to airlines, which constitutes 15 less airframes than the amount delivered in April, and eight less than in the corresponding month last year. Over the period of January to May in 2015, the European producer delivered 243 units, representing a decrease of just over 2% (five less units) on the same period in 2014.

Once again, single-aisle deliveries in May were led by the A320 (25 units), with 37 single-aisle aircraft provided to carriers around the world. easyJet, who received aircraft #250 from Airbus last month, was one of nine airlines to receive more than one narrow-body unit from the European manufacturer, as it incorporated an additional three A320s into its fleet. Apart from this, other noteworthy carriers to receive more than one unit were China Eastern Airlines (one A319 and one A320), Condor and JetBlue Airways (both getting two A321s), Sichuan Airlines (one A320 and one A321), VivaAerobus (two A320s), Volaris (one A320 and one A321), and finally Vueling and Wizz Air (both received two A320s).

Looking at wide-body deliveries, Airbus handed over 10 airframes in May, accounting for two less units than in the April 2015, but the same amount as in the corresponding month of 2014. Following April’s delivery of three A380s, the European producer handed over the exact same amount of the type in May, one to the largest operator of the A380 — Emirates, and one each to Asiana Airlines and Etihad Airways. Finally, one A350-900 was delivered to Qatar Airways. 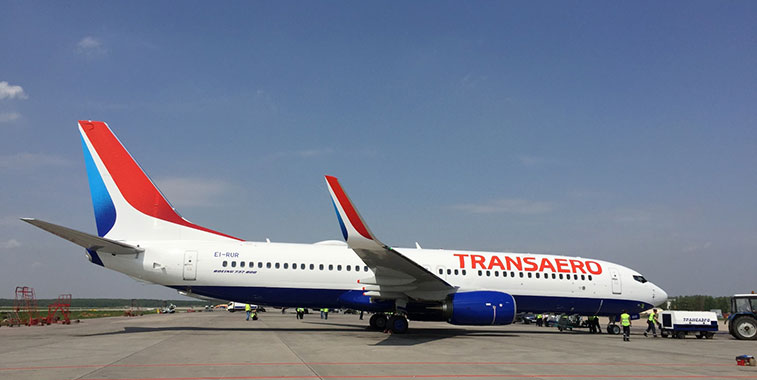 Transaero Airlines took delivery of its first next generation 737-800 on 22 May, sporting a new livery. The aircraft is seen arriving after its delivery flight at Moscow’s Domodedovo Airport. 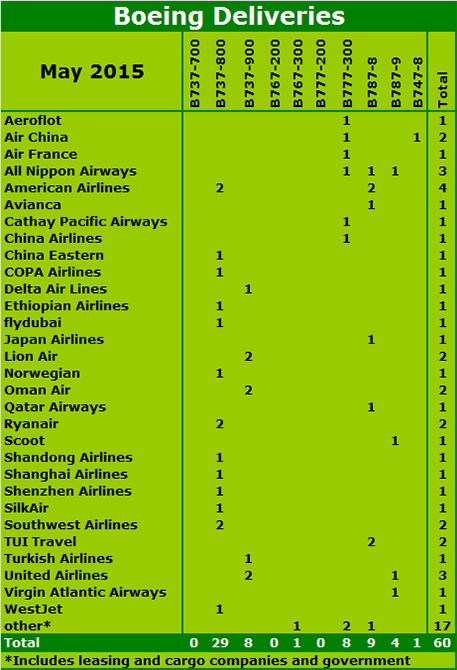 Airlines received a total of 37 single-aisle units from Boeing, six units less than April, and figure equal to that delivered by Airbus. American Airlines, Ryanair and Southwest Airlines were the largest recipients of the 737-800 in April, as each incorporated two of the variants into their respective ever growing fleets. Lion Air, Oman Air and United Airlines all received two 737-900s. In total, 18 airlines were delivered single-aisle units from the American manufacturer during May.

Analysis of the wide-body deliveries reveals that Boeing handed over a total of 23 units to airlines in May, matching the amount delivered in April. Moreover, the American producer improved on its performance for wide-body deliveries in 2014, supplying eight more of the types, compared to the 15 units it managed in the same month last year. Boeing handed over 13 787s in May, increasing from the eight units it delivered in April. American Airlines and the TUI Travel Group each incorporated two 787-8s. In addition, four 787-9s were received by airlines, improving on the three units deliveries in April. Recipients of the type were All Nippon Airways, Scoot, United Airlines, and Virgin Atlantic Airways. One 747-8 was delivered to Air China as well last month.