Vancouver Airport on track for 20 million passengers in 2015; Air France and Aeromexico are newest carriers as Air Canada dominates Vancouver International Airport celebrated the arrival of Air France services from Paris CDG at the end of March with padlocks, a ribbon-cutting ceremony and an amazing Eiffel Tower-shaped cake. The French capital is also served by Air Transat with twice-weekly flights.

Vancouver International Airport, Canada’s second busiest after Toronto Pearson, is on track to break through the 20-million passenger milestone in 2015, having handled 19.4 million in 2014, its busiest ever year. Domestic passenger numbers passed 10 million for the first time while trans-border (US) and international demand were also at all-time highs at the airport. 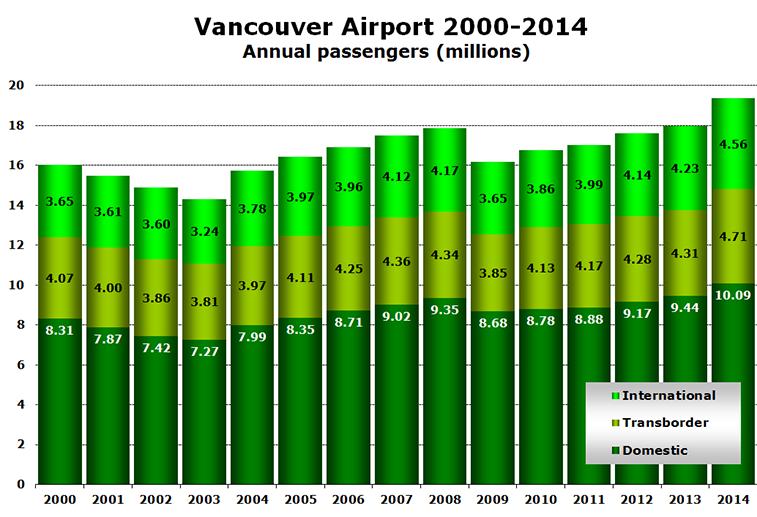 In the first four months of 2015 passenger numbers are up 5.5%, with year-on-year growth in every month. Growth has been particularly impressive in the trans-border market (up 13.1%), with international traffic up 4.3% and domestic demand growing more modestly by just 2.4%. August is the airport’s busiest month while February and November are the quietest months. The airport’s seasonality profile gives it a SVID score of 2.07 (“good”) which compares favourably with Seattle-Tacoma Airport (2.80, also “good”) the major US gateway which is just 200 kilometres to the south, which last year handled almost twice as many passengers as Vancouver. 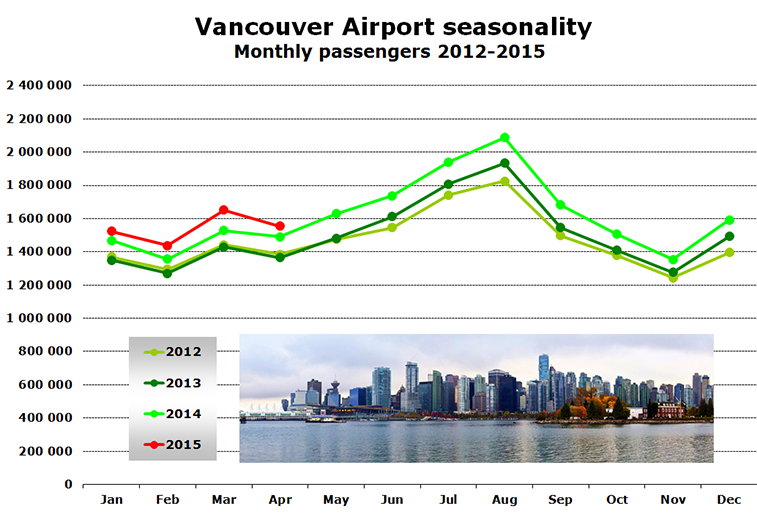 Air Canada is the leading airline in Vancouver with 47% of flights and 43% of weekly seats, well ahead of WestJet, who account for 18% of flights and 20% of seats. US carriers United Airlines, Delta Air Lines and Alaska Airlines are the next busiest carriers, with Philippine Airlines and Cathay Pacific Airways the biggest Asian carriers at the airport. Philippine Airlines operates 11 weekly flights from Manila with four offering onward flights to Toronto Pearson and another four to New York JFK. A total of 33 airlines offer scheduled services this July according to OAG Schedules Analyser data. These include British Airways, Condor, Edelweiss Air, Icelandair and KLM from Europe. They were recently joined by Air France, who began non-stop flights from Paris CDG at the end of March.

This July, passengers have a choice of 86 non-stop destinations from Vancouver. These include many international destinations in Asia, Europe and the USA, as well as Mexico. One new destination for 2015 is Osaka Kansai in Japan. Air Canada rouge began five times weekly flights on this route at the beginning of May. The airport’s top 12 routes in terms of weekly seats this July include six in Canada, three in the US and three long-haul routes, of which two are in Asia (Beijing and Hong Kong) and one in Europe (London). 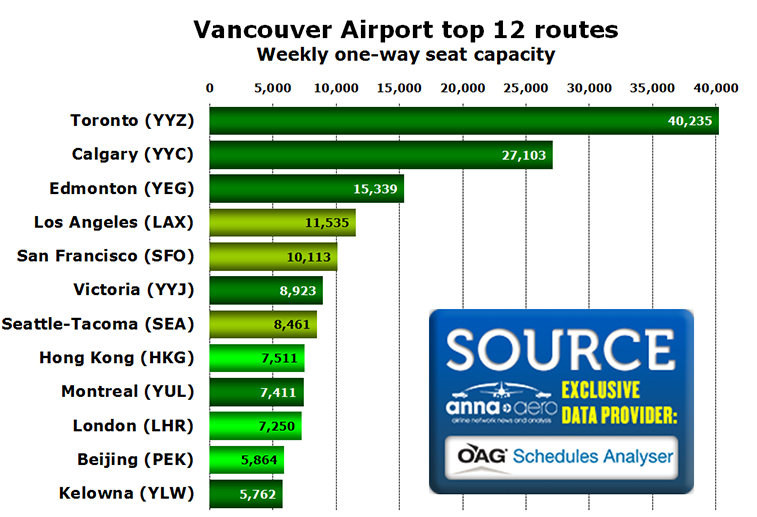 At present, the only additional new service that Vancouver is expecting to welcome in 2015 is the introduction in December of non-stop flights from Mexico City with Aeromexico. These will compete with Air Canada’s existing service. 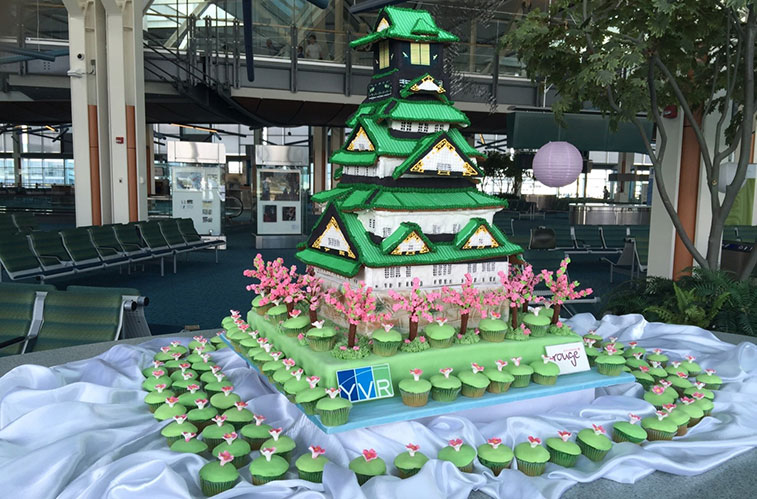 When Vancouver International Airport bakes a route launch cake they really go for it. This impressive edifice was built to celebrate the launch on 1 May of Air Canada rouge’s new service to Osaka Kansai, the first connection to that Japanese city. The route will be served five times weekly and joins Air Canada’s existing service to Tokyo Narita.