ACI EUROPE Prague: ‘Cawley The Incredible’ has just one week left to save the world 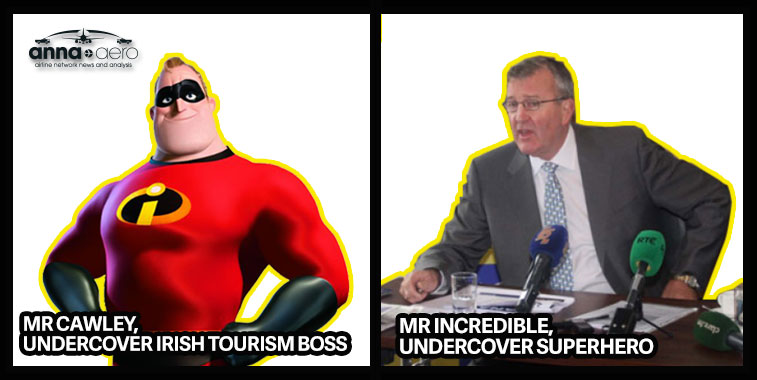 The incredible Cawley returns to save Europe’s airports from unprofitability.

Once he was a superhero flying around Europe, transforming the lives of ordinary consumers with low fares. But now the old Ryanair has gone. The times when its senior directors could burst through the window and rescue a country the day after its national flag carrier had gone bust are all over.

Now, in the Ryanair era of “Customer Charters” and “Always Getting Better” programmes, its former heroes have been forced into civilian relocation programmes. Yes, that really could be Michael Cawley, ex-Deputy CEO and COO of Ryanair, standing next to you on the metro, briefcase and packed lunch in hand, on his way to his desk as Chairman of Fáilte Ireland, the Irish national tourism development authority.

But Michael seems unsatisfied with suburban life and his white-collar job. And one day earlier this year he got a mysterious invitation to return to the glory days. He readily accepted and next week he will be back on the centre stage to deliver a keynote address to ACI EUROPE’s Annual Congress in Prague: “Airports are the gateways to Europe’s tourism markets, but most are also loss-making. Is this inevitable, or are there better ways?”

KERPOW! Michael Cawley was once simultaneously the most-welcomed and most-feared man to ever set foot in the board room of literally hundreds of airports across Europe. It was his job to do many of the deals that would result in a new Ryanair route – a route which could be the making of that airport’s city or region.

And now he’s back with information from the other side. An imposing figure on many levels, this could be Cawley’s chance to save the world of European airports – ACI EUROPE says that 60% of its members are loss-making enterprises. Whatever can the Irish tourism leader have to say? Will he have a viable idea for how they can change their business model? Can they really start making profits in an era dominated by permanently low-fare-demanding consumers and the reality of low cost airlines (albeit nicer ones). Your journey to prosperity begins by pressing this magic button: