JetBlue Airways launched operations back in February 2000 when it began flying between New York’s JFK airport and Fort Lauderdale in Florida. By the end of the year it was flying to 11 destinations from JFK using A320s. Its network continued to grow in the following years and JetBlue this summer will serve 67 destinations non-stop from its main base, 41 of which are in the US. All but five will be served with at least daily flights. Measured by weekly seat capacity the carrier has long been JFK’s second biggest after Delta Air Lines. JetBlue now accounts for 27% of movements at JFK, 22% of weekly seats but only 11% of weekly ASKs (Available Seat Kilometres). Delta not only offers more seats but also more destinations. The only other airline with more than 3% of weekly seat capacity at JFK is American Airlines, which serves 47 destinations and has a seat share of 11.5% at the airport. 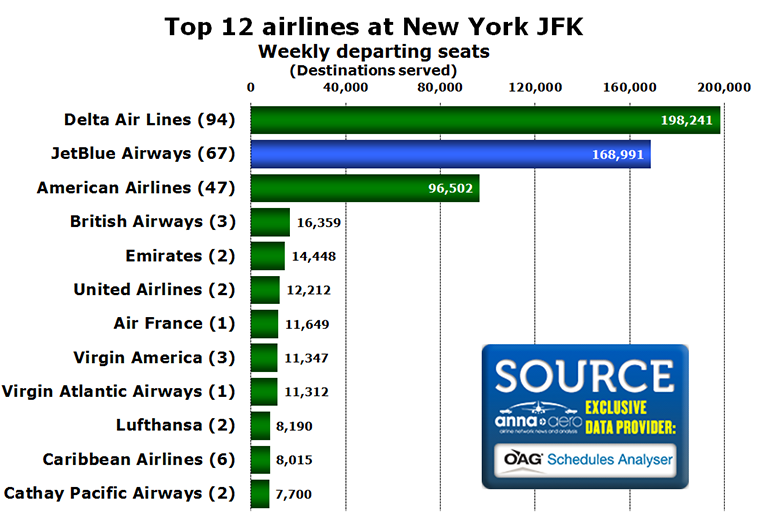 While JetBlue has continued to grow its route network at the airport almost every year since launch, analysis of weekly departing flights during the peak summer period of August shows that this peaked in the summer of 2007 when the airline was serving 49 destinations non-stop. Since then the number of weekly flights has remained relatively stable at between 1,120 and 1,220 but the number of destinations served has now increased to 67. 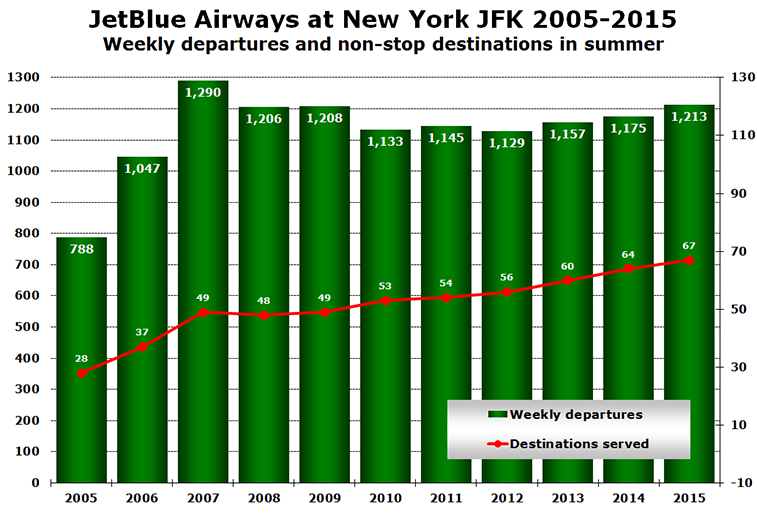 As a result, the average weekly frequency for JetBlue’s routes at JFK has fallen from 26.3 flights per week in 2007 to 18.1 flights per week in 2015. The airline’s most recent route additions have been Reno in Nevada (on 28 May) and Grenada (on 11 June). Last year saw three new destinations added from JFK; Port of Spain (on 24 February), Hyannis (on 26 June) and Curaçao (on 2 December).

According to anna.aero’s research, JetBlue has only ever dropped three routes from JFK in the 15 years since it began operating there. These are Ontario (California), Pittsburgh (Pennsylvania) and Richmond (Virginia). A churn rate of less than 5% after 15 years is pretty impressive for any airline, never mind one that was new to the market back in 2000.

A total of eight destinations are served with at least seven daily flights at the beginning of August, with Orlando leading the way with 10 daily flights. However, if we take into account sector length and aircraft type (the airline now also operates Embraer E190s, as well as A320s and A321s) the busiest routes in terms of weekly ASKs are now in California; Los Angeles and San Francisco. These are followed by three routes in the Caribbean, and then Orlando. Eight of the top 15 routes by ASKs are in the US (dark green bars). 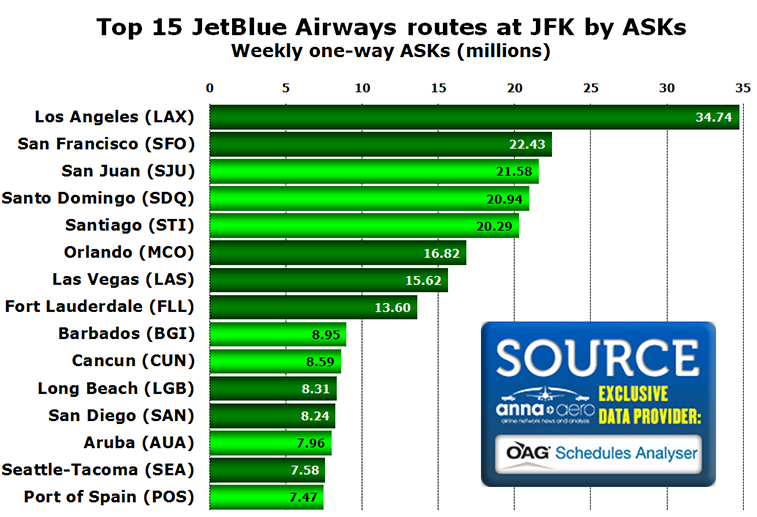 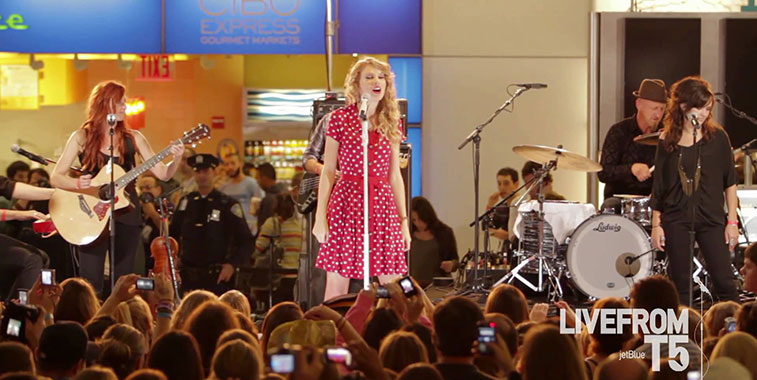 JetBlue operates out of Terminal 5 at New York JFK, a new terminal that was opened in October 2008 adjacent to the famous Eero Saarinen designed TWA terminal. The new terminal occasionally hosts live music performances including Taylor Swift in October 2010.