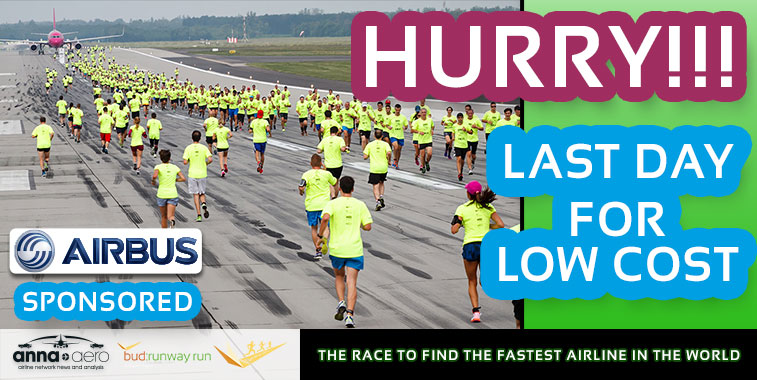 The Airbus-sponsored anna.aero-Budapest Airport Runway Run. So far almost 200 runners have registered, comprising of 22 airlines and 38 airports. 609 took part in 2014 with 1,000 entrants targeted this year.

Today is the last day to get the lowest possible price for the Airbus-sponsored anna.aero-Budapest Airport Runway Run – its €30 today but goes up to €50 tomorrow. Of course we’ll be delighted to take the extra money from you, as all entry fees are entirely donated to international child cancer causes and a Hungarian charity assisting with the inclusion of handicapped people in sports. 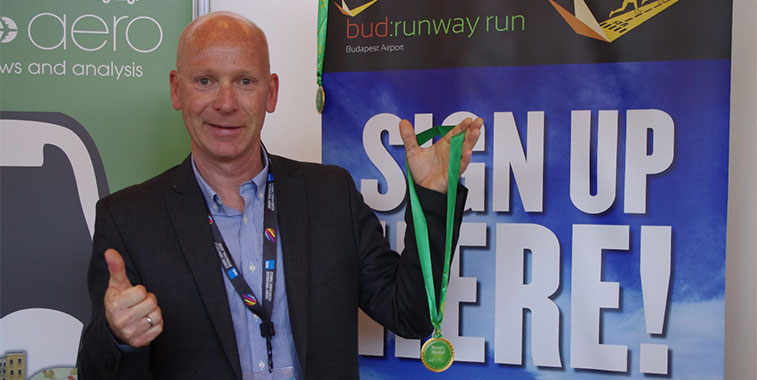 The Airbus-sponsored anna.aero-Budapest Airport Runway Run takes place on the airport’s runway 13R-31L at 11.00 on Saturday 5 September 2015. There are two race distances – 10km (four runway lengths) and 5km. Runners can take part on an individual basis, or form teams of three or more (only the fastest three runners’ times count towards the team times). Last year’s winner of “The Fastest Airline in yhe World” was Aer Lingus, which will compete again this year, once again led by its CEO, Stephen Kavanagh. So far almost 200 runners have registered, comprising of 22 airlines and 38 airports entering teams and individual runners. 609 took part in 2014 with 1,000 entrants targeted this year. The outlook seems very promising with bookings ready up over 300% on this time last year. This article features just some of the “live” involuntary signings made during June’s IATA Slot Conference in Vancouver and at the ACI EUROPE Annual Congress in Prague (we thank the organisers for having us.) 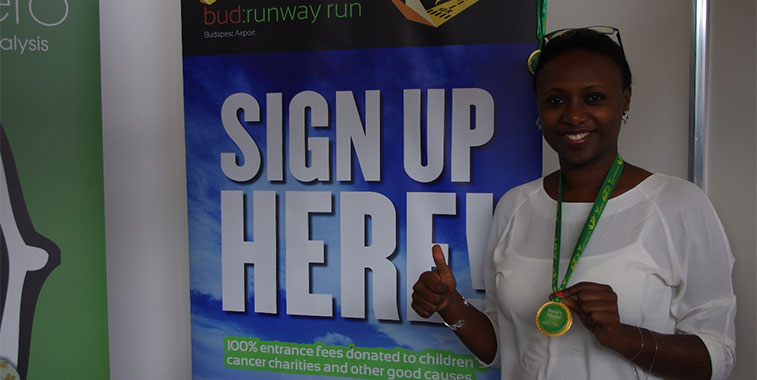 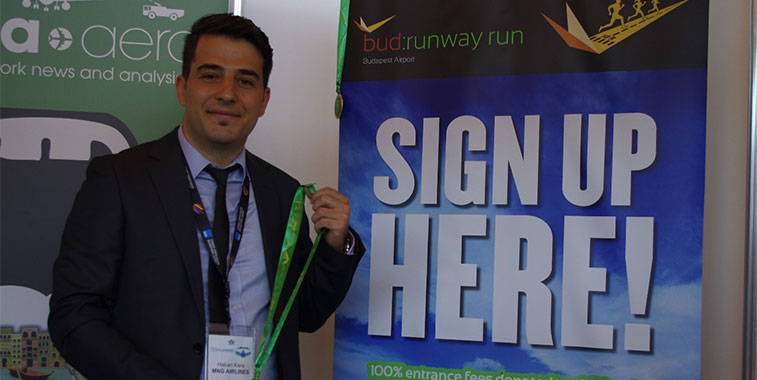 “I’m in” – Hakan Kara, MNG Airlines’ Schedule & Planning Specialist, is the first to admit he won’t be the fastest runner on Budapest Airport’s runway in September, but believes the fitness-enthusiasts among his colleagues back in Turkey will be able to put a training schedule together for him. 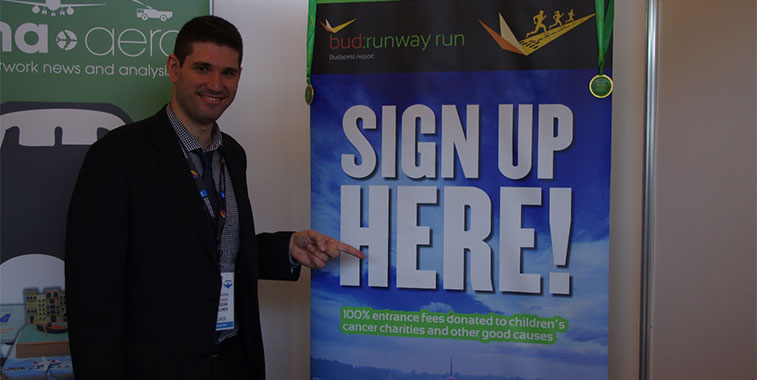 “I’m in” – after Aegean Airlines participation at last year’s anna.aero-Budapest Airport Runway Run, the carrier’s Scheduling Specialist, Alexandros Deligiorgis, is eager to join this year’s team. Speaking in Budapest last year, Aegean Airlines team captain, Christina Kitsopoulou gave the race a ringing endorsement: “Thank you for the great organisation, it was an amazing experience for all of us! I really enjoyed it personally! The city is beautiful…” 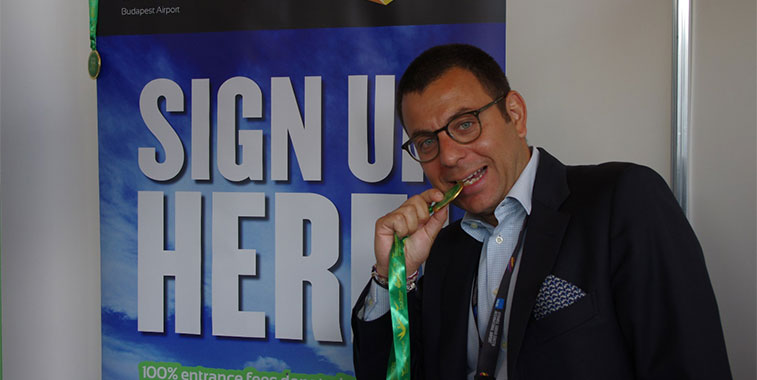 “I’m in” – the arrival of his first-born meant Raffaele Pasquini, Route Development Manager, Aeroporti di Roma, missed the opportunity to take part in last year’s run. Determined to join the race this year and make it a family affair, Pasquini is putting his son, Leonardo, forward to challenge the daughter of anna.aero’s publisher, Queenie B. Hogan – last year’s ninth fastest female runner and youngest competitor at 11 months old. 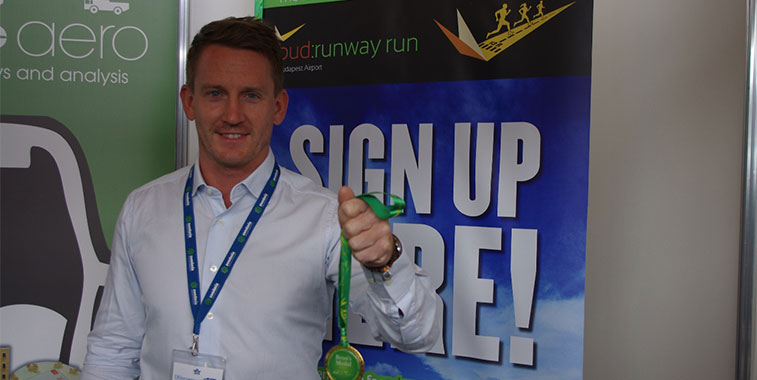 “I’m in” – Carl Andersson, Swedavia’s Route Development Manager. “There’s numerous runners within Swedavia; some fanatical, a few novices, but all enthusiastic about the idea of going to Budapest to race on the runway.” 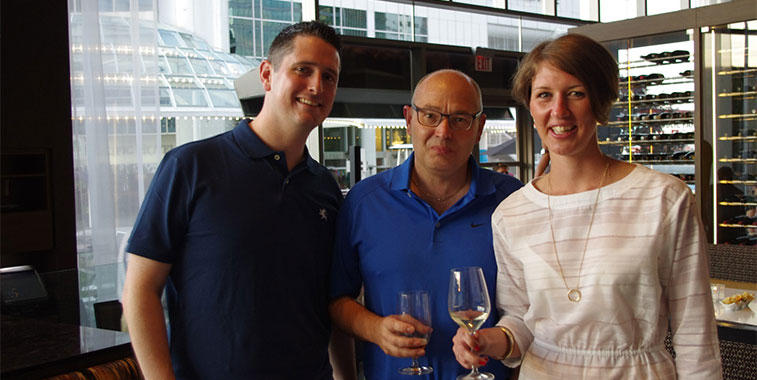 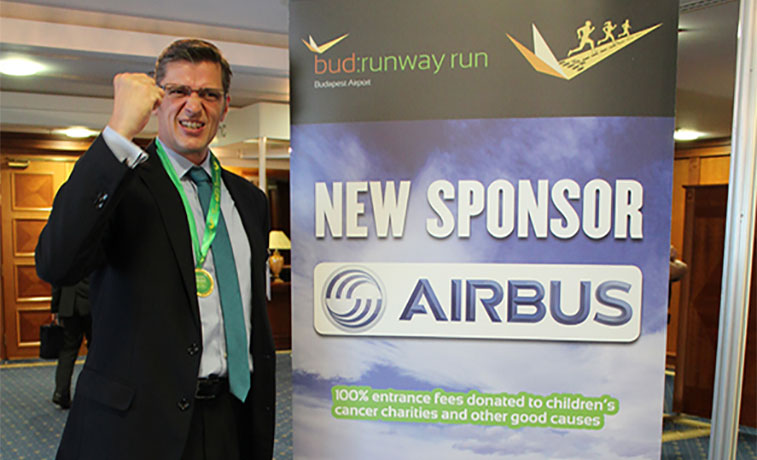 “I’m in” – Lasgin Saydo, Area Sales Manager, Boschung, is used to his equipment clearing Budapest Airport’s runway and he seems absolutely over-confident that he can lead Boschung to the prize for “Fastest Aviation Enterprises Team”. 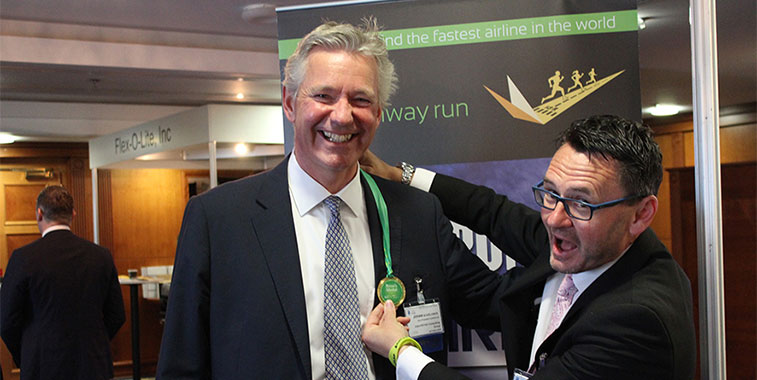 “I’m in” – Johan Schölvinck, Vice President Commercial, InterVISTAS Consulting Group. Schölvinck Vice-Chair of the ACI EUROPE Commercial Forum which has crucially decided to stage its meeting alongside the race so that all members can take part!!! 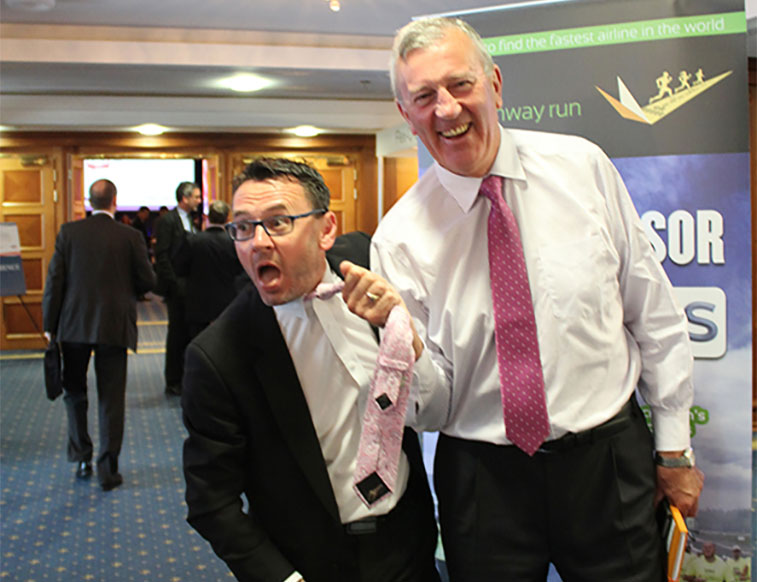 “Ireland’s in” – anna.aero Publisher Paul Hogan ‘hanging out’ with Michael Cawley, Chairman of Fáilte Ireland, the Irish national tourism development authority (and former Deputy CEO of Ryanair). Cawley, who is clearly not capable of walking up the stairs of a double decker bus without assistance, promises to boost outbound Irish tourism with yet more runners from his well-represented country. 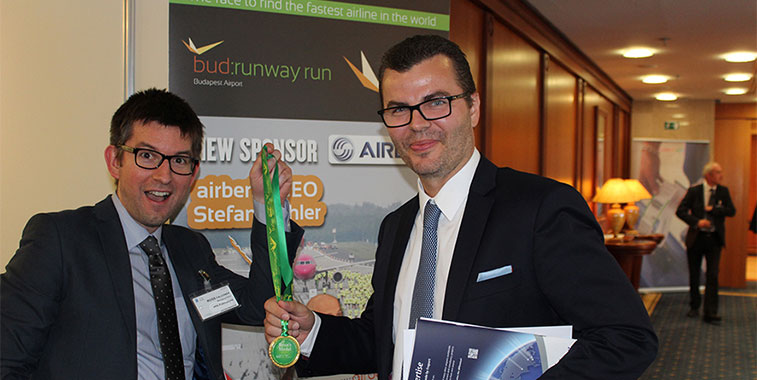 “I’m in” – anna.aero’s Ross Falconer looks like he needs to get in shape before attempting the Airbus-sponsored anna.aero-Budapest Airport Runway Run, but Vaclav Rehor, Chairman of the Board of Directors, Czech Aeroholding, operator of Prague Airport, a keen competitor with BUD, hopes to do well on track and win a ‘Bron’s Medal’. 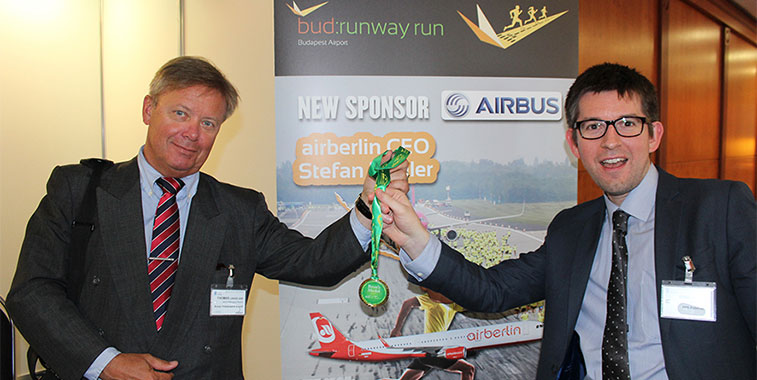 “We’re in” – Thomas Langeland, Managing Director, Kristiansand Airport, is confident he can lead an Avinor team to glory as ‘The Fastest Airport in the World’. 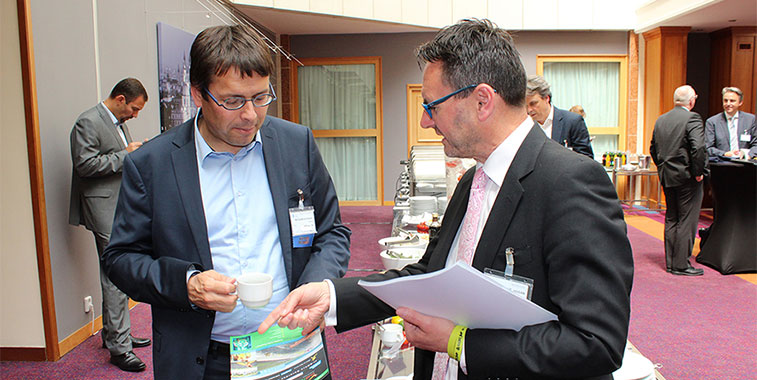 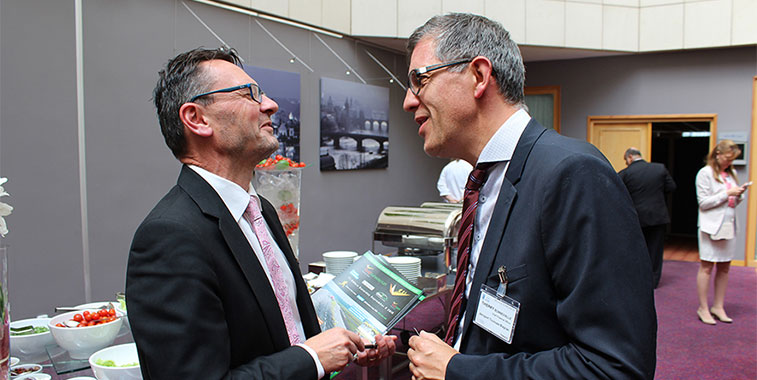 “I’m in” – Thierry Bonnevialle, Chief Financial Officer, Aéroport Toulouse Blagnac, weighs up the economics of sending a team to compete in the Airbus-sponsored anna.aero-Budapest Runway Run. 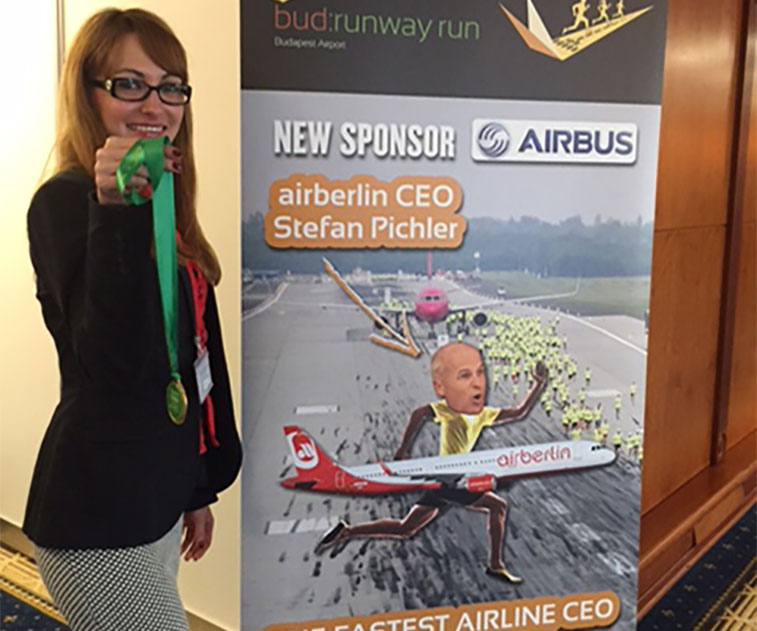 “I only race to win.” Uber-competitive Kateryna Hess says she’s going to be fastest woman. Well we wouldn’t argue with you Kateryna!