The Italian market has benefited significantly from new Chinese services in the last few months. Hainan Airlines launched a new direct service between Chongqing and Rome at the end of April, while Alitalia returned to China with the resumption of flights between Milan Malpensa and Shanghai at the beginning of May, to coincide with the opening of EXPO 2015 in Milan.

The growing demand for air travel from China to Europe is a topic that was keenly debated at the recent ACI Europe General Assembly in Prague. The potential benefits from high-spending Chinese tourists is one that many regions of Europe are hoping to take advantage of in the coming years. This week, anna.aero looks in more detail at developments in non-stop air services between China and Europe. Analysis of annual seat capacity shows that China is already by some distance the leading Asian country market from European airports with around 6.7 million one-way seats this year, up almost 11% on last year, and almost 70% larger than the Indian market. Significantly, the next five biggest markets are all growing at a much slower rate. 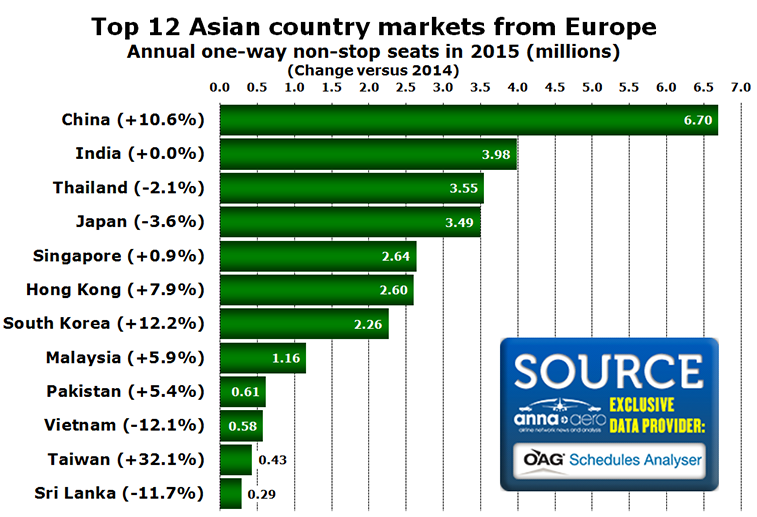 China-Europe market has doubled in 10 years

Looking at the China-Europe market since 2005, the data shows that annual seat capacity has more than doubled in the last 10 years, despite an 11% reduction in capacity in 2009 as a result of global economic difficulties. In three of the six years since 2009, capacity growth has been in excess of 10%. 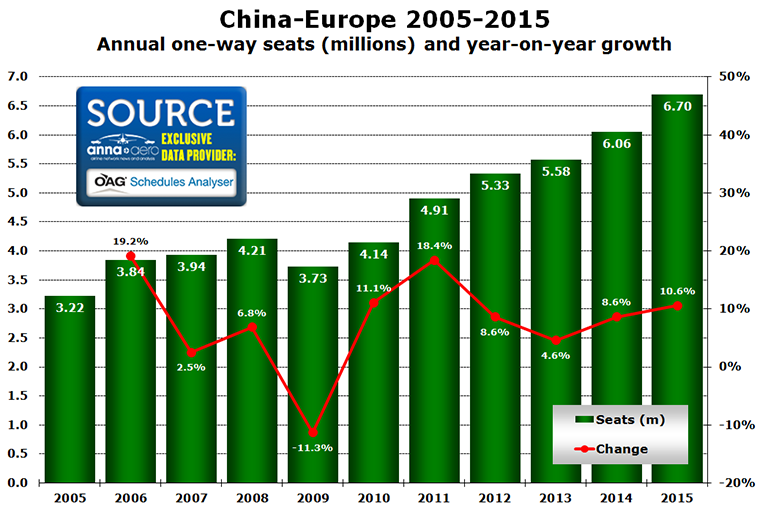 Analysis of OAG schedule data for this August shows that weekly seat capacity in the market is up around 11%. Air China offers twice as much capacity as any other carrier at present and is also one of the fastest-growing airlines in the market with 16% more seats this summer. Four Chinese carriers are ranked in the top eight airlines, with all four reporting above average growth this summer. The number of airlines in the market has grown from 18 last August to 22 this summer. The new carriers are Alitalia (which launched service between Milan Malpensa and Shanghai Pudong on 1 May), Sichuan Airlines (which links Chengdu and Moscow Sheremetyevo), Ukraine International Airlines (which connects Beijing and Kiev Boryspil) and Xiamen Airlines (which plans to start service to Amsterdam from Xiamen from the end of July). 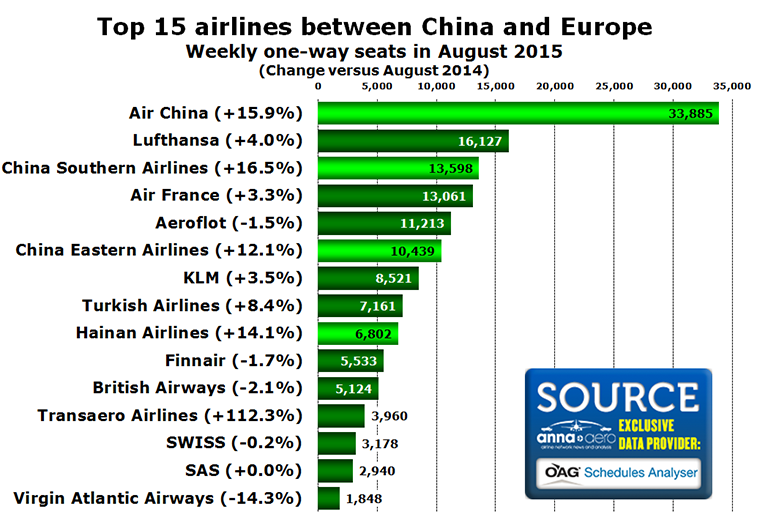 The number of Chinese airports with non-stop connections to Europe has increased from 13 last summer to 14 this summer. The new airport is Kunming which welcomed direct service to Paris CDG with China Eastern Airlines in December 2014. Almost 80% of all capacity between China and Europe departs from either Beijing (47%) or Shanghai Pudong (32%). The next busiest Chinese airport is Guangzhou with around 7% of capacity.

Of the nine Chinese airports with three or fewer routes to Europe three serve Frankfurt and Paris CDG, two each serve Amsterdam, Helsinki and Moscow, while one (Chongqing) serves Rome Fiumicino. Note that none of them serve London Heathrow, surely another example of why that airport feels so strongly that it should be granted permission to build another runway there. 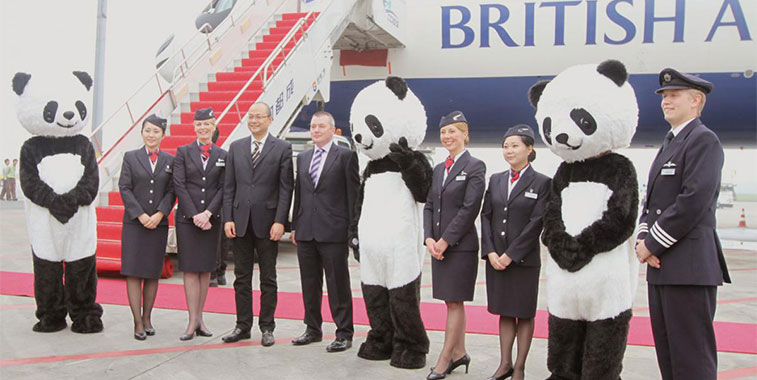 British Airways began flights from London Heathrow to Chengdu in September 2013, making it its third destination in China after Beijing and Shanghai. Europe’s busiest airport currently has non-stop flights to just four destinations in China, whereas its main hub rivals in Europe (Amsterdam, Frankfurt and Paris CDG) all have links to six each.