Celebrating the Cake of the Week award for the arrival of Wizz Air’s twice-weekly flights (Mondays and Fridays) from London Luton on 12 June is the fantastic team from Constanta Airport (perhaps better known as Mihail Kogalniceanu International Airport). Wizz Air is the third scheduled airline at the airport, joining Turkish Airlines’ four weekly departures (Tuesdays, Wednesdays, Fridays and Sundays) to Istanbul Atatürk and Blue Air’s twice-weekly flights (Wednesdays and Saturdays) to Milan/Bergamo. transavia.com France launched flights between Paris Orly and Dublin on 12 June. Flights on the airport pair will operate daily using the airline’s 737-800s. The airline’s CCO, Hervé Kozar, said: “It is a pleasure to welcome Irish people on board and offer them an attractive price with a high quality of service to Paris. We believe very strongly in the Dublin route and we want to stay and grow further in the coming months.” This is the carrier’s first scheduled service to the Irish capital. Dublin Airport MD, Vincent Harrison, added: “We are always delighted to welcome new airlines to Dublin Airport and I’m sure transavia.com France’s daily flight from Dublin to Paris Orly will prove very popular with both Irish and French consumers.” Flights will face indirect competition from Aer Lingus, who operate to Paris CDG, while Ryanair operate to Paris Beauvais, north of the French capital. 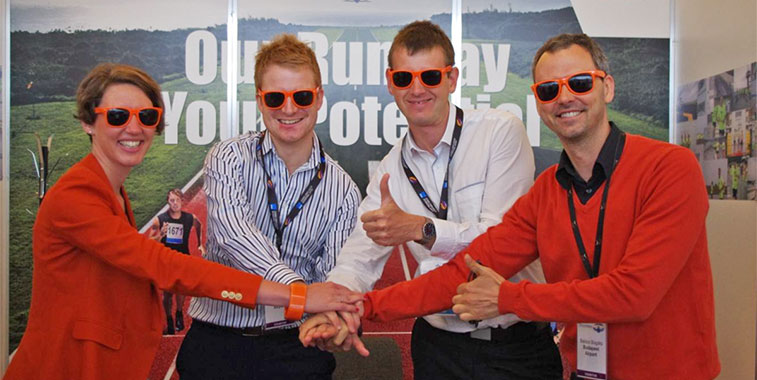 On 25 June, Wizz Air announced its eighth destination in the UK, this time to Birmingham. The ULCC will operate to Budapest and Warsaw from September, both operated twice-weekly using the airline’s A320s. Commenting on the announcement of the new routes, William Pearson, Aviation Director at Birmingham Airport, said: “We’re delighted to welcome Wizz Air to Birmingham Airport, and the start of flights to Warsaw and Budapest in September. Both cities, known for their rich history and distinctive architecture, will prove to be a big draw for passengers who are looking to book a short city break.” Wizz Air spokesman, Daniel de Carvalho, commented further by saying: “Birmingham will be Wizz Air’s eighth airport in the UK, and we hope our first two services to Hungary and Poland will stimulate tourism and hospitality sectors as well as strengthen business relations between the three countries of Hungary, Poland and the UK.” Pictured celebrating the launch of services at the 136th IATA Slot Conference in Vancouver are: Eszter Almasi, Airline Development Manager, Budapest Airport; Tom Screen, Head of Aviation Development, Birmingham Airport; Janos Pal, Senior Ancillary Revenue Manager, Wizz Air; and Balazs Bogats, Head of Airline Development at Budapest Airport. Read more about anna.aero’s coverage of the 136th IATA Slot Conference in our Show Daily magazine. 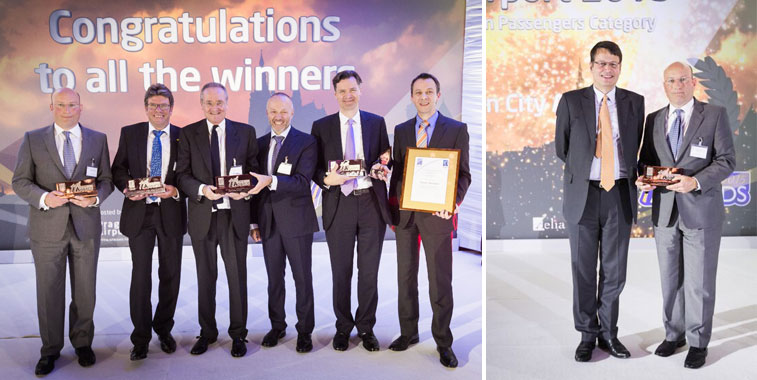 London City Airport was awarded the title of ‘Best Airport in Europe under five million passengers’ by ACI Europe at last week’s ACI Europe awards in Prague. This is the fourth year in a row that London City has won the award. The award is given in recognition of the airport’s investments in key areas to reduce passenger-waiting time, its ability to develop long-term strategic relationships with airline partners, and its commitment to environmental awareness. Presenting the award in Prague to London City Airport CCO, Matthew Hall, was Philippe Merlo, ATM Director at EUROCONTROL. Commenting on the achievement, London City Airport Chief Executive, Declan Collier, said: “We are delighted to have received this award for a fourth consecutive year. It is a fantastic achievement that recognises the enormous efforts that everyone at London City has put into maintaining and delivering our customer propositions of speed, location, and customer experience. We are especially pleased to see our environmental efforts recognised. We have worked extremely hard over the last year to improve our environmental impact, reducing passenger carbon emissions by 6% in 2014, and we are only one of five airports in the UK to have achieved Level Two ACI Carbon Accreditation status.” On 20 June, London Stansted Airport welcomed the arrival of China Southern Airlines Cargo. The carrier will operate a twice-weekly service from Guangzhou with 777-200 freighters. The service will be the only direct freighter link between the UK and China, and Stansted’s first scheduled cargo link to Guangzhou. Commenting on the launch, Andrew Harrison, London Stansted Airport’s MD, said: “We are delighted China Southern has selected Stansted as the base for its new dedicated freighter service to the UK. It clearly demonstrates the returning confidence in trade between the two countries and is great news for businesses across the UK, and in particular the eastern region looking to access the Chinese market. This is the culmination of several years of working with the airline and their partners to ensure we deliver this new service.” See how Stansted Airport’s FTWA compares to others from around the world. On 18 June, Belfast City Airport welcomed the arrival of Bombardier’s C Series CS300. As of 2015, the company has 243 firm orders for C Series single-aisle aircraft family, with the first one intended to be delivered to SWISS by the end of the year, with commercial operations planned for the middle of 2016. The aircraft was on a tour around Europe whilst attending this year’s Paris Air Show. 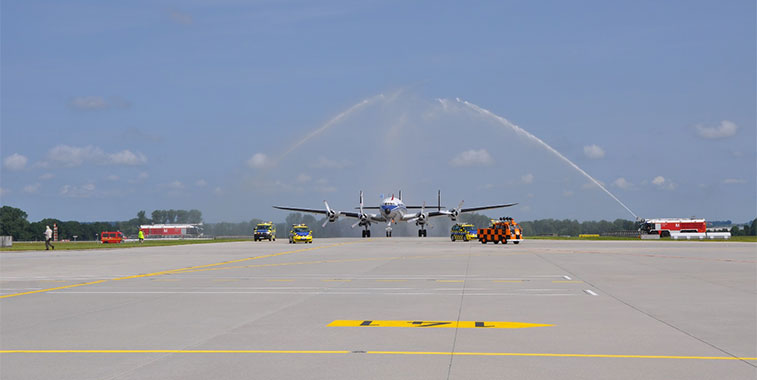 On 14 June, Munich Airport welcomed some aviation history in the form of a Super Constellation. The aircraft arrived to help the airport celebrate its inaugural ‘Airport day’, an event that drew in 20,000 visitors to experience the history of aviation. The Constellation, sporting a Lufthansa livery, was first used by the airline in 1955, and was the first aircraft type the carrier used on its transatlantic services. On 19 June, over 2000 night-runners took part in the Bank of Ireland Runway Night Run at Shannon Airport, raising funds for TLC4CF and Milford Care Centre. The five-kilometre course was tackled by the likes of the young and the old, including 86-year-old retired Shannon Airport executive, Bill Maloney. This is the second time the event has taken place, following on from the successful inaugural run last year. Airport CEO, Neil Pakey, said about the event: “Our biggest difficulty this year was telling people we could not accommodate them as the event was already fully booked in 36 hours. There was such a great buzz at the airport. It was also great to see that the event has not just national, but international appeal. We had 14 people arrive on a flight from London Heathrow who came in especially for the event.” The run winner was well known Limerick athlete, James Liddane, who completed the course in 15.57 minutes. The first lady home was Cushla Hehir from Ennis, who completed the five kilometre course in a personal best time of 17.58 minutes. If you fancy taking part in a runway run, don’t forget to sign up for the anna.aero bud:runwayrun taking place 5 September. Pictures by Brian Buckley and Don Moloney. On 21 June, more than 300 runners took part in Southampton Airport’s Summer Solstice Sprint, including a team from the airport’s largest airline, Flybe. The 5 kilometre run started at 6am, with runners raising money for Sophie’s Appeal – a local Southampton charity which provides support to children, their parents or carers, nursing and support staff who find themselves suddenly faced with the reality of childhood cancer. The run itself has raised over £3,500 so far, with more to come from sponsorship donations. Prizes were awarded for those that completed the course in the quickest time. The prizes for the fastest individuals went to Pete Sansome from Bishopstoke (Fastest Male), Karen Andrews from Hedge End (Fastest Female) and Sophie Jones from Chandlers Ford (Fastest Junior – aged 12 yrs). Kevin Montgomery, Airport Fire Service Station Manager and co-organiser of the event added: “It was an early start but what a fantastic way to welcome dawn on the longest day of the year, by running along our runway! We were delighted to see so many enthusiastic supporters turning out at 6am and really enjoying themselves for this charity event.” If you fancy taking part in a runway run, don’t forget to sign up for the anna.aero bud:runwayrun taking place 5 September. On 24 June, Belfast City Airport inaugurated the Grant Thornton Runway Run. Over 500 runners from businesses across Northern Ireland took part, with teams from various banks, law firms, charities, insurance companies, media, professional services and public sector organisations running the 5 kilometre course. Richard Gillan, Partner in Charge of Grant Thornton Northern Ireland said: “The atmosphere and great team spirit was evident in what was a resounding success for all involved. We realised that running down a runway at night would intrigue local firms but we were overwhelmed after the event sold out within a few short weeks.” The race was divided into three categories: Power NI won the male category, Hireco won the female category and Danske Bank lifted the mixed team title and also a life-saving defibrillator for their workplace, donated by HeartSine Technologies. Michelle Hatfield, HR and Community Responsibility Director at Belfast City Airport also commented by saying: “The airport is here to serve the local community and we’re delighted to play our part in hosting what was a wonderful night of camaraderie between local businesses. Funds raised tonight will go to the airport’s Community Fund which in turn will financially assist a youth sporting project in the greater Belfast area.” If you fancy taking part in a runway run, don’t forget to sign up for the anna.aero bud:runwayrun taking place 5 September.