Dubrovnik Airport on course to pass 1.6m passengers in 2015; UK still the biggest market despite Monarch Airlines shrinking by 57% On 26 May, airBaltic launched flights to Dubrovnik. Initially launched with a weekly service, the airport pair is now served twice-weekly, with the additional departure beginning on 18 June. In S15, airBaltic will be the 21st largest carrier at Dubrovnik, offering 274 seats per week to the Latvian capital.

Dubrovnik Airport is Croatia’s most southern airport, serving the south and coastal areas of the Dalmatia region. It has seen a rise in its tourism recently, helped especially with the city being the back drop to some of the scenes in the television series, Game of Thrones. The city is home to Croatia’s third largest airport, just behind Split and the capital, Zagreb. Looking at OAG Schedules Analyser data for the week commencing 10 August 2015, the airport will be connected to 50 destinations served by 32 airlines at its peak this summer. These destinations are spread across Europe, with the UK and Germany leading the way, as both countries each have 11 airports serving Dubrovnik. To see a further analysis of Croatia’s largest country markets, see anna.aero’s coverage of Croatia’s 2015 growth. 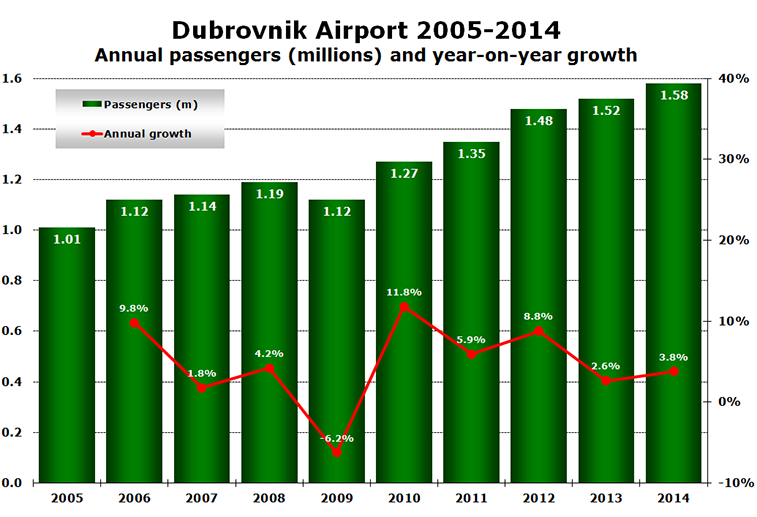 In 2014, Dubrovnik recorded its sixth consecutive year of growth, and in the past 10 years has seen only one year of declining passenger figures, which was in 2009. However the following year, the airport recorded its biggest yearly growth rate (in the last 10 years) of 11.8%, and ever since, passenger numbers have continued to rise steadily. So far in 2015, Dubrovnik has seen an average monthly increase of 3.9% per month, however the growth has been inconsistent, with February recording a decline of -4.9%, while March grew by an impressive 9.0%. With a capacity increase in seats for the week being analysed during S15 of 6.4%, anna.aero expects passenger numbers this year to reach record levels again, and potentially break the 1.6 million passenger barrier.

Entering Dubrovnik’s monthly passenger data for 2014 into anna.aero’s Seasonal Variation in Demand (SVID) calculator, the airport does not perform that well, generating a score of 88.7 ‒ a ‘Managerial and operational challenges’ rating. The airport ranks 39th out of the 41 airports analysed so far in 2015, lying between fellow ultra-seasonal airports of Ibiza and Menorca in Spain. The airport’s seasonality performance has declined marginally when compared to the result achieved in 2013, when it attained a score of 81.98, and also down from 2012, where it garnered a result of 79.86 ‒ which was still a ‘Managerial and operational challenges’ score. With this being said, 2014 was a still record breaking year in terms of passenger throughput, so although the SVID score has not improved, this may be something that the airport is prepared to face in order to increase traffic.

In order to gain a thorough understanding of Dubrovnik’s seasonality, anna.aero’s data elves also ran a comparison with two other airports in Croatia, Split (100.24 ‒ ‘Why bother opening in the off-peak?’) and Zagreb (6.46 – ‘Good’). From this, we can see that the two airports that lie on the Adriatic Coast (Dubrovnik and Split) show a strong pattern of seasonality, with the latter recording the highest SVID score by any airport so far this year. With both of these airports serving as strong transport hubs for incoming tourists wanting some summer sun, the SVID results are as expected. However, Zagreb is at the other end of the spectrum, having achieved a respectable score of 6.46 in comparison, due to its more year-round appeal as Croatia’s capital city.

32 airlines for S15, with only two serving this coming winter

While the schedules for the peak week in S15 show that 32 airlines will have operations at Dubrovnik, such is the ‘peakiness’ of the airport’s traffic, there will be just two carriers serving the airport in December 2015, unless of course a new carrier is announced or either British Airways and Croatia Airlines also decide to stop winter operations (highlighted in light green). These two carriers also form part of Dubrovnik’s top 12 airlines for the peak of this year’s summer season. 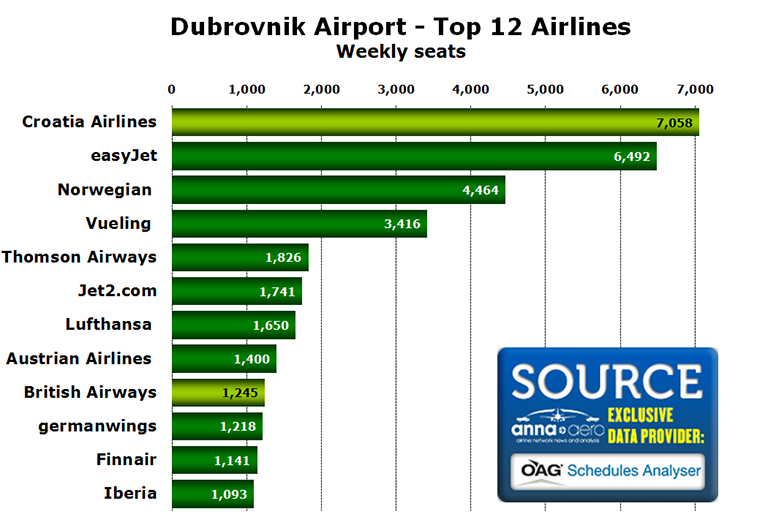 When comparing the August schedules for S15 to those experienced in the same week last year, the airport is anticipating a 6.4% increase in weekly seats. This year however sees the departure of Monarch Airlines and Aeroflot leaving the airport’s top 12 carriers ranking, with the former showing a 57% decrease in seats this summer, while the latter has now stopped operations altogether from Dubrovnik. As a result of this, we now see Thomson Airways and Finnair enter the airport’s top 12 airlines.

UK commands the show in terms of market demand

With 11 routes each, it’s understandable to see both the UK and Germany taking up the top two spots at Dubrovnik for country market demand. The former however has 44% more seats than the latter, meaning that frequency or aircraft density is greater on routes to the UK. The Croatian domestic market is significant, being placed in a respectable fourth spot. The only three destinations available for this coming winter are Zagreb, (Croatia Airlines), London Gatwick (British Airways) and Rome Fiumicino (Croatia Airlines). With 47 destinations being terminated at the end of S15, the extremely seasonality of Dubrovnik is obvious to see. 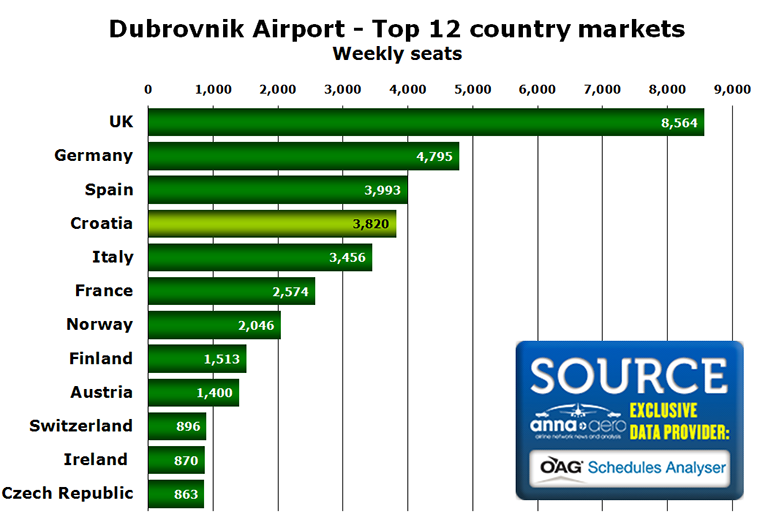 Gatwick, Zagreb, Barcelona, Rome Fiumicino and Helsinki make up the top five routes from Dubrovnik, with three of them also being the only destinations served this coming winter. What is surprising to note is that even though Germany has the second highest market demand, its first destination in the top 12, Frankfurt, only comes in at sixth place. Overall, the top 12 country markets make-up a substantial 89% of the overall seat capacity available this summer from Dubrovnik. A new addition to airport’s route portfolio this summer will be Milan Linate, with Alitalia scheduled to launch the route on 1 August with a twice-weekly frequency.