Leak of the Week – Emirates to fly to Philly 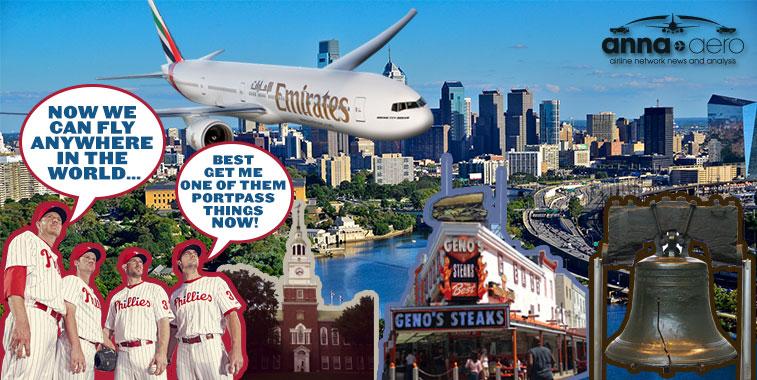 Emirates’ President Tim Clark confirmed that his airline was in talks with the airport and municipal leaders in Philadelphia to become the MEB3 airline’s 11th US destination. The Pennsylvanian city will become far better connected if they do, gaining access to the airline’s current 126 global destinations.

As the vitriolic words continue to pass between the USB3 (American Airlines, Delta Air Lines and United Airlines) and MEB3 (Emirates, Etihad Airways and Qatar Airways), the latter seem hell bent on launching plenty of new US routes, just to prove their point in the rhetoric still further, with Emirates’ boss suggesting that Philadelphia will be its 11th US destination. The leak occurred during a press briefing being held last week by Emirates’ President Tim Clark, who let it slip that the airline was in talks with airport and municipal leaders in Philadelphia to make the city its next US destination. Clark was speaking at National Press Club in Washington, where he unveiled a 400-page rebuttal of the allegations made by the USB3 that Emirates is unfairly subsidised by the Government of Dubai and used its financial positions to expand in the US at the expense of the three US carriers.

Five new US routes being planned

Almost to rub salt in the wounds, since the war of words between the two groups of airlines began earlier this year five new routes have been announced by the MEB3, now including Philadelphia. In late-March, Emirates announced that its 10th US destination would be Orlando, to be started on 1 September, flown daily by the airline’s 777-200LRs. Just over a month later, Qatar Airways made a statement that it would begin daily flights to Los Angeles on 1 January 2016 using its 777-200LRs, with a daily Boston route to follow on 16 March, this time to be operated by its A350-900s. Two weeks ago, the oneworld carrier continued the US new route onslaught, with Atlanta set to become its 10th US destination from 1 June 2016. Etihad Airways currently has no plans to add any further US destinations to the four daily flights that will come into operation over the next 12 months.

During his robust response to the USB3’s allegations, Clark also suggested that there was a queue of US airports lining up outside his office door, making their respective cases for Emirates to add their city to its network. Following on from his Philadelphia remark, Clark said: “They are not the only ones that want us fly to their city.” Indeed, in the airline’s weighty rebuttal tome, it was made evident which US airports had made approaches to the MEB3 carrier:

Airports already served by a MEB3 carrier (in brackets):

Airport not served by a MEB3 carrier: 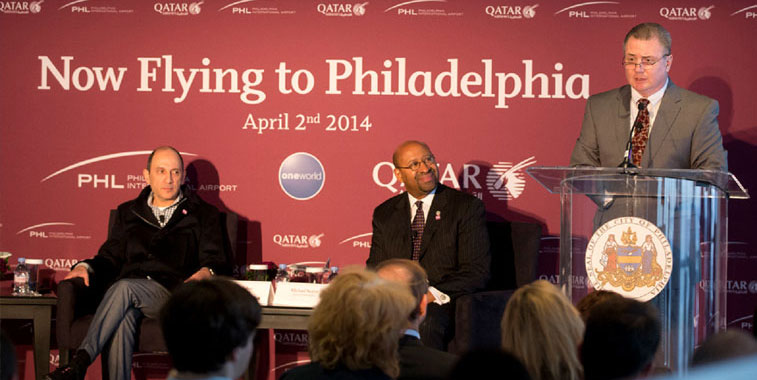 Emirates could well be the second MEB3 carrier at Philadelphia, following in the contrails of Qatar Airways, which started its own daily services to the US destination, its fifth at the time of launch, last year. The prospects of service to nearby Pittsburgh or New York Newark would appear to be further off if Emirates does commence operations from Philadelphia.

If and when Emirates does arrive in Philadelphia, its operations will join the daily services already offered by Qatar Airways, which launched its own flights on 2 April last year. The arrival of the Dubai-based carrier in the Pennsylvania city would be a bitter blow for nearby Pittsburgh (430 km/270 miles across the state), which we now know has courted Emirates, but is yet to attract any of the MEB3 carriers to its airport.

Although not mentioned in Clark’s rebuttal report, New York Newark, which is even closer to Philadelphia (at just 130 km/80 miles away) in neighbouring New Jersey, would also seemingly be off the MEB3 radar too, despite all three heavily serving New York JFK. The fact that Newark continues to be overlooked by the three airlines comes regardless of the fact that JFK is the #1 US destination (Chicago O’Hare and Washington Dulles both have the same amount of weekly seats as JFK for Qatar Airways) for all of the MEB3 carriers in terms of weekly seats (according to OAG Schedules Analyser week commencing 7 July). One thing is for certain, as the war of words rumbles on, the MEB3 will probably be pulling forward plans for further US growth rather than putting potential new routes on the backburner.

In order to determine the key markets that Emirates will be targeting from Philadelphia, our data elves have used OAG’s Traffic Analyser. The results are derived from looking at annual adjusted one-way booking figures for 2014 for traffic originating in the Pennsylvanian city but routing via intermediate points like London Heathrow, Frankfurt and Doha to get to its final destination within the current Emirates network of 126 global destinations. Only logical onward connections to cities in Africa, Middle East and Asia have been considered, as it deemed unlikely that Philadelphia passengers going to Budapest are going to choose to fly via Dubai. Indian destinations (highlighted in light green) would seemingly be the most likely traffic target for Emirates, securing five of the top dozen opportunities. 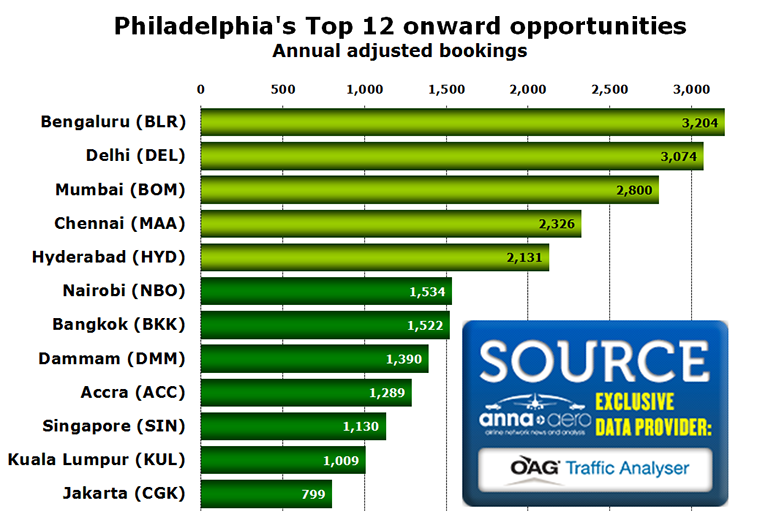