Mexico City Airport is not served by any MEB3 or Asian carriers; on course to pass 38m passengers in 2015 In May, Aeromexico launched its latest US service from Mexico City, this time to Boston. In S15, Mexico’s national carrier will operate to 75 destinations from the Mexican capital, 14 of them in the US. From December, the carrier will add destination #76 to its Mexico City route portfolio, Vancouver, the airline’s third Canadian destination after Toronto and Montreal.

With around 21 million people living in Mexico City, it ranks joint third on the list of the world’s most populated cities, alongside Mumbai and São Paulo according to the UN. These are numbers the Aztec empire could not have predicted back in the year 1325 when the city was founded. As a result, it’s no surprise to see that Mexico City Airport recorded 34 million passengers last year. 2014 was the year that witnessed the airport passing 11 million international passengers for the first time, while domestic passengers dominated the overall numbers, with over 22 million people flying on services to 51 airports across Mexico from the capital. Overall 101 destinations will be served this summer. 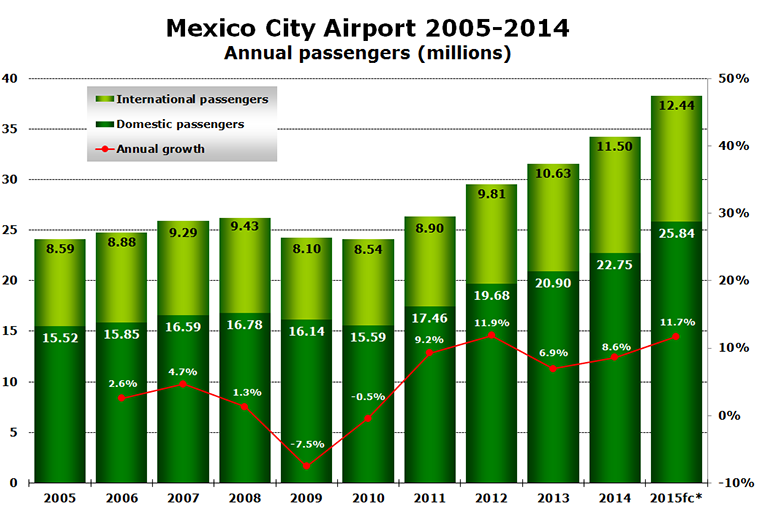 For the first five months of 2015, passenger numbers are up just over 10%, with year-on-year growth in every month. July is the airport’s busiest month, while February is the quietest (they’re not a fan of loved-up breaks away for Valentine’s Day in Mexico City it seems). Given the average monthly increases achieved so far this year, Mexico City can expect to pass 38 million passengers in 2015 if it continues at that growth rate. The domestic market is the most dominant at Mexico City, making up 66% of overall passenger numbers, and recording a growth of 8.9% in 2014. As a result of this, out of the 3,736 weekly flights from Mexico City this summer, 2,666 will be on domestic services. In 2014, international passengers grew by 7.6%. The airport’s seasonality profile gives it a SVID score of 0.91 (“Excellent”). In comparison, Mexico’s second and third busiest airports, Cancun and Guadalajara also scored fairly, with the former recording a score of 1.74 (“Excellent”) and the latter scoring 1.09 (“Excellent”). 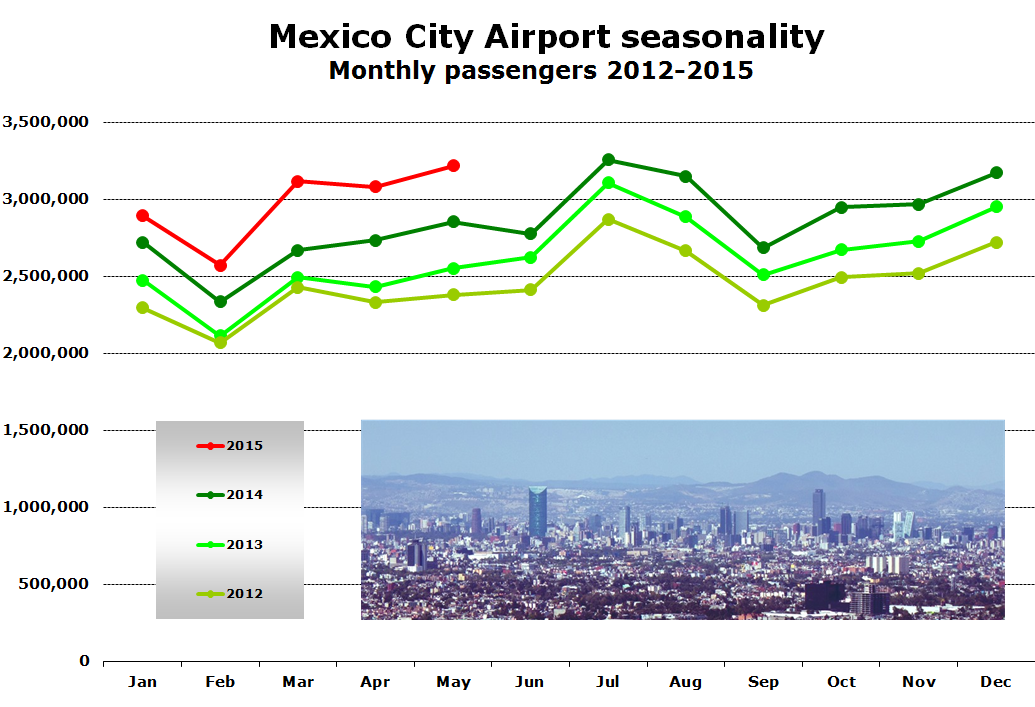 No MEB3 at Mexico City, no Asian carriers either

Aeromexico is the dominant carrier of the 22 that serve Mexico City according to OAG Schedules Analyser data, occupying 42% of weekly seats from the capital. The second biggest airline is Interjet, which occupies 21% of weekly seats, while third placed carrier Volaris takes up 14%. In total, Mexican carrier’s make up 85% of weekly seats on offer, of which 48% is from the LCC’s of Interjet, Volaris and VivaAerobus (Mexican carriers are highlighted in light green in the table below). United Airlines is the biggest international carrier at Mexico City, however it occupies just 2.6% of available seat capacity. United serves seven destinations from the airport, with Houston Intercontinental being the most popular route, as the Star Alliance member has scheduled 50 weekly flights this summer to the Texan city. 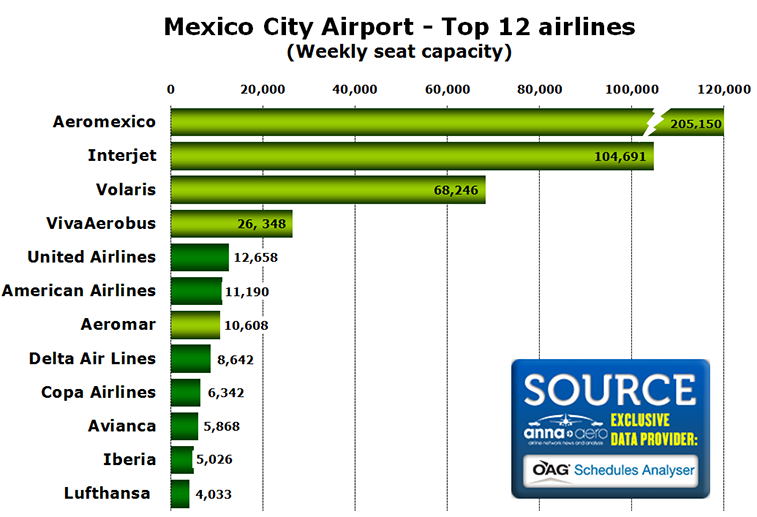 Mexico City is not served by any of the MEB3 carriers, a surprise as it is the only city in the world’s top 10 most populated not to be served by Emirates, Etihad Airways or Qatar Airways. With 11 million international passengers and the potential domestic connectivity market of 22 million, surely these numbers will be significant enough for one of the MEB3 to take the plunge at some point and open operations to Mexico City.

No Asian carriers are present at Mexico City Airport either. The only connections to the continent are flown by Aeromexico, which operates services to Shanghai Pudong and Tokyo Narita. Europe is well-covered, with Air France, British Airways, Iberia, KLM and Lufthansa all operating to the continent’s major hubs from the airport. Germany’s national carrier is the only European airline to serve Mexico City with two routes, Frankfurt and Munich. Madrid is the most popular destination, taking 34% of the European market’s weekly seat capacity.

This October, JetBlue Airways will become the latest US carrier to serve Mexico City, joining fellow carriers Alaska Airlines, American Airlines, Delta Air Lines, Southwest Airlines, United and US Airways, with the latter soon to be fully-merged with American. The New York-based LCC currently plans to launch services on 1 October, serving Fort Lauderdale and Orlando. In total, Mexico City is connected to 26 US airports, making it the biggest international market. The airport’s top 12 routes in terms of weekly seats this August are mainly dominated by the domestic market, with eight of the airports being in Mexico. Of the four international routes (highlighted in light green), three are in the US, while Bogota in Colombia pinches the final top 12 spot. 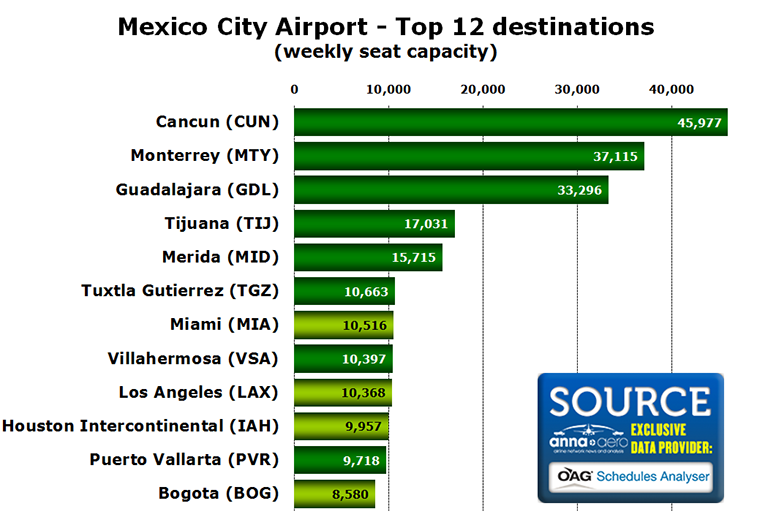