Jazeera Airways continues to fester; no new routes in the last 12 months or any planned 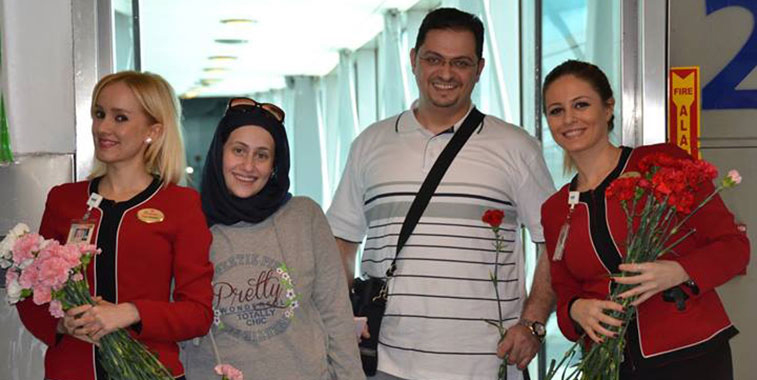 On 2 May last year, Jazeera Airways moved its thrice-weekly service from Istanbul Sabiha Gökçen to Istanbul Atatürk – the last ‘new’ route the Kuwait-based LCC started. Nothing has been launched since and no new routes are currently planned to start this year or next – is this the least-dynamic LCC in the world, or just an airline hampered in its growth by its geographical location?

Kuwait-based Jazeera Airways launched flights in October 2005, and now seems to be flat-lining despite having had its fair share of ups and downs. After growing rapidly and establishing bases at Kuwait International Airport and Dubai, the airline closed the latter in May 2009, just prior to the launch of flydubai in June 2009. Since then, it has reduced its fleet from a peak of 11 aircraft to a current fleet of just seven A320s ‒ the newest of which was delivered in May last year (according to planespotters.net). For the last five years, the airline’s ASKs have remained remarkably unchanged, varying between a peak of 2.13 billion (2012) and a low of 2.04 billion (2015). 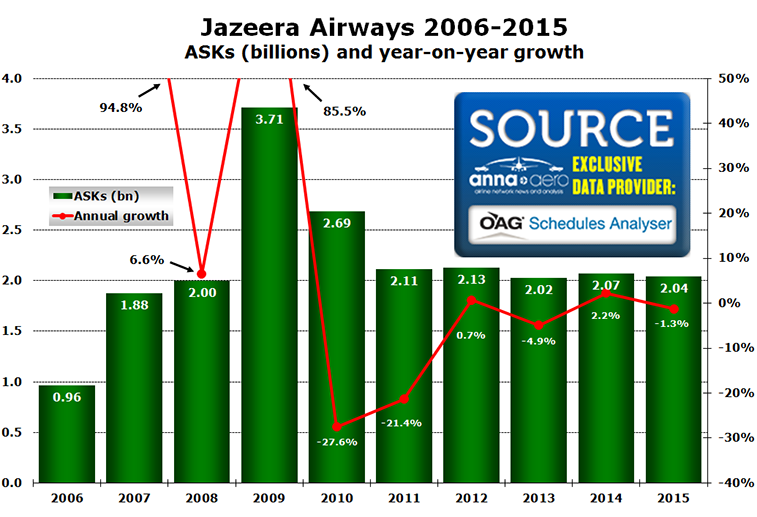 The LCC currently offers a network of 14 destinations from Kuwait City across the Middle East. This is just over half the amount of network points served at the airline’s peak of operation in 2009, when it flew to 27 destinations, including Delhi and Mumbai in India. Despite the hacking of the schedules since then, of those city pairs flown in 2009 many still remain a feature of Jazeera’s network – Alexandria, Amman, Bahrain, Beirut, Dubai, Jeddah, Luxor, Mashhad, Riyadh and Sharm el Sheikh.

Looking at the airline’s website it says that flights are available to 19 destinations in 11 countries. However, when you try and book flights to Syria – where it used to serve Aleppo, Damascus and Deir Ezzor ‒ you receive a message that says: “All flights suspended until further notice”. A similar thing happened when our data elves tried to book a flight to Najaf in Iraq and to Assuit in Egypt, however this time the message was: “Sorry, no flights available. Please select another date or station and try again.” Presumably these destinations will come back on-line if and when the situation in those countries eases.

Since anna.aero last looked at the operations of Jazeera in April 2012, the airline’s #1 destination of Dubai has been replaced by Cairo, a destination that did not even feature in the LCC’s network at its peak in 2009. The demise of Dubai (DXB) may well have been partially as a result of the airline launching twice-weekly operations to Dubai Al Maktoum (DWC) in October 2013, a weekly frequency that it still offers in July 2015. The secondary airport in Dubai, along with Istanbul Atatürk, which was switched to from Istanbul Sabiha Gökçen in May 2014, are the only two airport pairs available today which were not served in the April 2012 network. 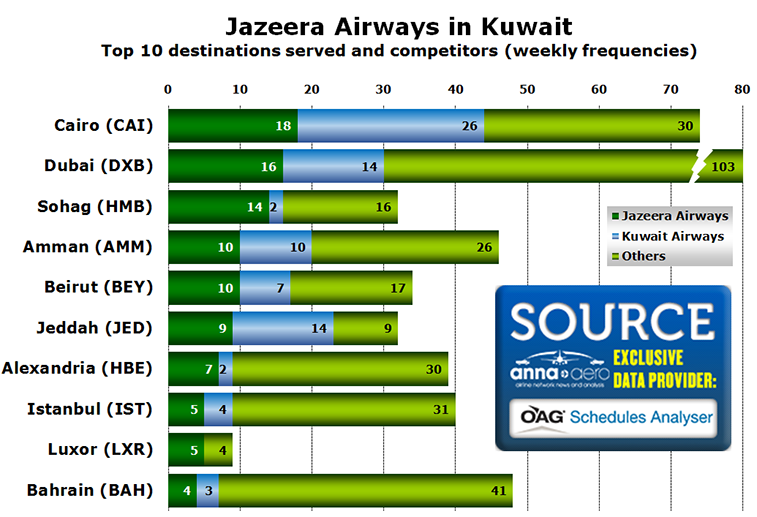 Naturally, Jazeera’s main source of competition is national carrier Kuwait Airways, which competes on nine out of the top 10 routes. The most competitive city pair that Jazeera flies on is Dubai, where Emirates offers 50 weekly frequencies (38%), flydubai operates 53 weekly rotations (40%), in addition to Kuwait Airways’ double-daily service (11%). However, when it comes to weekly seats being sold, Emirates has a clear superiority (52%), almost double of that flown by flydubai (28%), and around five times more than Kuwait Airways (11%) and Jazeera (7.8%).

Since anna.aero last reviewed Jazeera’s operations in 2012, the number of country markets offered by the LCC has reduced from 11 to the nine flown today (including Kuwait itself), with Syria and Iraq being currently suspended as previously mentioned. The airline’s geographical footprint has been greatly reduced in comparison to its peak operations in 2009, when it flew to 14 country markets, with Cyprus, India, Oman, Qatar and Yemen then on the network map (services to Iraq were not operated in 2009). 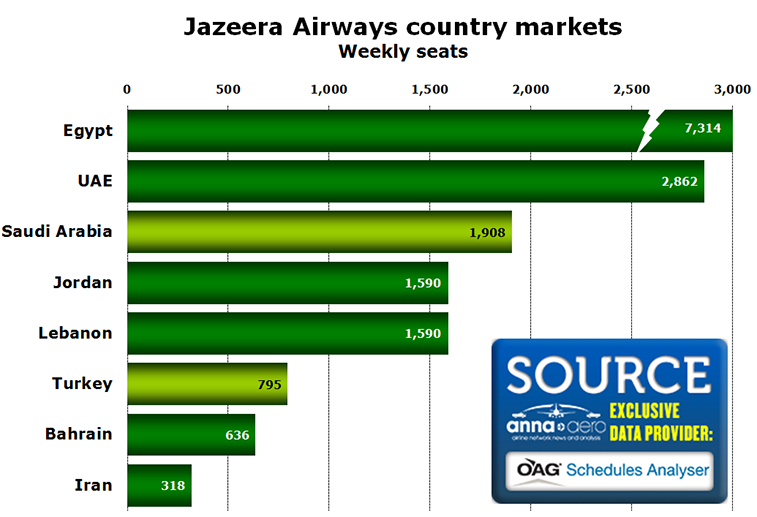 The country market which has witnessed the greatest reduction in weekly seats since 2012 is Bahrain, falling by 60%, and is followed by the UAE which has dropped by 36%. On the flip-side, Saudi Arabia has grown by 20% in that time, seeing it leapfrog both Lebanon and Jordan (both dropping by -9.1%) into third spot. However, the biggest growth has been reserved for Turkey, which has increased from 477 weekly seats in S12 to 795 in S15, a 67% rise. Clearly, the country markets of Turkey and Saudi Arabia (both have been highlighted in light green) are seen as safe bets for capacity growth in this troubled region. Hopefully market conditions in the Middle East will improve soon and Jazeera will emerge from its route development torpor.