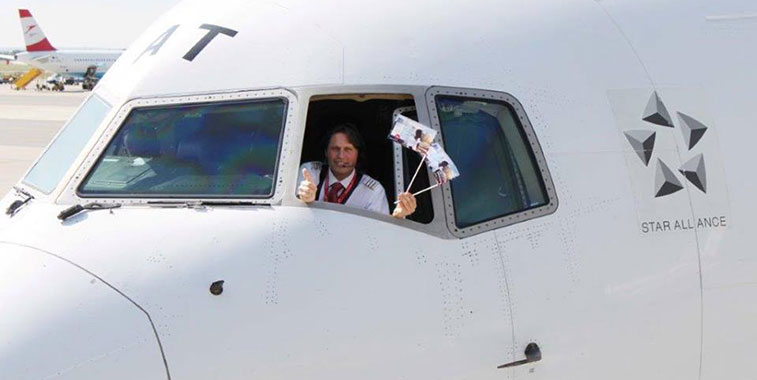 On 2 July 2014, Austrian Airlines launched its latest US destination from Vienna to New York Newark. This is the last route launch we could find in the anna.aero database, but the airline has plans to start flights to Mauritius and Manchester later this year, and to also re-start services to Colombo and Miami in time for the winter season.

When thinking about Vienna, the most popular things that come to people’s minds are the opera, the world famous Sachertorte cake at Hotel Sacher (cake is always on the mind for anna.aero’s data elves) and the city’s architectural wonders. For network planners, it’s a tad different, it’s all about Austrian Airlines. This summer, the Star Alliance member will operate to 116 destinations from Vienna, down three from the 119 served in S14. Routes to Bol in Croatia, Istanbul Atatürk and Kharkiv in Ukraine were those which were terminated by the airline. Looking at seat capacity, Austrian dominates Vienna by taking 51% of overall capacity, with second place NIKI occupying 13%, a carrier that serves 50 destinations. Since 2014, Austria’s national carrier has grown its capacity from Vienna by 4%, despite a reduction in destinations served. Austrian’s parent company Lufthansa is Vienna’s fifth largest airline, with the Lufthansa Group cumulatively occupying 55% of capacity. 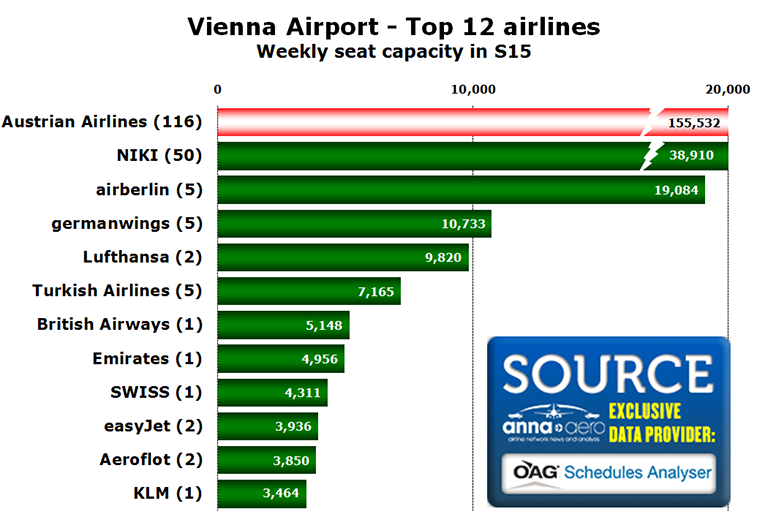 When looking back at the past 10 years of operation by Austrian at Vienna, it’s worth noting that 2009 and 2012 (highlighted in light green) showed dramatic drops in seat capacity. 2009, the year in which Austrian was purchased by the Lufthansa Group, showed a seat capacity reduction of 13% from 2008, while in 2012, the last year in which Austrian reported a loss in net profits, had a capacity reduction of 9% when compared to 2011. Despite these drops, 2015 is a record year in terms of weekly seats for Austrian at Vienna. 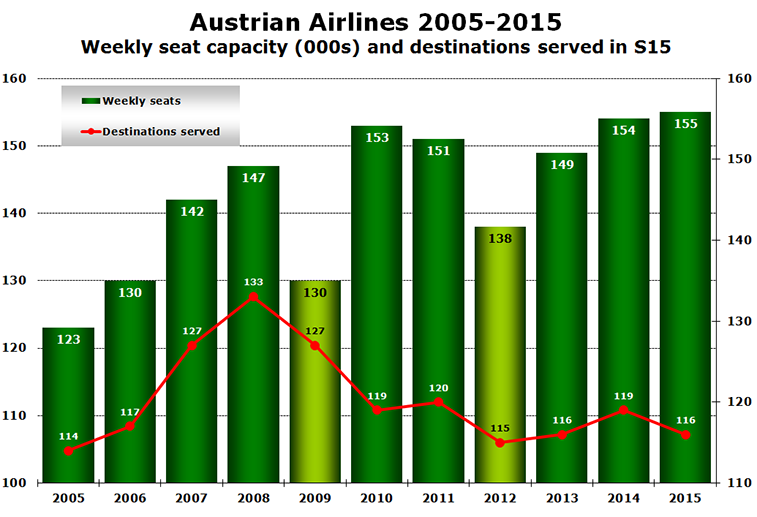 Frankfurt once again takes the top spot at Vienna, a position it has been in since 2009 when it replaced London Heathrow, which dropped to third in that year behind the German city and Copenhagen. Eight of the top 12 routes are to European capitals. Despite a reduction in the number of destinations served by the Star Alliance carrier, overall capacity for 2015 is at an all-time high, meaning extra frequencies and bigger aircraft on some of the airline’s more dominant routes, such as Berlin Tegel, a sector reporting a seat capacity growth of 22% when compared to last year. Some of the airline’s routes however buck this trend, such as Bucharest, an airport that is reporting a decrease of 21% in seat capacity this summer. The only other sector in airline’s top 12 routes reporting a capacity reduction is Copenhagen, down just 1%. Milan Malpensa and Stockholm Arlanda are new (highlighted in light green) to the top 12 for 2015, replacing Moscow Domodedovo, an airport that has seen a reduction in capacity of 26%, putting it joint 21st on the biggest routes out of Vienna for Austrian, alongside Düsseldorf. The second destination that has left the top 12 is Tel Aviv. 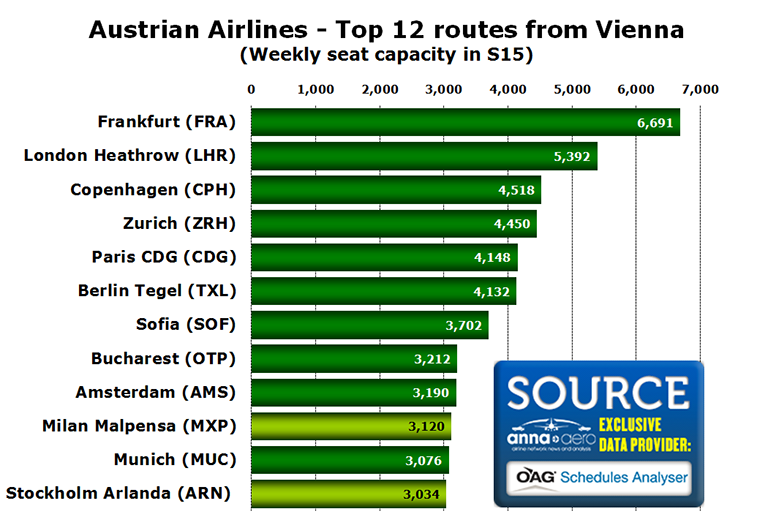 In time for W15/16, Austrian will re-start services from Vienna to Colombo and Miami. The airline’s return to Sri Lanka comes after services were stopped in 2007. Along with Miami, a route on which the airline is launching daily services on 16 October, the carrier also serves Chicago O’Hare, New York JFK, New York Newark (a route launched last year), and Washington Dulles in the US. From 29 October, the Star Alliance member plans to introduce a new weekly service to Mauritius, adding to its long-haul portfolio. OAG Schedules Analyser data shows that the 8,642-kilometre sector is to be operated by the carrier’s 767-300s.

Long-haul routes dominate the top 12 routes from Vienna in terms of ASKs, with the short-haul sector to London Heathrow (highlighted in light green) being the only route that features in the top 12 routes for seat capacity as well. Larnaca is new to the airline’s top 12 ASK routes, replacing Dubai, a destination that falls just short of this year’s top 12, taking spot #13 with 4.56 million ASKs. Tokyo Narita, the number one route for ASKs comes joint 22nd for the most popular routes in terms of seat capacity with 2,156 weekly seats being offered by Austrian. Fellow routes tied for the 22nd position are Bangkok Suvarnabhumi, New York JFK, and Washington Dulles. 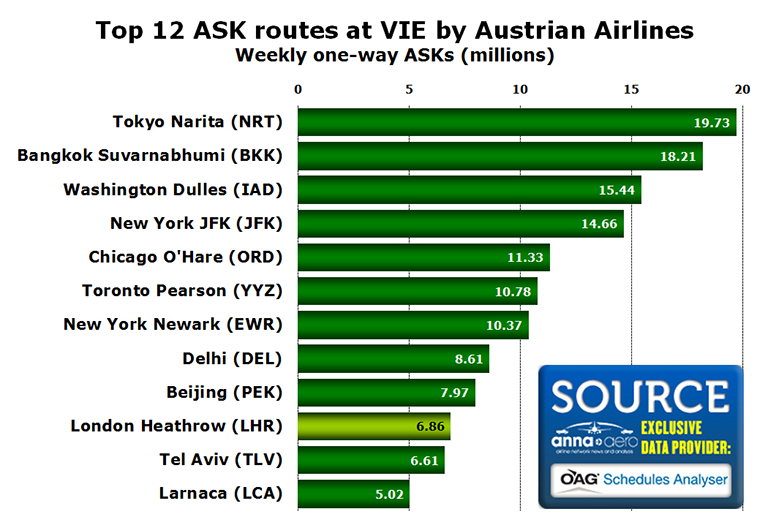 At the start of July, easyJet announced plans that it would add five routes from Vienna for the start of the W15/16 season, adding to its current London Gatwick and Rome Fiumicino services. Amsterdam, Berlin Schönefeld and Manchester will launch at the start of W15/16, competing directly with Austrian. A fourth route to London Luton will complement current London Gatwick services, both of which will compete indirectly with Austrian’s London Heathrow operation. Berlin Schönefeld will compete with Austrian’s services to Berlin Tegel, while the fifth new route to Bristol is not served by Austrian from Vienna. With easyJet’s current planned operations, Austrian will maintain its lead in market share on the competing routes against its orange LCC rival. It will have 83% more seat capacity on services to Amsterdam, 84% more capacity on the city pair to Berlin, and 38% more on the sector to Manchester. Services to London Heathrow will have 43% more weekly seats than the combined easyJet operation to the fellow London airports of Luton and Gatwick. easyJet Switzerland also serves the Austrian capital from Geneva. Austrian Airlines will compete with them on the sector, and has an advantage of 66% more seat capacity compared to the LCC.