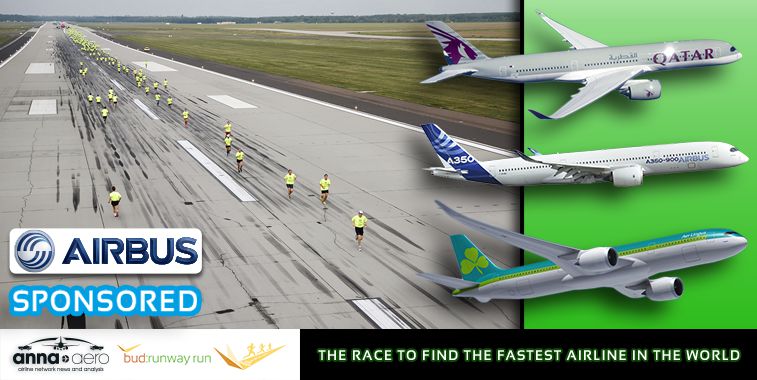 The Airbus-sponsored anna.aero-Budapest Airport Runway Run has a great showing of airline customers for its new-generation A350-900, the first Airbus made primarily carbon fiber-reinforced polymer. Combining stunning fuel efficiency with an operating range of 7,590 nautical miles, the A350-900 is tailored to meet airlines’ future market requirements in medium-to-long haul operations. The equivalent of three A350-900s will be needed to transport all 1,000 runners to the start line on the threshold of Budapest Airport’s runway 13R-31L.

We are going to need the equivalent of three A350-900s to fly in all 1,000 runners targeted for the Airbus-sponsored anna.aero-Budapest Airport Runway Run if the flurry of entrants continues with bookings up over 300% on this time last year, when a total of 609 competitors took part in the air transport industry’s signature charity race.

The Airbus-sponsored anna.aero-Budapest Airport Runway Run takes place on the airport’s runway 13R-31L at 1100 on Saturday 5 September 2015. There are two race distances – 10km (four runway lengths) and 5km. Runners can take part on an individual basis, or form teams of three or more. Last year’s winner of “The Fastest Airline in the World,” Aer Lingus, will compete with four teams and a total of 12 runners, once again led by its CEO, Stephen Kavanagh. Other recent team entrants include Airbus A350-900 launch customer, Qatar Airways, and another 12-strong team from SWISS, and the first-ever entry from Ethiopian Airlines.

100% of entry fees donated to charities

All entry fees are donated good causes and child cancer charities – every finisher receives “The Bron’s Medal” named for Brontë “Bron” Hogan, the anna.aero publisher’s 12-year-old daughter, who passed away in 2011 after a five-year battle with leukaemia.