Looking at this guy you can only imagine what the route launch ceremonies would be like at Port Moresby Jacksons International Airport, Papua New Guinea’s busiest and capital city airport. The country’s top 12 airports currently control over 90% of weekly seats in the south-western Pacific nation.

Papua New Guinea (PNG), in the south-western Pacific, encompasses the eastern half of New Guinea and its offshore islands. A country of immense cultural (with a total population of around seven million, nearly 850 languages are listed for the country) and biological diversity, it’s known for its beaches, coral reefs and scuba diving. Currently there are 25 airports with commercial services in the country (according to OAG Schedules Analyser w/c 14 July), which is one of the world’s fastest growing economies, with the capital city Port Moresby being the most significant, commanding 42% of weekly seats ‒ down from 43% in the same week last year. 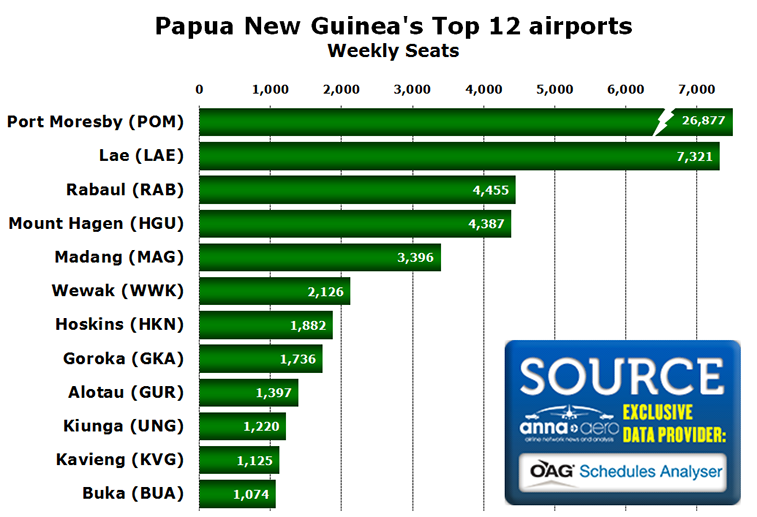 In the last 12 months the number of weekly seats across all of the operational airports has increased marginally by just 1%. The top 12 airports in PNG control 90% of the total seats available, a figure that remains unchanged since July 2014. The first six airports in 2015 were the same as those recorded in 2014, however further down the top 12, Buka and Kiunga have deposed Manus Island and Popondetta from the country’s biggest airports listing.

Air Niugini, is the national airline of PNG, and is headquartered at Jacksons International Airport at Port Moresby, and as expected, it is the main capacity provider to the country, with 64% of weekly seats. Air Tahiti Nui is a recent new entrant into the PNG market, launching A340-300 flights from Papeete on 30 June. However, Australian regional airline Hinterland Aviation’s weekly flight on the 1,286-kilometre sector from Cairns to Kiunga in PNG has been suspended over the last year.

While the lion’s share of routes operated in PNG are domestic (94% of weekly flights), the country does have a handful of international connections, with the most important being to Australia (46 weekly flights). On a much smaller scale, there are also services from Singapore (five weekly), Philippines (four), Solomon Islands (four) and Hong Kong (three) – all operated by Air Niugini ‒ as well as Japan, French Polynesia and Indonesia (all weekly). 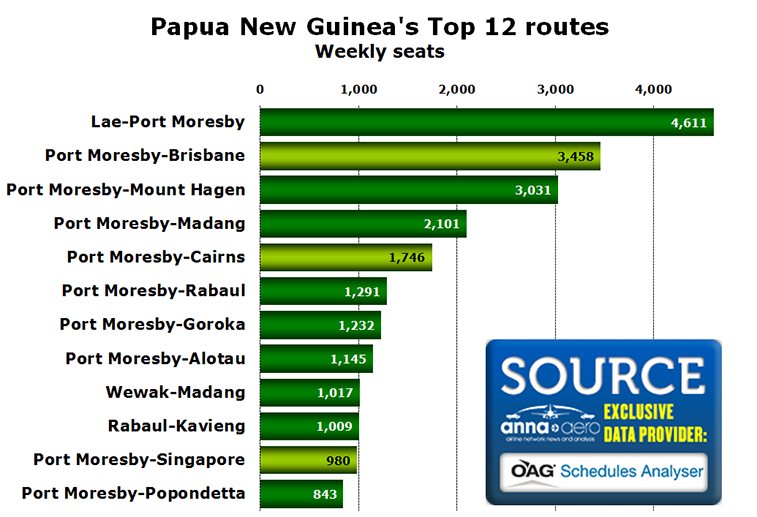 Of the top 12 routes, three are international sectors (highlighted in light green), with the remainder all being domestic airport pairs. All three of these international segments have shown year-on-year growth, with Port Moresby to Cairns leading the way (+15%) from the capital city’s links to Singapore (+8.2%) and Brisbane (+4.5%). The 296-kilometre domestic sector between Wewak and Madang heads the annual growth charts however, posting a 126% increase in weekly seats since last July. Capacity from Port Moresby to Popondetta has witnessed the most significant reduction, falling by 11% this July when compared to the same week last year.