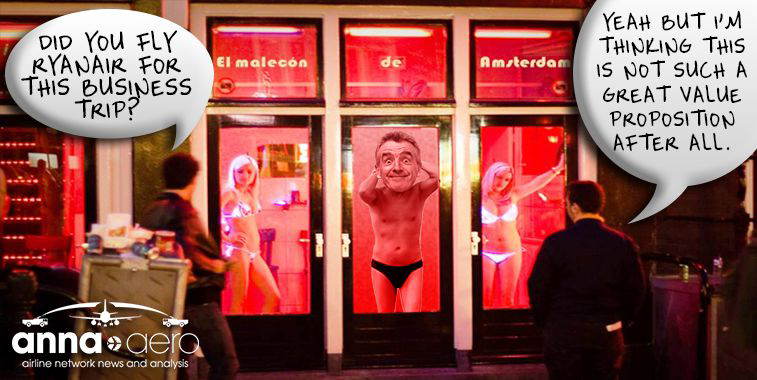 With its nine new slot pairs at Amsterdam anna.aero predicts Ryanair’s new Schiphol base will focus on frequent daily services to other big cities which are also Ryanair bases: London Stansted, Paris Beauvais, Barcelona and Frankfurt Hahn achieving 10-15% market shares on these heavily competed routes. We do not think Ryanair will serve Rome until it can get more slots and thereby compete on frequency.

Well it seems increasingly likely that Ryanair is going to be launching an Amsterdam base this winter. The Irish ULCC has been offered a batch of slots at Schiphol – nine daily pairs in fact ‒ as the airline continues its move towards using more primary airports in its revised strategy of trying to attract higher average yields. Confirmed by Stichting Airport Coordination Netherlands (SACN), which handles slot allocation at the country’s airports, the slots are available from W15/16. Ryanair has until 31 August to confirm whether it will take them up or return them to SACN. The airline had previously applied for slots at Amsterdam for the S14 season, but did not take up its allotted batch, apparently due to a shortage of available aircraft.

However for regular readers of anna.aero this is not news, as back on 8 October last year, after our wise data elves did some of their best beard-scratching yet, they told you exactly where they thought Ryanair’s next three ‘primary’ airport bases would be. Our top three options were Amsterdam, London Gatwick and Paris Orly (with Copenhagen in fourth – which subsequently was announced as a base 21 days later on 29 October). So hats off to our data elves, extra rations for them this week. 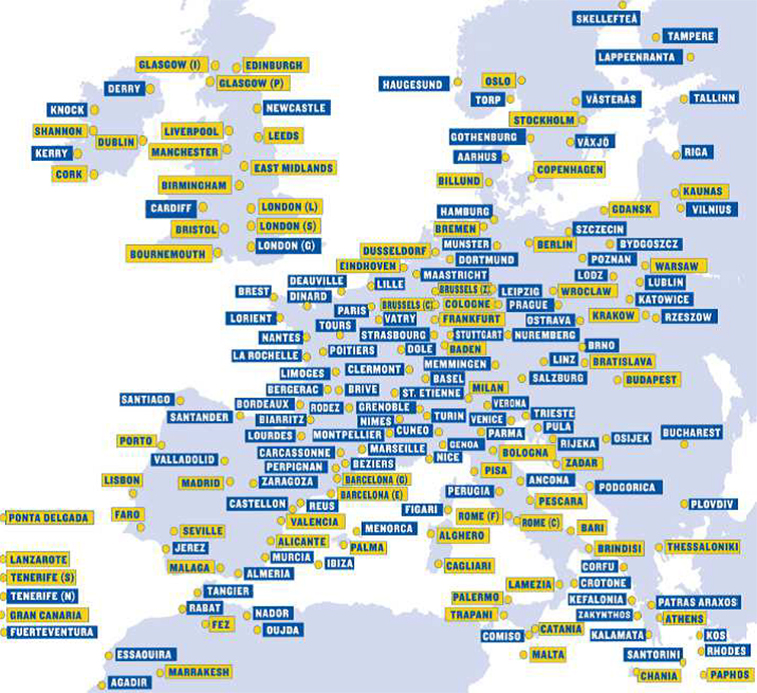 Ryanair currently has 73 bases, because the airline has failed to update this map (taken from its FY14/15 presentation), or indeed the one on its website (as of 13 July), with base #74 – Gothenburg (although Copenhagen has been downgraded from a base to an outstation on its website as a result of the current labour issues). With the opening of a potential base #75 at Amsterdam this winter, the ULCC will be trying to link-up the Dutch capital with other primary business centres on its network like London, Paris and Barcelona.

Where will ‘New Ryanair’ fly from Schiphol?

To determine these potential ‘primary’ airport bases, our data elves did some scientific number-crunching in order to establish the most likely opportunities for the airline. We concentrated on identifying the high-volume, high-yielding markets now increasingly important to ‘New Ryanair’, rather than the leisure and VFR-orientated and regional destinations the ultra-low cost carrier used to be famous for. It now only seems right and proper that we try and establish on which routes the Irish ULCC will look to enter from the Amsterdam market ‒ as our data elves did last year with easyJet – first announcing that it would become a base, and then telling you where the LCC would fly.

There are several limiting factors for the ULCC (and our data elves) to consider when deciding which cities to serve. The first being the fact that just nine daily pairs of slots are being made available to Ryanair. This will restrict the level of frequency and number of new routes that the ULCC will be able to offer. Secondly, the timings of the slots may also not be favourable for a ‘business’ schedule – for example the slots may be at quieter times of the day outside the peak travel hours of 0600-0900 and 1600-1900 which allow business travellers a convenient day return option, but also maximising work time at either end of the route.

For the purpose of this analysis it has been assumed that the airline has been given access to a workable profile of slots allowing for day-return business traveller traffic. Again, given Europe’s biggest airline’s latest penchant for targeting high-frequency, high-volume, high-yielding markets, our data elves have concentrated their search for new route gold there, rather than on the twice-weekly services to secondary, tertiary and downright in the middle of nowhere airport opportunities that the airline used to be renowned for. 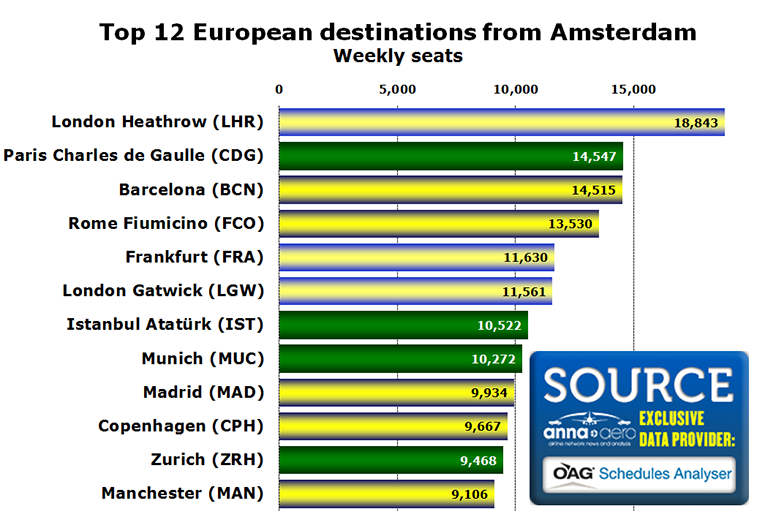 Looking at the top 12 European routes by one-way weekly seats on offer from Amsterdam this summer, eight of the destinations already have an existing Ryanair base, either at the exact airport in question, for example Barcelona (and are highlighted in Ryanair colours of dark blue and yellow) or in the same city, for example London Heathrow is not a Ryanair base, but London Stansted is (these airports are highlighted in a lighter blue and lighter yellow). The remaining four airports – Paris CDG, Istanbul Atatürk, Munich and Zurich ‒ are not currently a home for a Ryanair base, either directly or at a secondary airport serving the same city.  The last three airports of these four have therefore been ruled out of this evaluation, with Paris only remaining within the analysis due to airline’s existing Paris Beauvais network (despite being the airline’s ninth biggest operation by weekly seats, it is not a base).

Given the scale of the Amsterdam-London opportunity, it would seem impossible for Ryanair to ignore grabbing a piece of this market, which in 2014 totalled over 3.6m annual passengers (according to UK CAA figures). When all six served London airport’s (Heathrow, Gatwick, Luton, Stansted, City and Southend) weekly seats are combined, the capacity available rockets up to over 46,000 from the 19,000 provided by British Airways and KLM just at Heathrow. 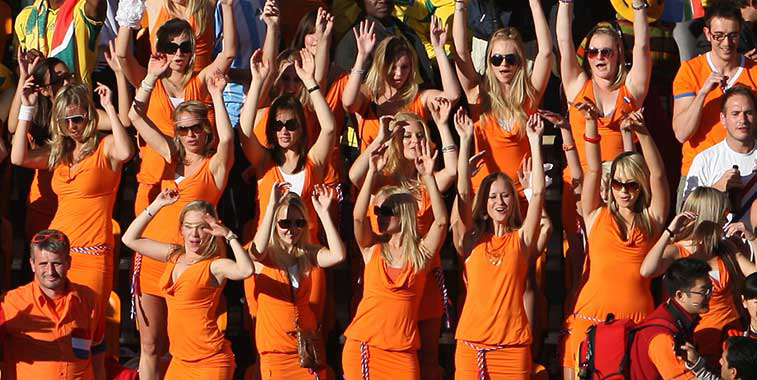 Last summer our data elves ‘leaked’ to you when easyJet was about to launch its base at Amsterdam Airport Schiphol and where it was going to fly a few weeks later – making this lot very happy. Last October we also told you that Ryanair would select the Dutch hub as a ‘primary’ base, so now it’s time to tell you where it is going to fly. With a London service seemingly likely, you’re probably not singing any more if you are part of the Luton-based orange brigade, which has flights to four London airports from Amsterdam.

With London a dead cert for Ryanair, and presumably being flown from Amsterdam into its London Stansted base, the next thing to determine is the level of frequency, especially given the finite number of slots available at the Dutch end of the airport pair, as well as the other new routes. To calculate an appropriate entry level of frequency in a market, a 10% rule of thumb has been used ‒ i.e. Ryanair would seek to achieve at least a 10% penetration in terms of one-way weekly seats available across all other airlines flying into all other airports in the destination city. On that basis, the following new routes and frequencies are deemed the most likely:

With just a single daily operation left to place from the potential nine available, the city pair from Amsterdam to Rome only achieved a market penetration of 8.9%, and as a result is not considered as an option for Ryanair at this stage with the remaining frequencies it has available. Should the airline gain further slots at Amsterdam, it is very likely that this route will then be activated. So the last daily slot pair will be used by the #5 airport from the top 12 destination listing:

So there we have our top four picks – London Stansted, Paris Beauvais, Barcelona and Frankfurt Hahn – based on the above selection criteria. With London covered (ruling out a Gatwick service), the remaining three remaining ‘primary’ airports in the top 12 – Madrid, Copenhagen and Manchester ‒ should however not rule themselves out of the running as Ryanair may well consider the ‘secondary’ status of Paris Beauvais and Frankfurt Hahn not ‘worthy’ under the ULCC’s revised strategy and opt to serve these ‘main’ city airports instead.

King KLM about to face its toughest test yet?

With nearly 24,000 weekly seats spread across the four potential Ryanair destinations, unsurprisingly KLM has the most capacity at risk from the ULCC’s entry into its Amsterdam hub this winter. However, it is precisely that, the SkyTeam carrier’s hub, which will probably shelter the airline’s operations from Ryanair’s likely capacity onslaught, as it has huge volumes of transfer and transit traffic to draw upon. With services into four London airports at the moment, easyJet will also not be sleeping easily about the arrival of its nemesis on its patch. Whether the two competitors will go toe-to-toe or tip-toe around each other will be an interesting fight well-worth watching.