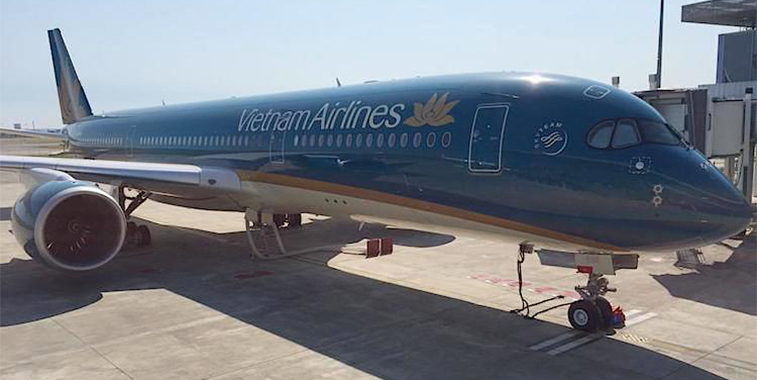 Vietnam Airlines now becomes the second carrier in the world to operate the Airbus A350-900 after Qatar Airways, which received another of the variant in June. VN-A886, seen here in Toulouse during its delivery ceremony, is the first A350-900 for the SkyTeam member.

Following 107 airframes being handed over in May, Airbus and Boeing stepped up their deliveries in June to a grand total of 128. Besides this fact, the American manufacturer maintains the lead over its European rival in terms of aircraft delivered in June, by delivering six extra units. With this, Boeing strengthened its lead in the 2015 delivery race to 73 units, up from 67 in May.

Having delivered more than 100 aircraft for the fifth month in 2015, the two manufacturers have once again recorded an impressive total. The combined deliveries of both producers for the sixth month of the year was 128, of which 67 came from Boeing and 61 from its European counterpart. Notably, while the American manufacturer has increased its unit lead, the company has decreased in terms of aircraft deliveries when compared to the same month last year (71). Airbus however also delivered six less units compared to June 2014. Overall 67% of deliveries in June were narrow-body aircraft, which is the same percentage as that recorded in May. 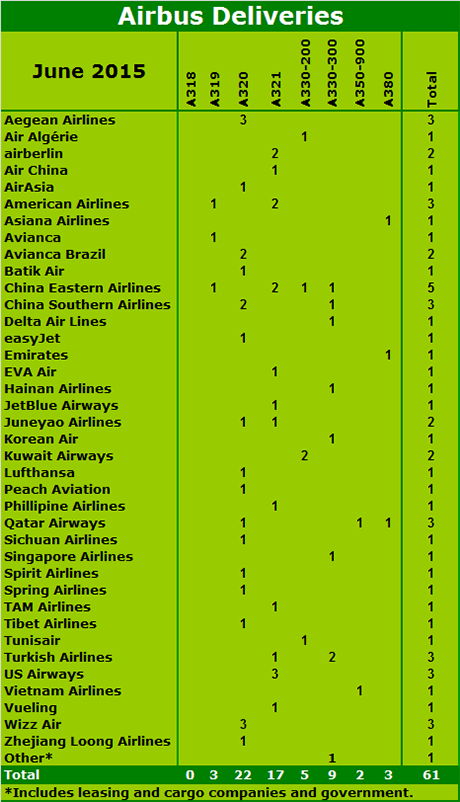 Airbus ended June with a total of 61 units being delivered to airlines, which is 14 more airframes than the amount delivered in May, and six more than in the corresponding month of last year. Over the period of January to June in 2015, the European producer delivered 304 units, representing a decrease of just one unit on the same period in 2014.

Once again, single-aisle deliveries in June were led by the A320 (22 units, down three from May), with a total of 42 single-aisle aircraft being provided to carriers around the world (up five from last month). Aegean Airlines and Wizz Air were the top two recipients of the A320 in June, each picking up three of the type. Other airlines to receive the aircraft were AirAsia, Avianca Brazil (two), Batik Air, China Southern Airlines (two), easyJet, Juneyao Airlines, Lufthansa, Peach Aviation, Qatar Airways, Sichuan Airlines, Spirit Airlines, Spring Airlines, Tibet Airlines and Zhejiang Loong Airlines. In the single-aisle deliveries, it’s also worth noting that Vueling took delivery of its first A321 in June.

Looking at wide-body deliveries, Airbus handed over 19 airframes in June, accounting for nine more units than last month. Following on from the delivery of three A380s in May, and three in April, the European producer handed over the exact same amount of the type in June, one to the largest operator of the A380 — Emirates, and one each to Asiana Airlines and Qatar Airways. Vietnam Airlines welcomed its first A350-900 on 30 June. The third and fourth carriers of the A350, Finnair and TAM Airlines, are expected to receive the aircraft type by the end of 2015. Qatar Airways also received an A350-900 in June, meaning the MEB3 carrier now has four of the aircraft type in its fleet. 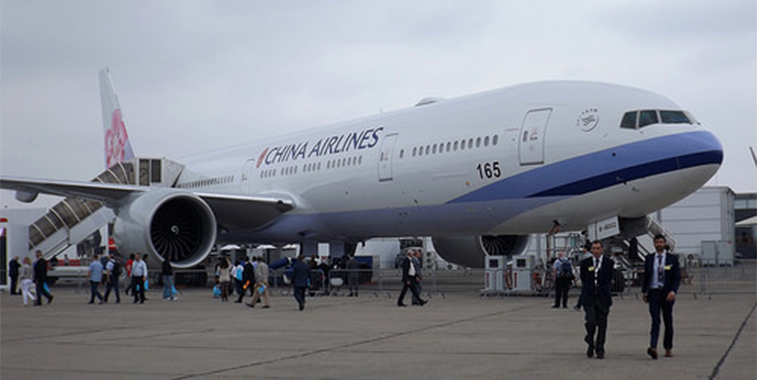 China Airlines’ latest 777-300, the fifth of 10 that the airline has on order, was showcased at the Paris Air Show in June. Commenting at the air show, Huang-Hsiang Sun, China Airlines Chairman, said: “China Airlines is proud to introduce our newest 777-300 to the global audience at the Paris Air Show. We are confident that our 777-300 will not only help showcase Taiwanese history, culture and taste, but also leave a lasting impression on the beauty of Taiwan to aviation enthusiasts who attend the show.” 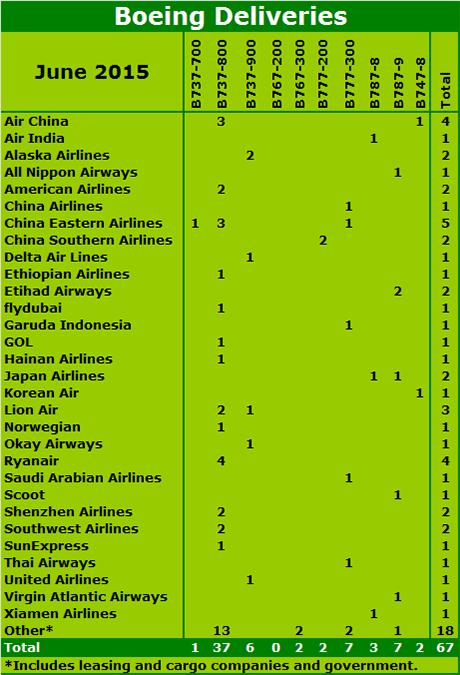 Boeing closed June with a total of 67 units being delivered, six more units than in May, but five less compared to the corresponding month of 2014. Nevertheless, the American producer’s total for the first six months of 2015 is 377 aircraft, an impressive 35 units (9.3%) more than in the corresponding period last year.

Airlines received a total of 44 single-aisle units from Boeing, seven units more than May, and two more of that delivered by Airbus. Ryanair was the largest recipient of the 737-800 in May, as it incorporated four of the variants into its ever growing fleet. It is also worth noting that although it is not a direct delivery from Boeing, the Irish ULCC has taken possession of its first ever 737-700 for flight crew training purposes. Air China and China Eastern Airlines both received three 737-800s. In total, 17 airlines were delivered single-aisle units from the American manufacturer during June, one less than the 18 carriers in May.

Analysis of wide-body deliveries reveals that Boeing handed over a total of 23 units to airlines in June, matching the amount delivered in May and April. However, the American producer delivered two less wide-body airframes compared to the same month in 2014. Boeing handed over 10 787s in June, decreasing from the 13 units it delivered in May. Air India, Japan Airlines, and Xiamen Airlines each received one 787-8, while Etihad Airways was the largest recipient of the 787-9, taking delivery of two of the variants. Other 787-9 customers receiving their latest aircraft were All Nippon Airways, Japan Airlines, Scoot and Virgin Atlantic Airways. The one other 787-9 was delivered to a leasing company. Two 747-8s were also delivered in June, with Air China and Korean Air receiving them respectively.