Capacity in Guatemala is on the up again despite previous annual growth being inconsistent; Volaris becomes latest carrier 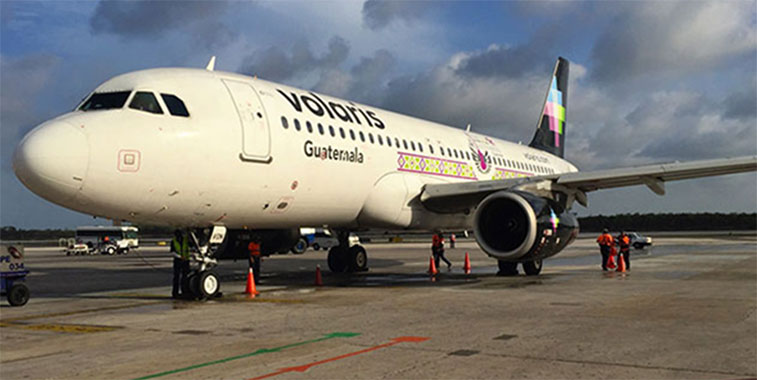 Volaris is the latest airline to serve the country of Guatemala. On 18 June, the Mexican LCC opened routes from Guatemala City to both Cancun and Guadalajara. With these route launches, Guatemala is now served by 15 airlines according to OAG Schedules Analyser data.

With its diverse indigenous culture, rich Mayan heritage and colonial charm, Guatemala is an intoxicating adventure for both the jaded and novice traveller. One of the favourite sites for anna.aero’s data elves to visit is Lake Atitlán in the Guatemalan Highlands, Central America’s deepest lake. The elves love nothing better than to sit on the shore in the town of Panajachel, and look out over the water towards the majestic Volcán San Pedro. Currently Guatemala is served by two commercial airports, Guatemala City and Flores (if you fancy visiting Lake Atitlán then the best airport to fly into is Guatemala City, 199 kilometres away). Guatemala City is the larger of the two airports, processing a total of 2.2m passengers in 2014, serving the capital and many of the urban regions to the south, while Flores serves Guatemala’s northern territories. 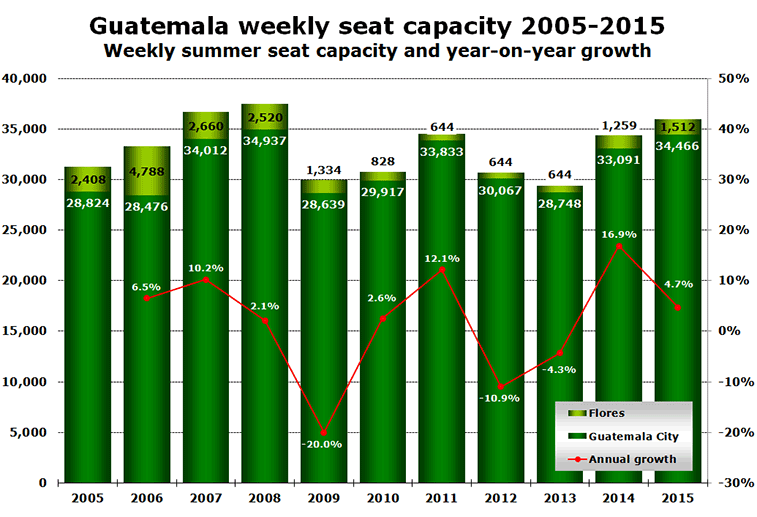 Until 2008, Guatemala was seeing a steady and consistent growth in capacity, achieving an average annual growth rate of 6.3%. Until this point, the Guatemalan government had implemented a project called the ‘Guatemala National Airport System Modernisation’, set up to meet the needs of growing passenger numbers and projected demands at the time. The focus of the project was to expand, improve and modernise the country’s airport system. What could not be seen though is the following years of unstable growth as a result of the global economic crisis. Both of the country’s main airports witnessed rapid declines in seat capacity during 2009. Flores Airport, which took the worst hit, was in decline before the economic crisis took place however, seeing a decrease in capacity of 86% from 2006 to 2011. This resulted in the airport losing three of its four routes, Houston Intercontinental (ending in 2006), Belize City (2008) and Cancun (2010). Services to Belize have since restarted (2014), resulting in a capacity growth at the northern airport by around 140% from 2013 to 2015. What is interesting to note however is that during the financial downturn, Latin America averaged a growth rate of 1.5% during 2009, while Guatemala capacity declined by 20%. Ever since the financial crisis, growth in the country has been unstable, but 2014 and 2015 statistics seem to show promising signs, with an average growth over the past two years of 11%. 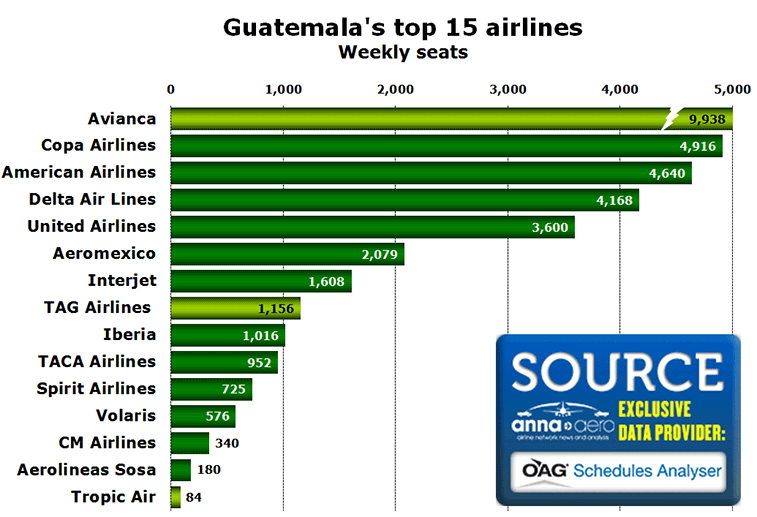 Guatemala City dominates the country’s aviation market, accounting for 96% of seat capacity in 2015. A dominance that has not changed much over the past 10 years, with the lowest recording being in 2006, when the airport only accounted for 83% of seat capacity. Of the 15 airlines that serve Guatemala, only three serve both commercial airports (highlighted in light green). Avianca is the leading carrier, accounting for 28% of weekly seat capacity, the same as 2014, although the airline’s capacity itself has grown 6.4% from the corresponding week of last year. The airline will serve eight destinations from the capital in S15, with San Salvador being the biggest route, occupying 35% of the Star Alliance member’s seat capacity. Incidentally this is also the largest route from Guatemala City, a sector which is also served by Iberia as a continuation of its services from Madrid, the airport’s only European route. Flights to San Salvador carried approximately 250,000 passengers in 2014, accounting for just over 11% of overall passenger traffic. Other routes served by Avianca from Guatemala City are Bogota, Flores, Los Angeles, Miami, San Jose, San Pedro Sula, and Tegucigalpa. Avianca’s only route from Flores is to Guatemala City.

Airlines showing the biggest growth in seat capacity from 2014 are Interjet with 35%, TAG Airlines at 31%, and American Airlines showing 11% growth, meaning it has climbed from fifth to third in the country’s top 12 airlines. United Airlines showed the greatest decline in seat capacity from last August, down 28%, resulting in the carrier being placed in fifth position for 2015, down from third in 2014. This shift came following the airline shrinking operations on its services to Houston Intercontinental (-7.4%), New York Newark (-42%) and Washington Dulles (-80%). 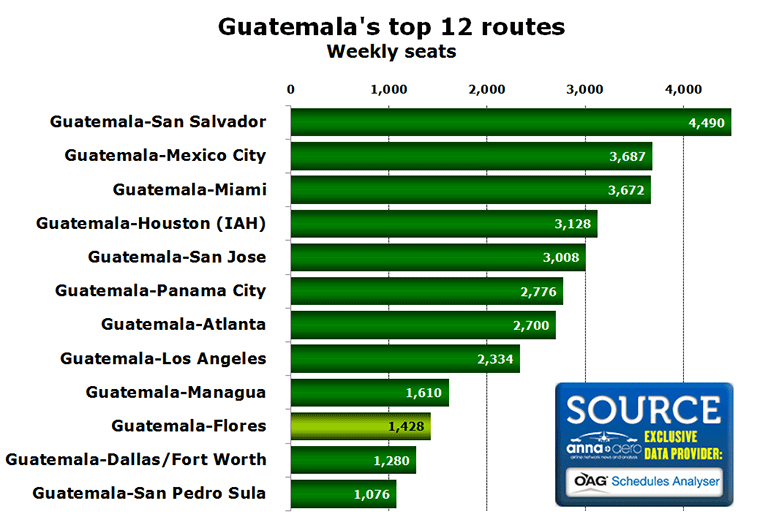 It’s of no surprise to see that all of the country’s top 12 routes originate from the capital, with the domestic sector to Flores (highlighted in light green) being in 10th spot. The route recording the biggest growth in capacity for 2015 is Managua, achieving an increase in seat capacity of 145% compared to last August, resulting in the sector securing ninth spot in 2015 compared to 13th last year. Other top 12 routes showing capacity growth this year are those to San Pedro Sula (+31%), Dallas/Fort Worth (+24%), Flores (+22%), Mexico City (+18%), Miami (+7.5%) and San Salvador (+6.9%). The route recording the biggest reduction in seats is San Jose, down 15% on last year, meaning the route from Guatemala City drops from second in 2014 to fifth in 2015. Volaris’ new services to Cancun and Guadalajara are placed in joint 17th respectively.