On 17 July, Czech Airlines launched a new twice-weekly service between Prague and Liverpool. Flights on the 1,226-kilometre sector will be flown on Mondays and Fridays using the SkyTeam member’s A319s. Cutting the ribbon are Liverpool Airport’s Air Service Development Manager, Paul Winfield, and Czech Airlines’ Marketing Manager, Jitka Kolářová, along with the Captain of the inaugural flight and fellow crew members. 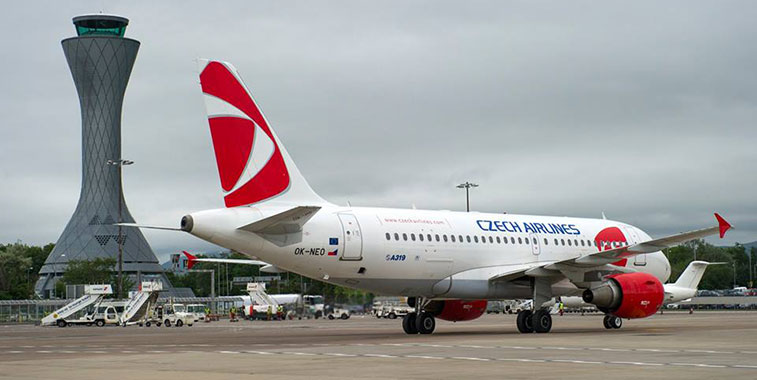 Pulling onto stand in Edinburgh on 14 July is Czech Airlines’ inaugural flight from Prague via Lodz. Services from Prague will compete with easyJet, while the 1,556-kilometre sector from Lodz will face no direct competition. Flights operate twice-weekly on Tuesdays and Saturdays. The airline also launched services from the Scottish capital to Rzeszow. Services to the Polish city will be flown on the same days as those to Prague and Lodz. On 14 July, Lodz Airport in Poland welcomed the arrival of Czech Airlines. The SkyTeam member will operate services from the Polish city to Edinburgh and Prague. Both will be flown twice-weekly on Tuesdays and Saturdays using the airline’s A319s. On 14 July, Czech Airlines launched services from Edinburgh to Rzeszow. Flights on the 1,804-kilometre sector will be flown twice-weekly on Tuesdays and Saturdays. Passengers and the crew were offered a slice of traditional launch cake before jetting off to Scotland. Czech Airlines becomes the second carrier to connect Rzeszow with the UK. Ryanair currently operates from the airport to Bristol, East Midlands, London Luton, London Stansted and Manchester.