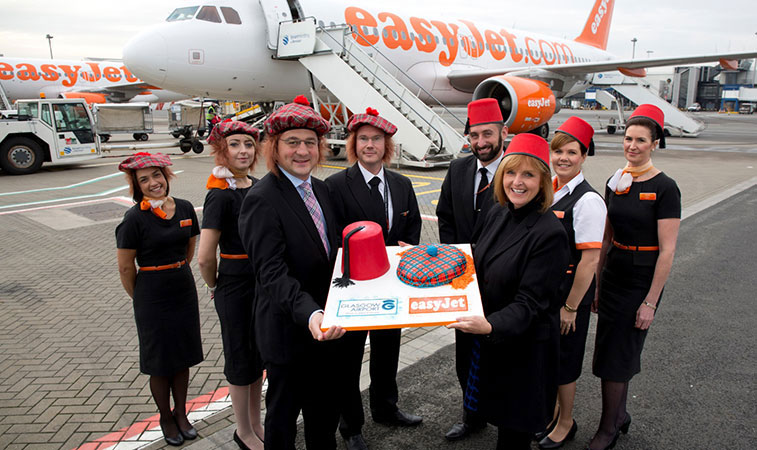 On 29 October, easyJet launched its latest service from Glasgow to Marrakech. In S15, easyJet will operate to a total of 12 destinations from the Moroccan airport, making them the third biggest carrier after Ryanair and Royal Air Maroc, occupying 17% of available weekly seat capacity.

Marrakech Airport is the second largest airport in Morocco after Casablanca, serving the country’s fourth largest city. One of anna.aero’s favourite places to visit in the city is Djemaa El-Fna, Marrakech’s main square. It’s full of hustle and bustle from morning to night, from snake charmers with hissing cobras to markets full of spicy flavours. This summer, 23 airlines will serve the city with a total of 55 non-stop destinations being available. These destinations are spread throughout Europe, from regional France to capital cities such as London and Madrid. 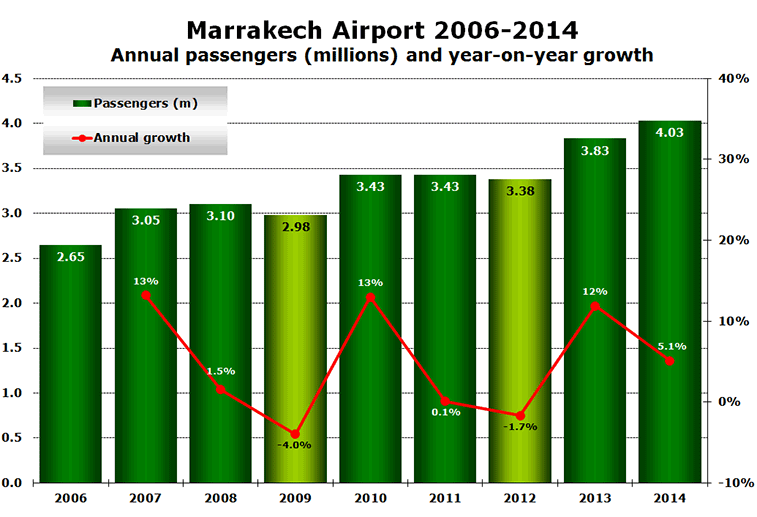 In 2014, Marrakech Airport recorded its third consecutive year of growth, passing the four million passenger mark for the first time. The airport has only recorded two years in the past nine where passenger numbers declined (highlighted in light green). What is interesting to see from the data is that Marrakech seems to have a consistent spike every three years, with 2007, 2010 and 2013 all showing an annual growth of either 12% or 13%. So far this year, the average monthly growth rate is 1.5% (January – May), so if the trend is to continue of seeing a spike every three years, Marrakech is more likely to see stronger growth in 2016 than in 2015. Overall this year seat capacity is up 4.1% for the week being analysed. So with positive monthly growth figures in average passenger numbers and seat capacity so far in 2015, anna.aero expects Marrakech to break the record of passing four million passengers again this year.

Entering Marrakech’s monthly passenger data for 2014 into anna.aero’s Seasonal Variation in Demand (SVID) calculator, the airport generated a score of 1.63 – an ‘Excellent’ rating. As a result, Marrakech ranks 16th out of 45 airports studied so far in 2015, lying between London City and Aberdeen airports. In order to gain an understanding of the seasonality in Marrakech and Morocco, a comparison was also done with Casablanca and Agadir airports. The former scored a respectable 2.46 ‘Good’ while the latter scored 1.31 ‘Excellent’, a very credible score. From the results of all three airports, we can see that Morocco has a very small variance in its seasonality. Marrakech’s seasonality has improved when compared to last year, where a score of 1.81 was achieved, although this was still classed as ‘Excellent’. However, even though passenger numbers declined by 1.7% in 2012, the airport’s SVID score was 0.99, the best it has recorded in recent times.

It appears that Marrakech is another airport that sees dominance from the ULCC Ryanair. The Irish airline has 29% of weekly seat capacity in S15, up from the 25% it achieved in S14. Fellow top three carriers Royal Air Maroc and easyJet however are showing decreases for this summer, with the Moroccan national carrier being down -26%, while Europe’s second largest LCC is showing a -5% decline in weekly seat capacity, a result of the airline ending services to London Stansted and shrinking capacity on other routes it serves (see below). 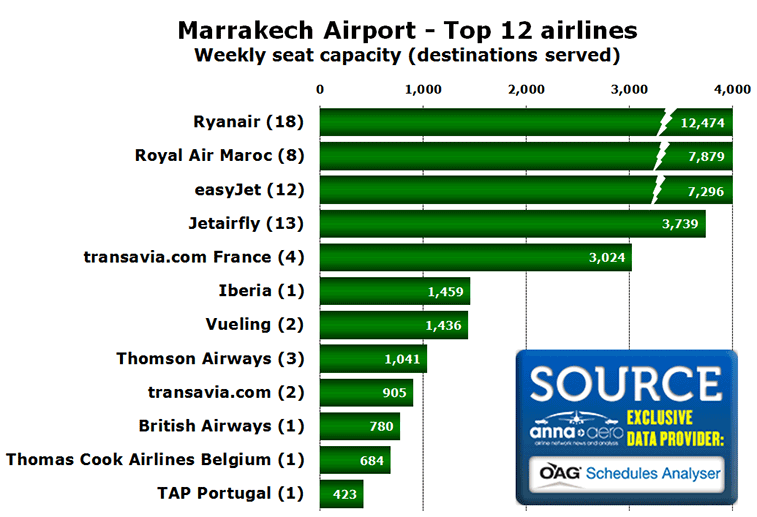 Although Ryanair is the number one carrier at Marrakech, it has been very inconsistent with its operations. The airline became the biggest operator in 2011, after filling the void left by the now defunct Atlas Blue. The ULCC grew seat capacity over that year by 32%, introducing services to Bremen, Eindhoven and London Stansted, although services to the German city no longer operate. However in 2012, Ryanair cut capacity by 44%, to then grow by 34% in 2013, and to then decrease by 18% in 2014. In 2015, the carrier has increased seat capacity by 9.1%, but with an average growth of 2.6% over the past five years, perhaps the ‘New Ryanair’ will become more consistent from 2016 onwards.

Iberia has climbed up the top 12 airline list for 2015, after being placed 12th in 2014. The oneworld member has doubled capacity for S15, achieving a growth rate of 102%. One airline to fall out of the top 12 is Air France, with TAP Portugal replacing the SkyTeam member to finalise the S15 top 12 airlines. 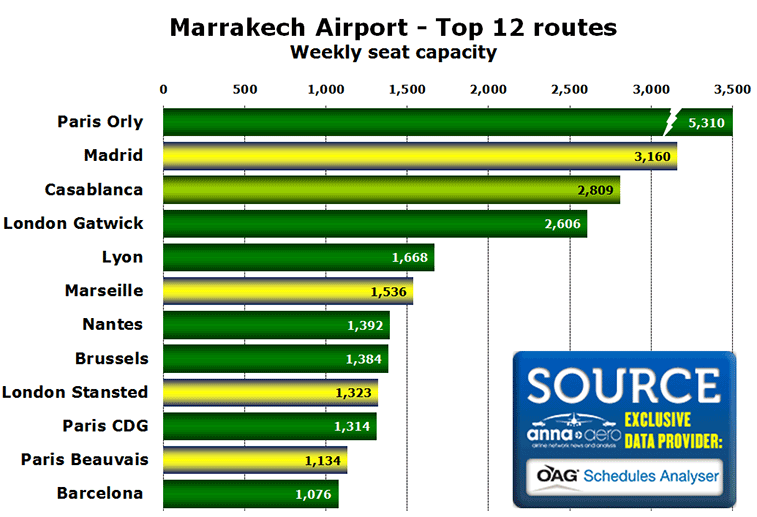 Due to the strong connection between France and Morocco, it’s of no surprise to see that six of the top 12 destinations from Marrakech are to French airports, three of them serving Paris. One domestic route made the top 12 (highlighted in light green), Casablanca, a route served by Royal Air Maroc four times daily. Although Ryanair is the number one carrier at Marrakech, only four of the top 12 destinations are served by the ULCC (highlighted in yellow and blue). Although Madrid is the second most popular destination, the Irish carrier does not serve the city pair alone, with Iberia also serving the Spanish capital nine times weekly, the same frequency as Ryanair. Madrid climbs the top 12 from a position of sixth last year to second in S15 thanks to Iberia’s new daily service which began on 1 April. Ryanair only serves Stansted and Paris Beauvais without competition, as Marseille is also served by Air France, Royal Air Maroc and Jetairfly. Two airports that are new to the top 12 are Paris Beauvais and Stansted. They replace Toulouse (-27%) and Milan Malpensa (-26%), where easyJet has reduced seat capacity. Apart from Iberia’s new Madrid service the other new service launched this summer is to Rome Fiumicino, operated by Vueling, which launched in May in competition with Alitalia.