Middle East to Australia market to grow by 13%; Emirates and Qantas control nearly 60% of weekly seats It was a year ago (15 July to be exact) that the last new route between the Middle East and Australia was started, the daily Etihad Airways service from Abu Dhabi to Perth. This does not mean that the market is not growing, with ASKs planned to grow by 13% between January 2015 and January 2016.

Given the defeat by 405 runs in the second test at Lord’s over the weekend, many England cricket fans may not be rushing out quite yet to book up for the next series on Australian soil in 2017/18, but one thing is for certain, there will be no shortage of ways to get down under via the MEB3 carriers’ (Emirates, Etihad Airways and Qatar Airways) respective networks, and now more than ever, of their partner airlines. Looking back to January 2007 and forward to next January’s peak operations in the Middle East to Australia market much has changed. Back in 2007, there was only one airline in the market, Emirates, which offered just three non-stop routes to Melbourne, Sydney and Perth – the biggest of which, in terms of ASKs, was the latter with around half of those available (42.19 million) at that time. The figures for Dubai to Sydney and Melbourne are artificially reduced from the actual capacity flown, as both routes had additional flights which operated one-stop through Singapore and Bangkok, whereas Perth was flown direct. 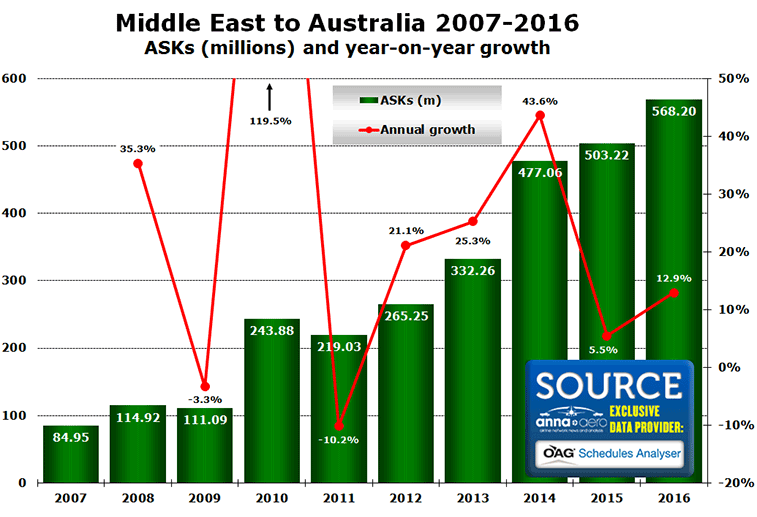 Source: OAG Schedules Analyser for w/c 18 January for each year.

Dubai to Sydney #1 for ASKs

By 2009, the market had seen a new entrant, with Etihad Airways beginning non-stop services from Abu Dhabi to Sydney. However, the year of the most dramatic increase, nearly a 120% hike in ASKs, came the year after. New direct routes were launched from Dubai to Brisbane (Emirates), Doha to Melbourne (Qatar Airways) and Abu Dhabi to Melbourne (Etihad). The new routes were also joined with ASK growth on Emirates’ three existing routes, and a marginal increase on Etihad’s Abu Dhabi to Sydney sector.

Jumping forward to next January, the market has swelled to 11 non-stop routes, some having more than one serving carrier, with ASKs up by nearly seven times the amount available in 2007. Between January 2015 and January 2016, the overall annual growth in ASKs is expected to be close to 13%. The biggest route is now Emirates’ Dubai to Sydney sector, with nearly 22% of all ASKs (127.73 million) in the Middle East to Australia market.

When regarding weekly non-stop seat increases over the last five years, the battle between the MEB3 carriers for growth in this market is being won by Etihad, which has added 199% more seats in that time. This level of growth outstrips that provided by both Qatar Airways (+123%) and Emirates (+88%). However, the latter’s absolute increase of 10,773 weekly seats is more than that achieved by Etihad (9,871) and Qatar (2,583) during the period evaluated.

Of the 50,380 weekly seats on sale in January 2016, Emirates commands 43% of those available. However, add its partner Qantas, which started flights from Sydney and Melbourne to Dubai in March 2013, and between them the two airlines offer 59%. The same can be said for #2 carrier Etihad, which alone has 29% of seats, but with its partner Virgin Australia Airlines, this increases to 32% of all non-stop weekly seats between the Middle East and Australia. 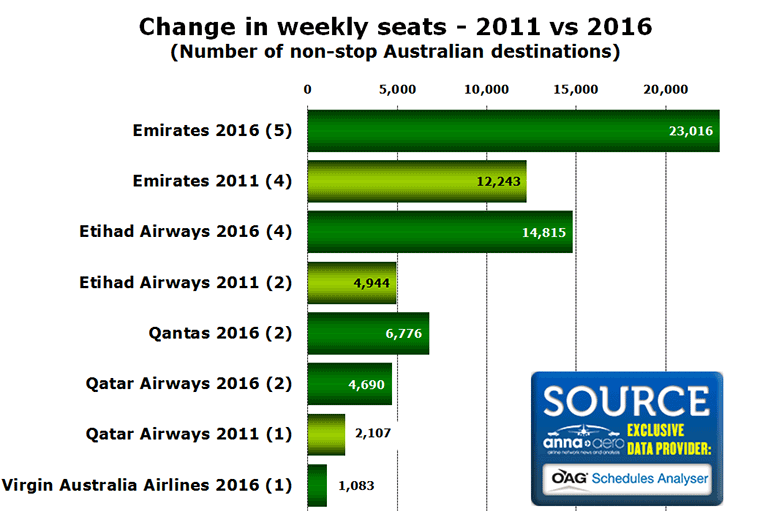 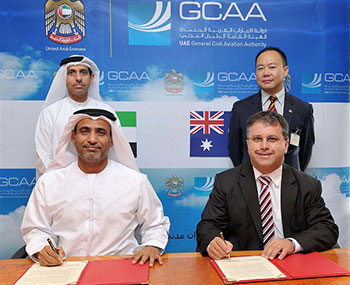 The last round of bilateral talks between UAE and Australia was signed in April 2013. A sixth Australian destination is permitted under this agreement, perhaps opening up access to Gold Coast (OOL) or Cairns (CNS) in the future. Qatar Airways, although limited to 14 weekly services on the OZB4 – the Australian Big Four cities – of Sydney, Melbourne, Brisbane and Perth, could also fly to these unserved points if they wished to do so.

In those five years, all of the MEB3 carriers have added new non-stop Australian destinations to their respective portfolios – with Emirates adding Adelaide, Etihad to Brisbane and Perth, and Qatar Airways also adding Western Australia’s largest city. As indicated previously, both Qantas and Virgin Australia have entered the market too in that period, with the latter offering thrice-weekly services next January between Sydney and Abu Dhabi.

The biggest unserved destinations in Australia that are yet to receive the attention of the MEB3 carriers, or indeed their partners, are Gold Coast (which handled 5.8m passengers in 2014) and Cairns (4.3m). Our data elves contacted one of their sources down under and they believe that there is currently no restriction for either Qatar Airways or the UAE airlines to begin services outside of the OZB4 – the Australian Big Four cities – of Sydney, Melbourne, Brisbane and Perth under the respective bilateral agreements.