Norwegian’s first year of UK-US services analysed; over 200,000 passengers carried with average load factors of around 93% Not one, not two, but three (yes, three!) anna.aero cakes were baked last July to celebrate the launch of Norwegian’s transatlantic services from London Gatwick to Los Angeles, New York JFK and Fort Lauderdale.

Norwegian has now been operating its transatlantic services from London Gatwick for just over a year. The first three routes to Fort Lauderdale, Los Angeles and New York JFK all began in the first week of July 2014 amidst considerable media interest. anna.aero was there to celebrate all three route launches with our own specially-designed cakes.

So how successful have these new routes been from the UK’s second busiest airport? According to UK CAA data Norwegian has transported around 212,000 passengers in the first 12 months across all three routes, none of which are served by any other carrier from Gatwick. The New York route has seen almost 100,000 passengers followed by Los Angeles (65,000) and Fort Lauderdale (almost 50,000). 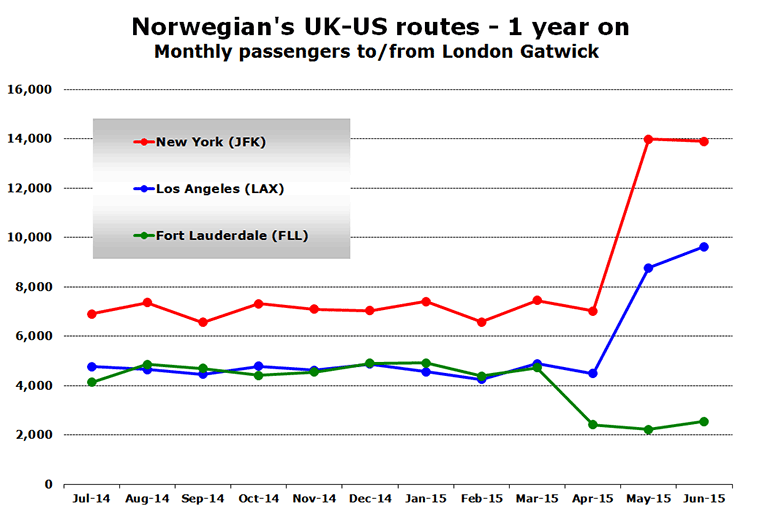 From when the routes launched until the end of March 2015 New York was served with thrice-weekly flights while Fort Lauderdale and Los Angeles were each served with twice-weekly flights. Fort Lauderdale service was reduced to weekly from April 2015. In May frequency to New York was increased to six flights per week, while Los Angeles service was also doubled to four flights per week.

Load factors of between 90% and 96% for most months/routes

Using CAA data for aircraft movements, and assuming that all flights were operated by the airline’s 291-seat 787-8s, we can estimate the actual load factors for each route for each month. These are impressively high right from the first month. No route has achieved an estimated load factor of less than 88% for any month in the first year of operation. 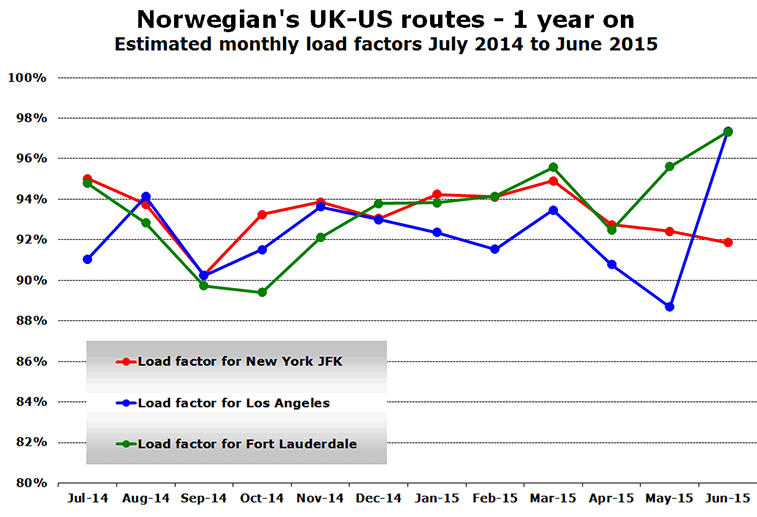 Overall, across the first year we estimate that the Fort Lauderdale route had a load factor of 93.2%, just beating New York JFK (93.1%) and Los Angeles (92.4%). Impressively, the doubling of frequency from May on the New York and Los Angeles routes did not have a detrimental impact on load factors, though demand for these routes would naturally be stronger as the summer season evolves.

Book early and get some great fares

According to Norwegian’s recent 2015 Q2 presentation, its long-haul operations (which began in May 2013) have carried 1.7 million passengers across 29 routes using eight 787-8s (as of May 2015). In the first half of 2015 almost 600,000 passengers have been carried, of which less than 20% (around 114,000) have been on the UK routes to the US. Based on interpretation of a graph in the airline’s presentation, anna.aero estimates that the average revenue per passenger across all of the airline’s long-haul routes is around 3,200 Norwegian Krona (NOK) which at current exchange rates is equivalent to around 390 US Dollars, 360 Euros or £250. In terms of its long-haul operations the airline says there has been “strong progress for long-haul”, has “reached critical mass and built market presence”, and “expect positive contribution going forward”. However, a “positive contribution” is not quite the same as being profitable according to anna.aero’s understanding of airline economics terminology.

To better understand whether Norwegian’s low-cost, long-haul business model really delivers low fares, we collected fare data on the New York and Los Angeles routes from Gatwick for the remainder of 2015. These are the lowest available one-way fares (including taxes) in each direction. 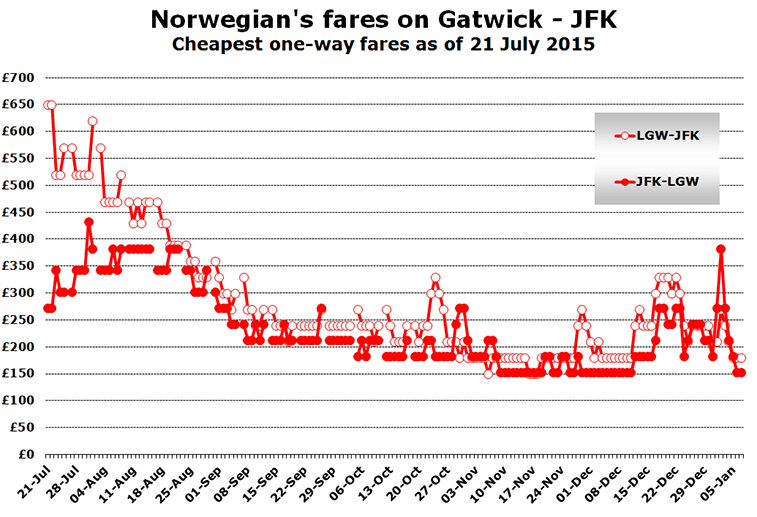 It should be noted that the lowest fare indicated is usually in the airline’s “LowFare” category. This allows 10kg of hand luggage, but does not allow for any checked baggage, seat reservation or meals. The airline’s “LowFare+” offering is usually around £50 more expensive (per sector) but does include 20kg of checked baggage, free seat reservation and free meals. There is also a more expensive “Flex” offering which allows two pieces of checked baggage, fast track, as well as free changes and refunds. All of these offerings are in “Economy” which has 31 inch seat pitch. The airline also offers a “Premium” cabin (of 32 seats) with 46 inch seat pitch and access to a lounge at selected airports.

As with typical LCC short-haul flights, seats booked further in advance will be considerably cheaper than those booked at the last minute. On the New York route a return flight in the next week would cost a minimum of £800 while in mid-November return flights for £300 are possible. However, even five months out, fares around Christmas and New Year are already significantly more expensive as the airline knows demand will be higher so it can afford to raise fares. 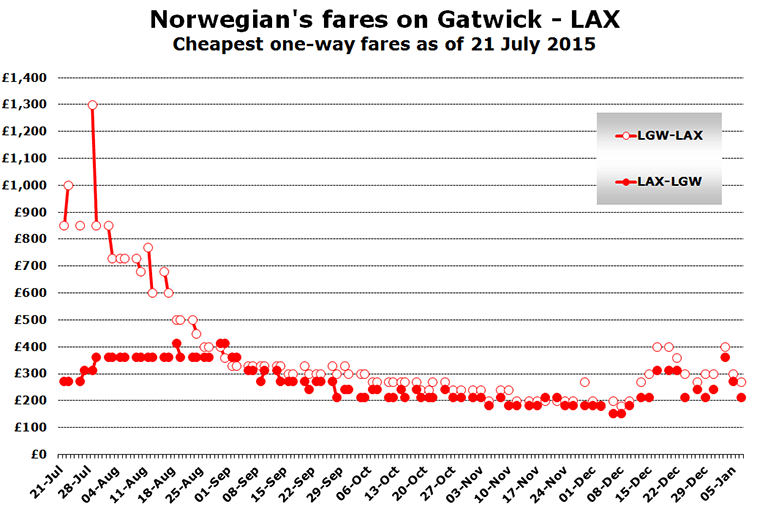 On the longer Los Angeles sector (8,795 kilometres versus 5,565 kilometres to New York) fares are not surprisingly higher. The outbound flight to California on 27 July is full, while the only seats available on 29 July cost £1,299, but this is a PremiumFlex fare. However, from early September onwards return fares of less than £700 are possible, while travellers interested in visiting “The Golden State” in mid-November could do so for less than £400 if booked now (and taking only hand luggage).

Orlando started in April, Boston coming next May

Apart from these first three routes, Norwegian now also serves Orlando from Gatwick (since 4 April 2015) with San Juan in Puerto Rico being added from 1 November, and Boston planned as the next US destination from London starting in May 2016. 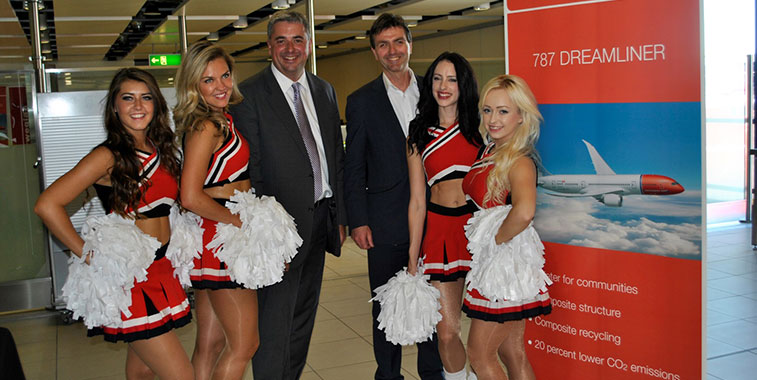 London Gatwick Airport’s Stewart Wingate (CEO) and Guy Stephenson (CCO) look reasonably happy at the launch last July of Norwegian’s three transatlantic services to Fort Lauderdale, Los Angeles and New York. Since then the airline has added flights to Orlando (in April of this year) and plans to add San Juan in Puerto Rico in November and Boston next May.