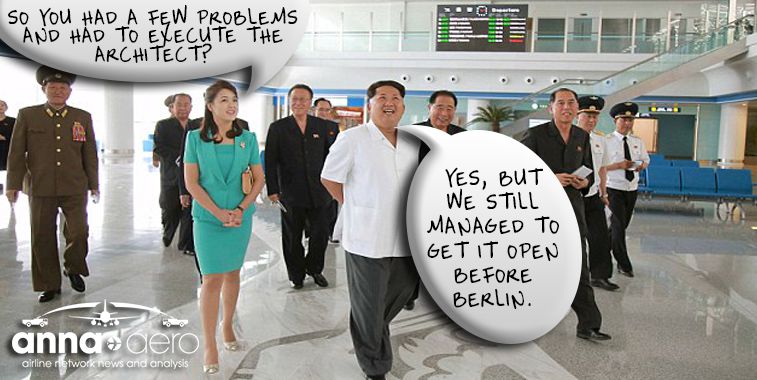 New airport to cope with the expected influx: Astute readers of the graph on this page will notice that capacity in the DPRK market is a teeny-weeny bit flat with a variance of two weekly seats between 2012-15.

The Democratic People’s Republic of Korea (DPRK) air transport business is clearly a completely planned affair under the “Juche” principles of the Eternal President (a post the Great Leader Kim Il-sung was gifted by the adoring North Korean people after his death in 1994). Over the last 10 years the number of seats available in the North Korean market has risen steadily, with some steep declines, increases, and long flat spots along the way. Overall it has risen from 1,342 seats in 2006 to 1,660 seats this July – an additional 24% of seats in the timeframe evaluated. In the S15 schedule, Air Koryo, the national airline of the DPRK, commands the lion’s share of weekly seats (77%), with the only other serving carrier to Pyongyang being Air China. 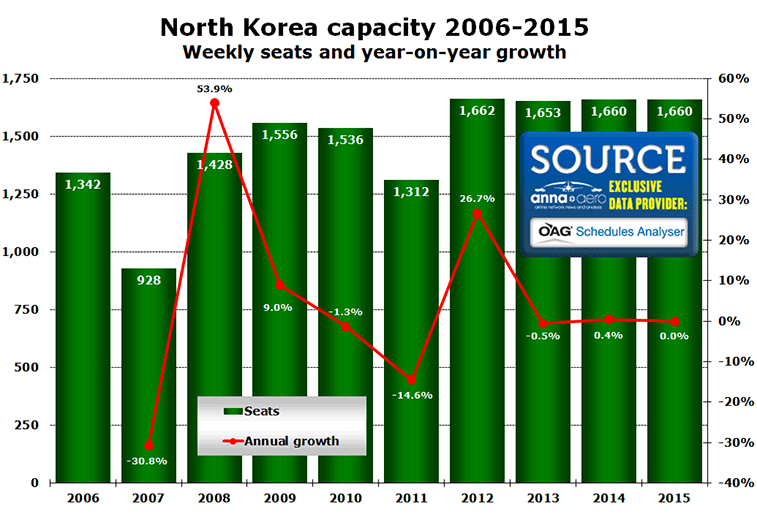 In the S12 and S13 operational seasons, Pyongyang offered services to five destinations – Beijing, Shenyang, Vladivostok, Kuala Lumpur and Bangkok. Despite most travellers getting to Pyongyang via Beijing, the route to Bangkok had been a mainstay of the airport’s network, being served from at least 2006 as the graph indicates. However, relaxing weekends away in the Thai capital for North Korea’s yuppies appears to have been curtailed in favour of a link to Kuala Lumpur from S14 onwards. This summer’s network from North Korea, boasts four destinations, as follows:

The next time to see Pyongyang’s new Terminal 2 on TV will be for the 5-8 August visit of Lee Hee-ho – widow of former South Korean president Kim Dae-jung (in office 1998-2003). In a personal invitation by Kim Jong-un, the North Koreans unusually suggested that the former first lady flies to Pyongyang, the first time a high-level South Korean visiting the North has used the direct route over the West (Yellow) Sea, since November 2008. Presumably the DPRK is hoping the new terminal will gets lots of free global primetime TV; anna.aero wonders what other clever tricks they have picked up from Ryanair, the real masters of brainwashing and propaganda. 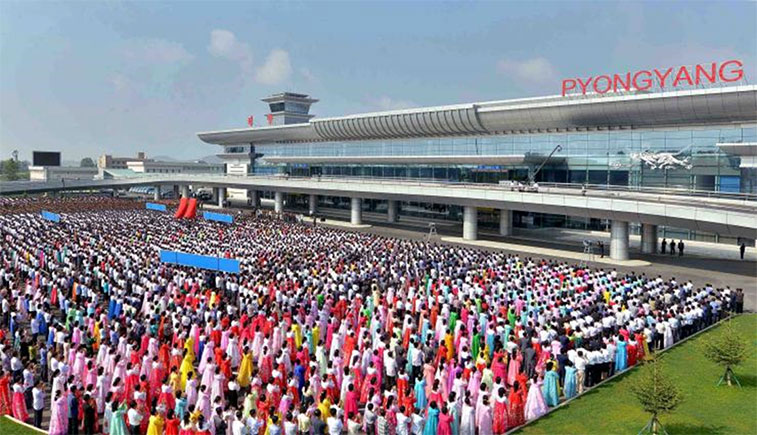 Workers and peasants spontaneously flocked to celebrate the official opening of the new Pyongyang terminal earlier this month. Previously the DPRK’s Korean Central News Agency has reported Kim Jong-un’s unhappiness with initial progress: “Defects were manifested in the last phase of the construction of the Terminal 2 because the designers failed to bear in mind the party’s idea of architectural beauty.” anna.aero has been unable to verify the wide reports that the architect was subsequently executed, although it’s hard to imagine great outrage among the world’s travelling public were the same fate to befall a few more of our great facilitation planners.