Jetstar Japan, the joint venture between Japan Airlines and Qantas, is the leading LCC in the Japanese domestic market, though it has just 4.6% of the market this August. The carrier operates a total of 19 domestic routes this summer and celebrated its third anniversary at the beginning of July. Route launches last October between Osaka Kansai and Oita, and between Tokyo Narita and Kumamoto, were celebrated in the traditional way with an array of mascots.

Japan’s two largest airlines, All Nippon Airways (ANA) and Japan Airlines (JAL), report detailed monthly passenger statistics. Since our last analysis of these figures almost a year ago, domestic passenger numbers on the two carriers has remained virtually unchanged. However, international traffic on both carriers has been growing significantly, with the two carriers combined reporting double-digit growth in international passengers in February, March, April and May. Load factors on domestic flights with these two major carriers continue to be mostly in the range of 60% to 70%. International load factors are typically between 70% and 80% on a monthly basis. 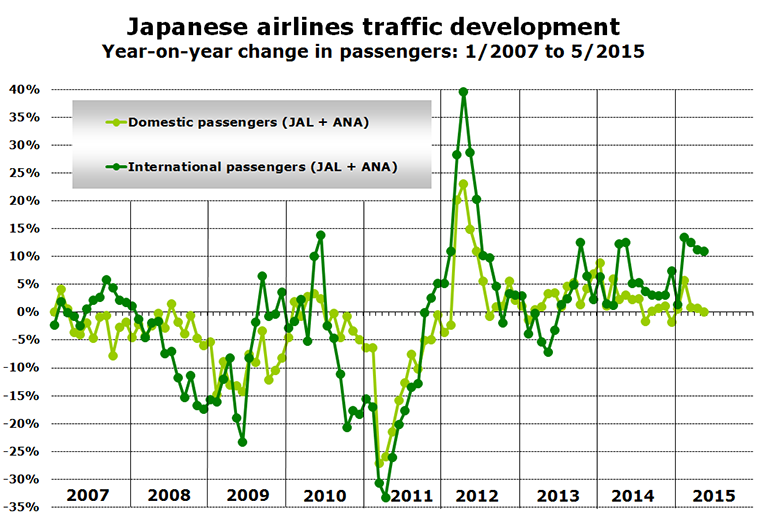 ANA and JAL combined now account for just under three-quarters of domestic seat capacity, with nearest rival Skymark Airlines reporting a year-on-year decline as a result of its on-going financial issues. The country’s three major LCCs (Jetstar Japan, Peach Aviation and Vanilla Air) continue to grow their market share and now account for around 8% of domestic seat capacity, though with their higher load factors this may represent close to 10% of actual passenger numbers.

International capacity up over 13% this summer

Analysis of OAG schedule data indicates that international seat capacity from Japanese airports is up over 13% this August compared with the same month last year. Of the top 12 country markets three are showing are decline in seat capacity (Guam, Philippines and Vietnam), while four are showing increases of over 25%. This includes the biggest country market of all, China, where capacity is up over 30%. Given the large number of new routes between China and Japan that anna.aero has identified in recent months this comes as no great surprise. 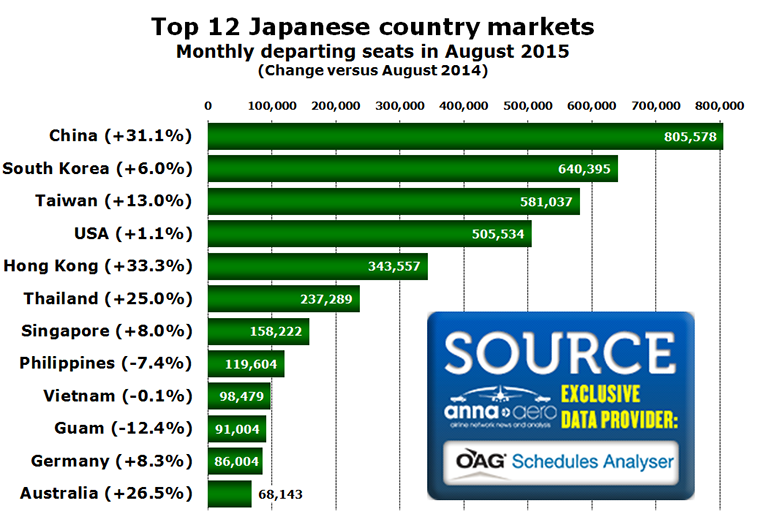 ANA and JAL now offer very similar seat capacity on international flights from Japan, with ANA possibly set to overtake JAL in the coming months for the first time. Among the leading foreign airlines serving the Japanese market two have seen particularly significant capacity growth in the last 12 months; China Eastern Airlines with a 42% increase in seats, and EVA Air with a 35% increase. China Eastern’s most recent new routes to Japan were a Fuzhou-Okinawa link which launched on 1 July, followed by Nanjing-Shizuoka and Yanji-Osaka Kansai which both began on 4 July. 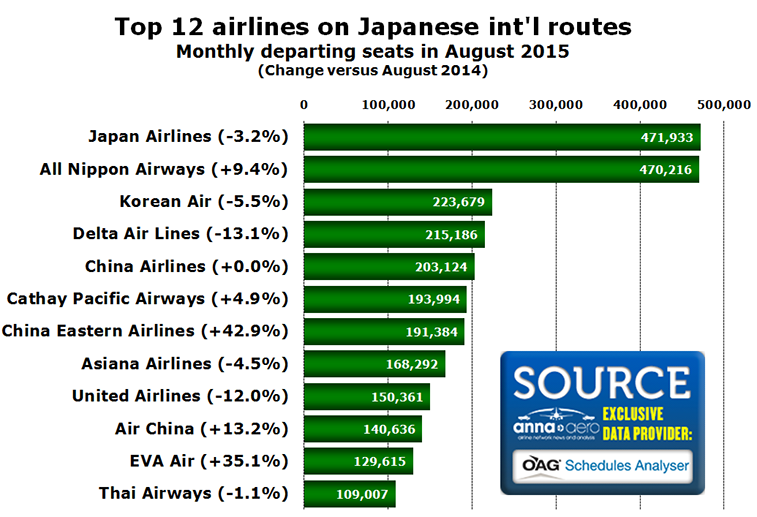