The arrival of Wizz Air’s third based aircraft at Skopje Airport at the end of June enabled the ULCC to start five new routes, three of which are in Germany. This brings the airline’s network at the Macedonian Airport to 19. Wizz Air now accounts for 45% of scheduled seat capacity at the airport.

Skopje Alexander The Great Airport has been served by Wizz Air since June 2011 when the carrier began flights from London Luton. At the start of the W12 season the airport in the Republic of Macedonia became a Wizz Air base and since then the airline’s network from the airport has grown rapidly. In the last few weeks five new routes have been launched, bringing the total to 19. The latest destinations to be offered by the ULCC are: Barcelona in Spain; Friedrichshafen, Lϋbeck and Nuremberg in Germany; and Oslo Torp in Norway. Impressively, no destinations have (so far) been dropped, though Gothenburg services switched airports earlier this year when Save was closed to commercial operations. Wizz Air now bases a total of three A320s at the Macedonian airport. 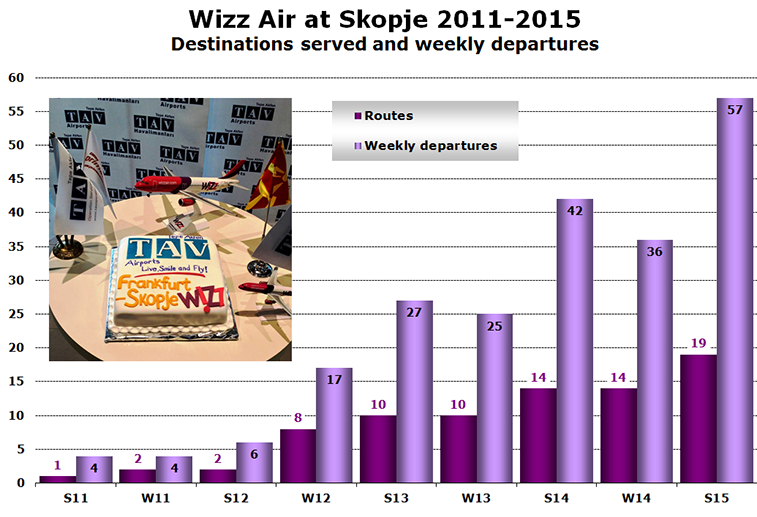 A total of 57 weekly departures are now operated across 19 destinations resulting in the average weekly frequency being exactly three flights per week. The only route served with a daily flight is Malmo in Sweden. A total of nine countries are served (if Basel/Mulhouse is considered in France as Wizz Air uses the airport designator MLH rather than the more usual BSL) with 18 flights per week spread across seven destinations in Germany, and 13 flights per week to three destinations in Sweden. These two country markets alone account for more half of all Wizz Air’s flights from Skopje.

Wizz Air is by far the leading carrier at the airport with over 10,000 weekly departing seats, accounting for 45% of the total scheduled seat capacity at the airport this summer. Austrian Airlines and Turkish Airlines are the only other carriers offering more than 2,000 weekly seats from the airport on their hub-feeding routes to Vienna and Istanbul Atatϋrk respectively.