So Istanbul has the biggest hub. No wonder then that they are building the biggest airport too. To find out more about this mega-hub, get yourself to the mega conference hosted by İGA – the new airport company.

There are many ways to compare airline hubs, but this week anna.aero reveals which airlines have the biggest hubs in terms of total number of destinations served non-stop. This admittedly takes no account of frequency of service on routes or indeed aircraft size, both of which may be better indicators of the size of an airline hub. However, given that anna.aero is about airline route networks we thought it would still be interesting to see which carriers across the globe (and within specific geographic regions) gave passengers the greatest range of destinations to choose from.

At some point in the last couple of years Turkish Airlines overtook Delta Air Lines for the claim of having the biggest single hub network of non-stop destinations. The Star Alliance carrier has now built a significant lead at Istanbul Atatϋrk over its SkyTeam rival at Atlanta and looks likely to remain the leader for the foreseeable future. 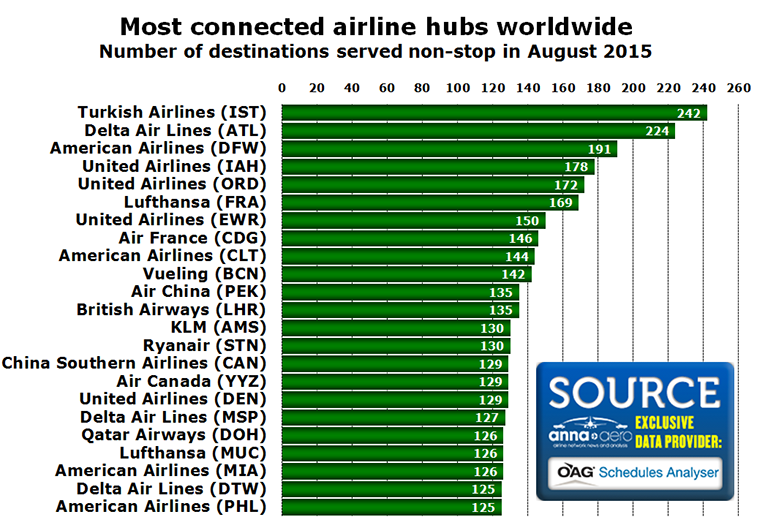 There are now a total of 23 airports at which a specific carrier operates flights to at least 125 destinations non-stop. Of these 12 are in the US, eight are in Europe, two are in Asia and one in the Middle East. Only two of these mega-hubs are operated by LCCs; Vueling in Barcelona and Ryanair at London Stansted. United Airlines has three hubs in the top six (and four in the top 12), while American Airlines also has four hubs in the top 23. Delta Air Lines has three hubs with more than 125 destinations, while Lufthansa is the only non-US carrier to feature twice in the rankings. Among the top 12 best connected North American airline hubs, only one is not in the US. Air Canada’s Toronto Pearson base ranks 7th in North America. The remaining positions are shared out among the USB3; American Airlines, Delta Air Lines and United Airlines. 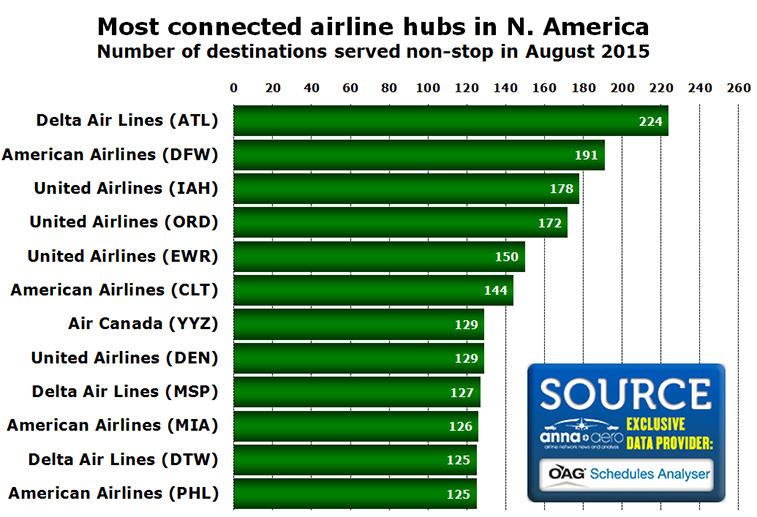 Twelve airports in Europe have airlines operating non-stop to more than 100 destinations. Three of the airports are in the UK, with two each in Germany and Spain. Interestingly, Vueling now serves more destinations non-stop from its Barcelona base (142) than fellow IAG member airline British Airways does from London Heathrow (135). Lufthansa is the only carrier to make the top 12 twice, with both its Frankfurt and Munich hubs serving over 120 destinations. Since Austrian Airlines also makes the top 12 the Lufthansa group of airlines is actually represented three times in these rankings. 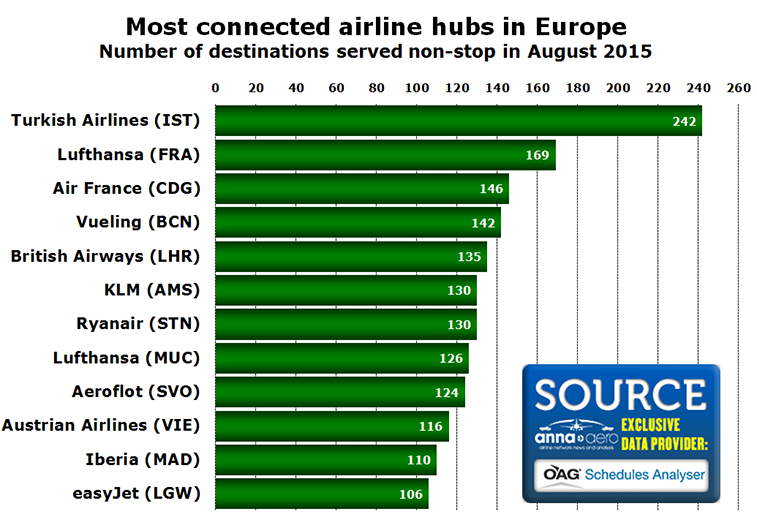 China’s three biggest airlines top the Asian rankings, with each serving over 100 destinations from one airport; Air China from Beijing, China Southern Airlines from Guangzhou and China Eastern Airlines from Shanghai Pudong. Each also appears a second time in the top 12, while Sichuan Airlines’ Chengdu base makes it seven Chinese airline hubs in the top 12. Two South Korean carriers, Asiana Airlines and Korean Air, also feature, making Seoul Incheon the only airport to appear twice in the top 12. AirAsia’s Kuala Lumpur base is the only LCC base to make the rankings while there are no airlines from either India or Japan. 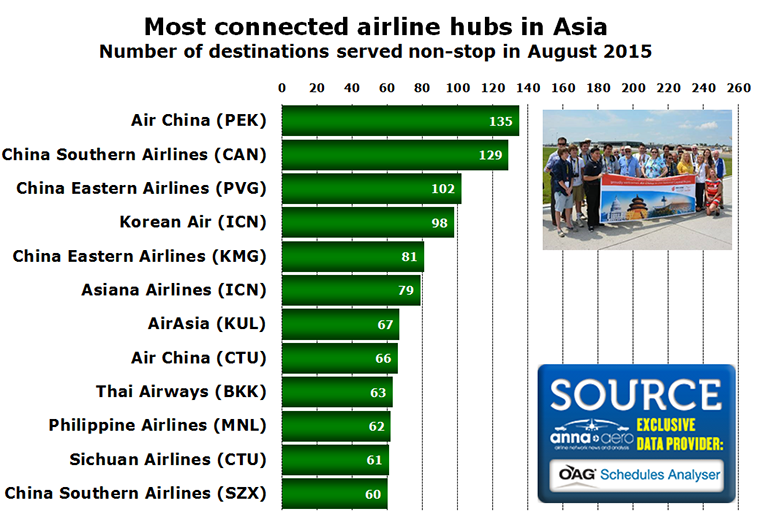 In the Middle East, Qatar Airways has overtaken Emirates in terms of destinations served non-stop from their hubs. Emirates does not even make the top 23 globally, but ranks second globally (just behind Turkish Airlines) for the airline hub with the most seat capacity at a single hub. Dubai-based flydubai, which launched only just over six years ago, now serves 90 destinations non-stop, three more than Abu Dhabi-based Etihad Airways. Saudi Arabian Airlines does a Lufthansa by appearing twice in the regional top 12, while Air Arabia’s Sharjah base joins flydubai as the second LCC to make the rankings. 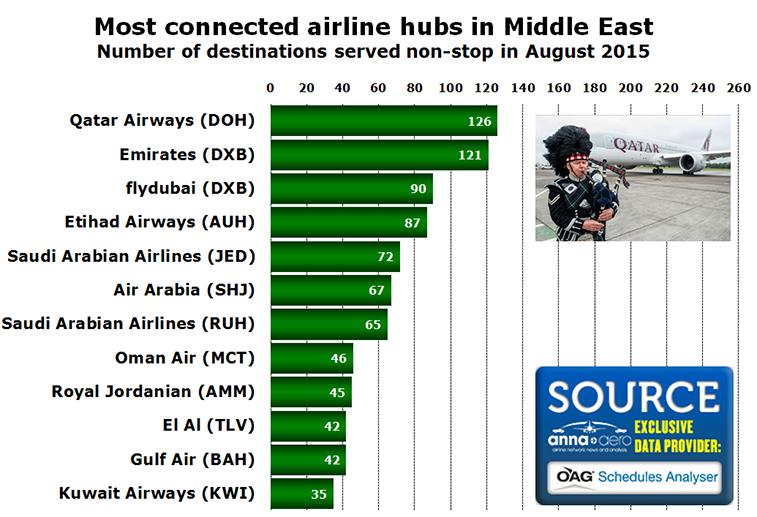 In Latin America Aeromexico’s Mexico City base is four destinations ahead of Copa Airlines’ Panama City base. With Brazil the biggest market in the region it is no surprise that Sao Paulo’s Guarulhos airport should appear twice (thanks to GOL and TAM Airlines), with TAM Airlines also appearing a second time due to its Brasilia base. Azul Airlines is another Brazilian airline that features twice. Interjet’s growing presence at Mexico City means that the Mexican capital also appears twice in the top 12 rankings. 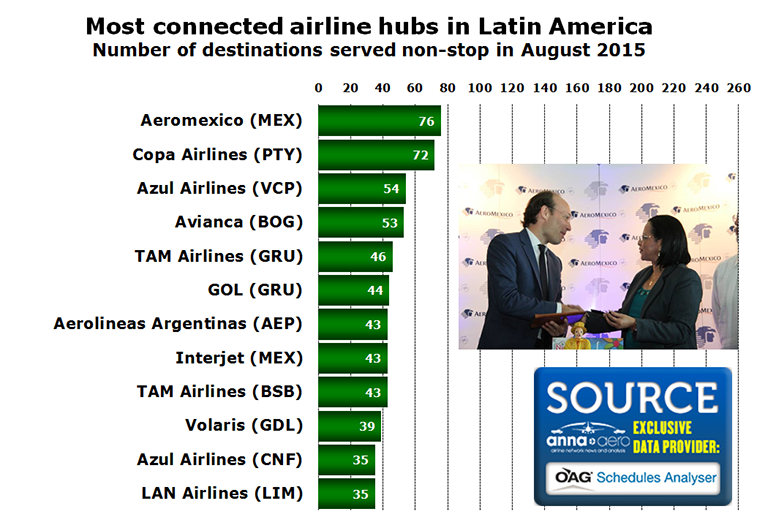 There are 12 different airports in the African top 12 hubs, which features 10 different airlines. Air Algérie and Tunisair both feature twice, though neither makes it into the top three. Royal Air Maroc still holds a significant lead over Ethiopian Airlines, though EGYPTAIR’s Cairo base jumps from third to first if seat capacity is used as the measure. No LCC makes it into the top 12. 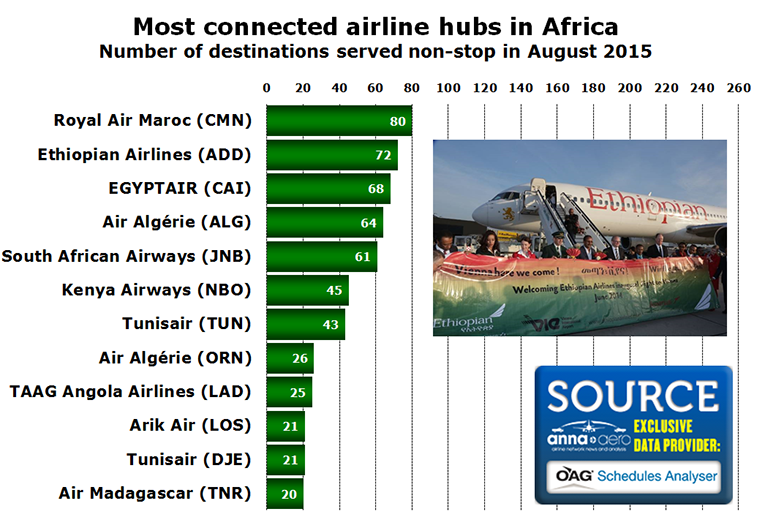 In the South Pacific region (which includes Australia and New Zealand) the battle between Air New Zealand and Qantas sees the former’s Auckland base (44 routes) just beat the latter’s Sydney base (41 routes). Sydney appears three times in the top 12 while Brisbane and Melbourne both appear twice.