On 30 June, Karlsruhe/Baden-Baden Airport welcomed the arrival of Turkish Airlines’ new four times weekly service from Istanbul Atatürk, a service that was awarded anna.aero’s ‘Route of the Week’. This summer, the Star Alliance member will occupy 3.2% of the weekly seats available, an additional contribution that has helped the airport report a 17% rise in seat capacity.

Karlsruhe/Baden-Baden Airport is the second largest airport in the German state of Baden-Württemberg, just behind Stuttgart. When visiting the region, anna.aero’s data elves love nothing more than to go to Caracalla-Therme Spa, where the waters come from an artesian aquifer under Florentiner Mountain. Of course, the best way to reach the region is to fly, so anna.aero has taken a look to see how the 983,451 passengers of 2014 travelled through the airport, and how the aviation market at Karlsruhe/Baden-Baden has changed in 2015. 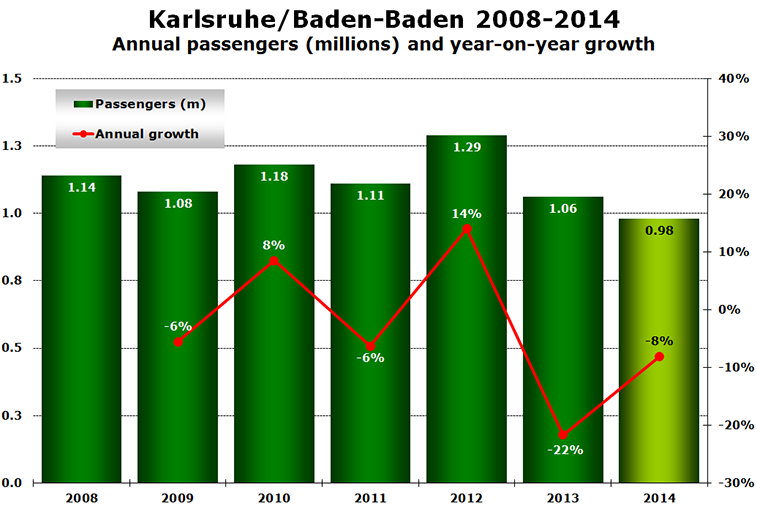 Passenger numbers slump below one million

Last year witnessed Karlsruhe/Baden-Baden Airport passenger numbers dip below one million (highlighted in light green), with the airport only recording two years of growth since the economic crisis. Since 2009, the airport has flat-lined, with an average decline in passenger traffic of -3.3%. This has occurred despite Ryanair launching its fourth German base at the facility in 2012, the year in which passenger numbers peaked at 1.29 million. The ULCC has been serving the airport since 2003, when it began initial operations from London Stansted. This summer, the Irish carrier will operate to 13 destinations, down from the 15 operated in 2014, resulting from the loss of services to Stockholm Skavsta and Tenerife South. Ryanair’s largest growing route in 2015 is Stansted, achieving a capacity growth of 45%, meaning it becomes the airline’s second largest route out of the airport after Palma de Mallorca, a route that the airline has grown 14% in seat capacity when compared to last year. 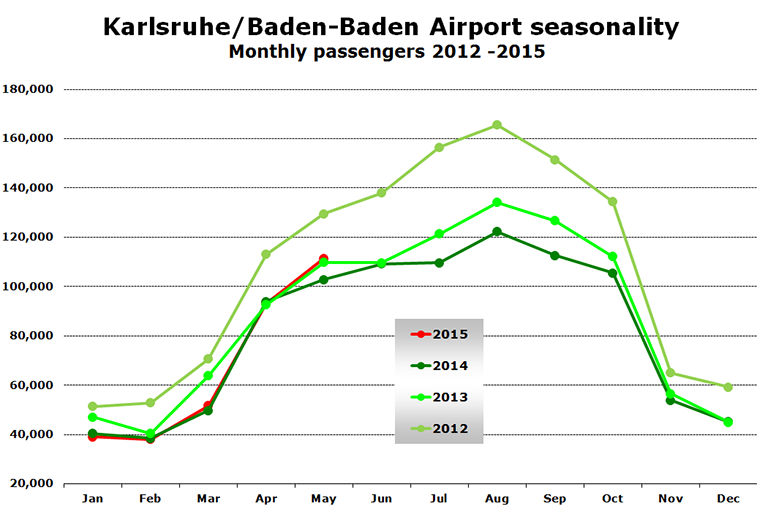 Still far away from 2012 figures

So far in 2015, the airport has only recorded growth in two of the five months that anna.aero has data for, with March showing a growth of 3.8% and May showing a healthy growth of 7.8%. Despite this, the period from January to May is showing an average passenger growth rate of 1.4%. Although the airport is showing signs of growth on its 2014 passenger numbers, the facility is still averaging -22% less passengers a month than the figures seen in 2012. As an example, February this year is down -28% on the passenger throughput seen in the same corresponding month three years ago.

The airport’s seasonality profile gives it a SVID score of 17.88 (“Poor”). In comparison, Stuttgart Airport, also in the Baden-Württemberg region recorded a score of 7.31 (“Good”). Friedrichshafen, an airport with a similar route portfolio to Karlsruhe/Baden-Baden and also served by Turkish Airlines, scored 13.95, also (“Poor”). 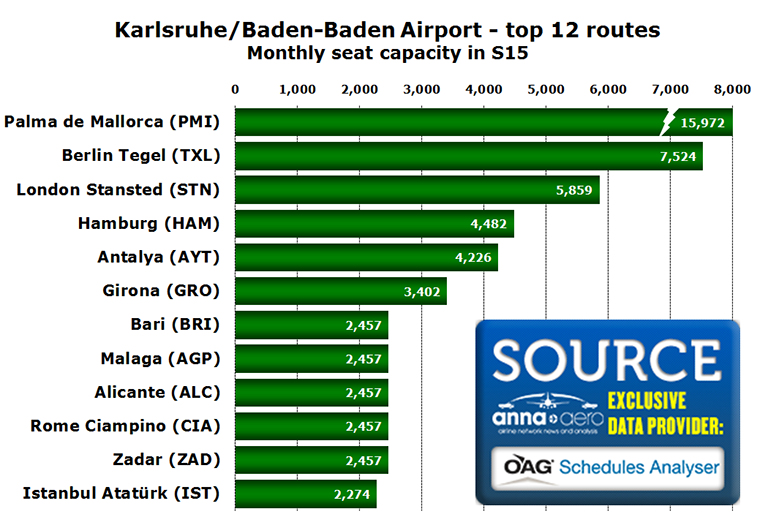 Although the service only launched just over three weeks ago, Turkish Airlines’ route to Istanbul Atatürk joins the route party in 12th place, pushing Porto into 13th. Coincidentally, Ryanair’s route to Portugal’s second city is recording a decline in seat capacity of -56% this summer when compared to S14. The most impressive route growth for S15 is Antalya, showing an increase in seat capacity of 82%, meaning the Turkish airport is the fifth most popular route, up from 19th in 2014, a position that is now taken by Rhodes. Apart from the two Turkish airports, the only other new member to the top 12 is Malaga, which this summer is showing a seat capacity increase of 31%. The three routes that have left the top 12 are Stockholm Skavsta (services ended), Thessaloniki (-44%), and Porto. 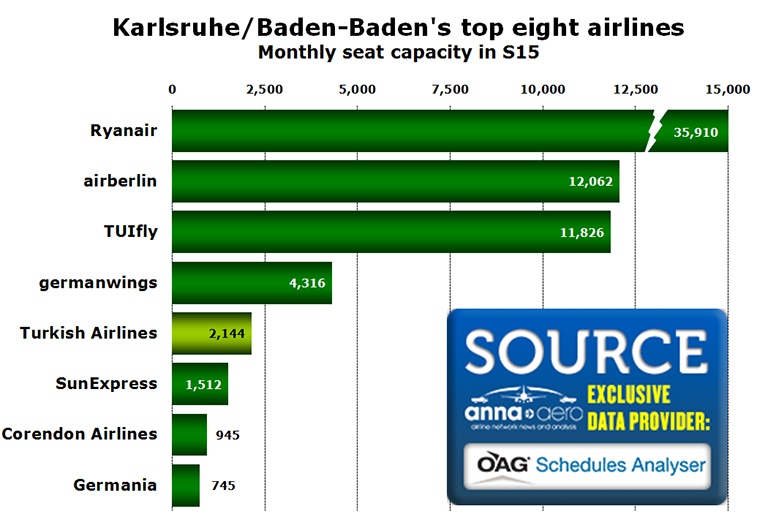 This summer, Karlsruhe/Baden-Baden will be served by eight carriers, with Ryanair being the most dominant, occupying 48% of seat capacity. The only national carrier to serve the airport is Turkish Airlines with its service to Istanbul Atatürk. Although the airport has seen the introduction of a new carrier, and other airlines increasing operations, one that is showing a decline in seat capacity is airberlin. This year, the carrier has reduced its capacity by 20%, a result of the airline shrinking its services on the route to Berlin Tegel, resulting in a loss of over 30,000 seats. However it still remains the second most popular route this summer from Karlsruhe/Baden-Baden in relation to monthly seat capacity. Nonetheless, the carrier has also reduced capacity to Palma de Mallorca by -2.2%, the airport’s number one route this summer.