On 7 July, Sudan Airways launched a new thrice-weekly service from Khartoum to Abu Dhabi. The route faces direct competition from Etihad Airways which also operates on the city pair. Currently Sudan has 10 commercial airports, with Khartoum being the largest.

In 2011, Sudan was the biggest country in Africa, until South Sudan broke way to form its own nation. One of the favourite places for anna.aero’s data elves to visit in Sudan is Khartoum. The country’s capital defies expectations, with excellent museums, fascinating souqs and Nile-side views. While the nation’s economy is seeing development in various sectors, it is also seeing expansion in its aviation industry, with the country showing a growth in the sector for the first time since South Sudan’s independence. 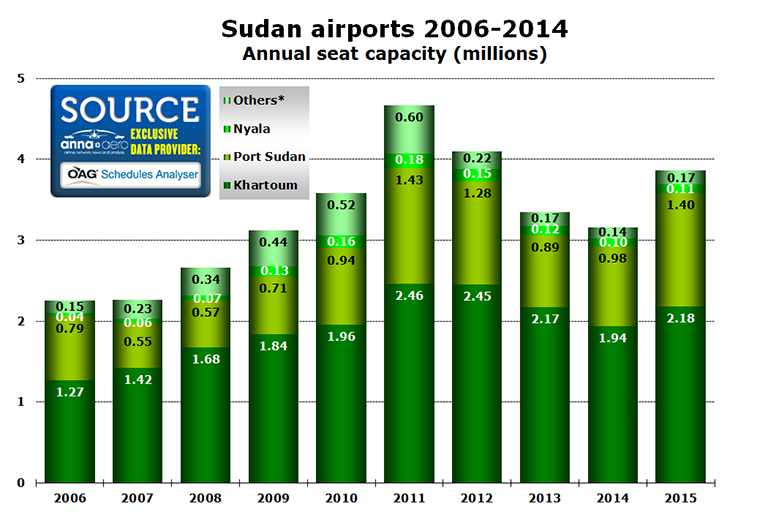 Source: OAG Schedules Analyser data. *Until 2011, Juba figures were also included as South Sudan was not yet independent.

Capacity is growing once again

Khartoum is Sudan’s busiest and largest airport, which is of no surprise as 6.5 million of the nation’s 37 million population live in the city. Khartoum is showing an annual seat capacity growth of 13% for 2015. The capacity in Sudan has seen noticeable increases in annual seat availability, with the average rate of seat capacity growth being 13% annually between 2006 and 2011. However, as a result of South Sudan gaining independence on 9 July 2011, Sudan’s expanding aviation market reversed, with 2012 and 2013 figures showing declines of -14% and -22% respectively. Despite this, the country is showing a rise in capacity once again, with 2015 showing an 18% surge in seats available compared to the figure of 2014. 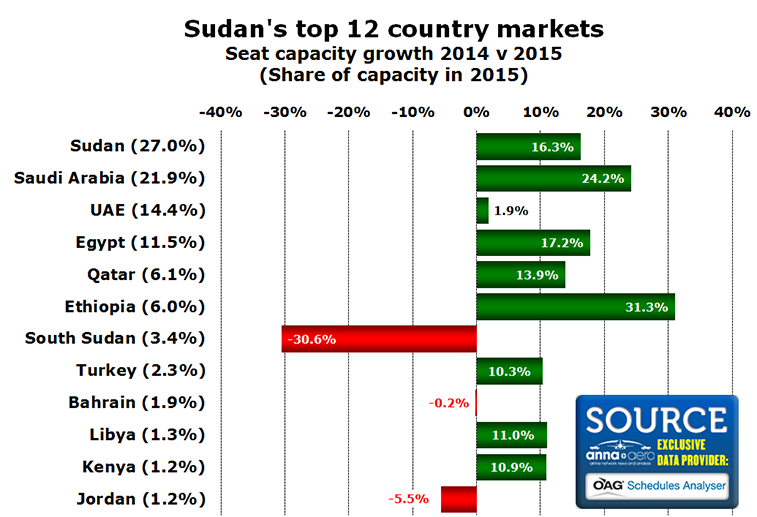 The largest country market to develop in 2015 was Ethiopia, with seat capacity growing just over 31% in 2015. The market seeing the biggest decline in capacity was that to South Sudan, with the city pair between Khartoum and Juba this year seeing a loss of nearly 27,000 seats when compared to 2014. The largest carrier on this sector is Nova Airways, which has increased its capacity share on the 1,197-kilometre airport pair from 39% in 2014 to 50% in 2015. The route has also seen the loss of Marsland Aviation, which last year occupied 10% of available seat capacity between the two cities. Despite the UAE seeing a growth in seat capacity of 1.9%, both MEB3 carriers Emirates and Etihad Airways have reduced capacity, with the former showing a reduction of -34% in available seats for 2015, while the Abu Dhabi-based airline is showing a marginal reduction of -1.2%. Fellow MEB3 carrier Qatar Airways on the other hand is showing a growth of 14% in seat capacity. The biggest growing carrier in the Sudan to UAE country market pair is flydubai, which is showing an increase of just over 10%. The LCC serves two cities in Sudan from Dubai, the capital Khartoum, and Port Sudan. The start of Sudan Airways’ thrice-weekly connection between Khartoum and Abu Dhabi on 7 July will have also have helped to mitigate some of the lost annual seat offer between Sudan and the UAE. 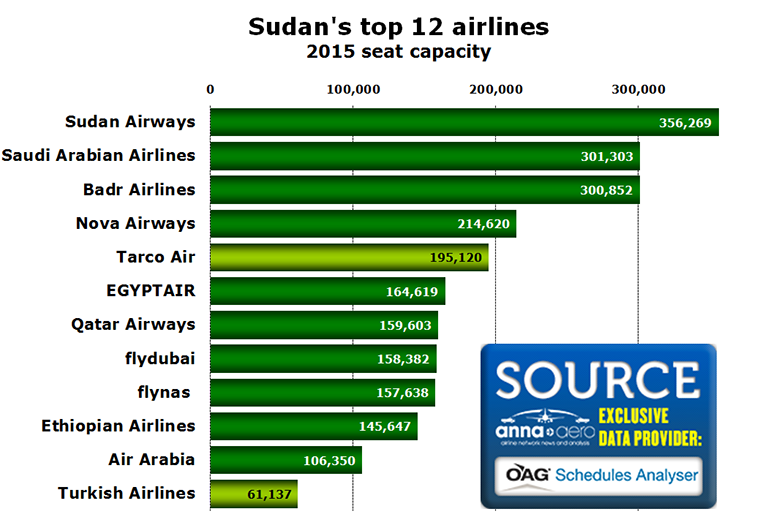 This year national carrier Sudan Airways became the number one carrier once again, showing a seat capacity growth of 22% when compared to 2014. The last time the carrier was number one was back in 2011. It overtakes Badr Airlines, which is third this year in terms of seat capacity. The airline recording the biggest growth is Ethiopian Airlines, showing a seat capacity increase of 37% on its services to Addis Ababa. Two airlines to leave the top 12 airlines in 2015 are Emirates and Marsland Aviation. They have been replaced by Tarco Air and Turkish Airlines (both highlighted in light green). The only airline in the top 12 to reduce capacity was Badr Airlines, which has cut available seats in 2015 by 10%. Tarco Air, Sudan’s fifth largest carrier in 2015, will operate services to five destinations from its Khartoum hub including Cairo, Geneina, Juba, Port Sudan and Nyala.