Tajikistan reports a decrease in annual seat capacity despite Dushanbe showing a rise of 18.3% On 3 September 2014, Tajikistan’s President, Emomali Rahmon opened the brand new terminal at Dushanbe Airport. The new facility is capable of handling up to 1.2 million passengers a year, and has allowed Tajikistan to meet the latest international standards of aviation. The first commercial passengers flew from the new terminal in November.

Tajikistan is one of the world’s newest countries, after gaining full independence in 1991. It is also the smallest nation in Central Asia, covering just 143,100 square kilometres – about the same size as Hungary. It’s known to be a popular location for mountaineers, and it’s of no surprise when you witness the wonders of the country’s breath-taking views from the Pamir Mountains. Tajikistan is also well-located geographically, being centred in between three of the four BRIC countries – namely Russia, India and China. anna.aero has never been to Tajikistan, but when the opportunity comes, there will be the option of four commercial airports that the data elves will be able to fly into (according to OAG Schedules Analyser data for August 2015). The one that will most likely be their first destination is Dushanbe, Tajikistan’s capital ‒ an airport that occupies 61% of annual seat capacity, up from the 49% it commanded in 2014. 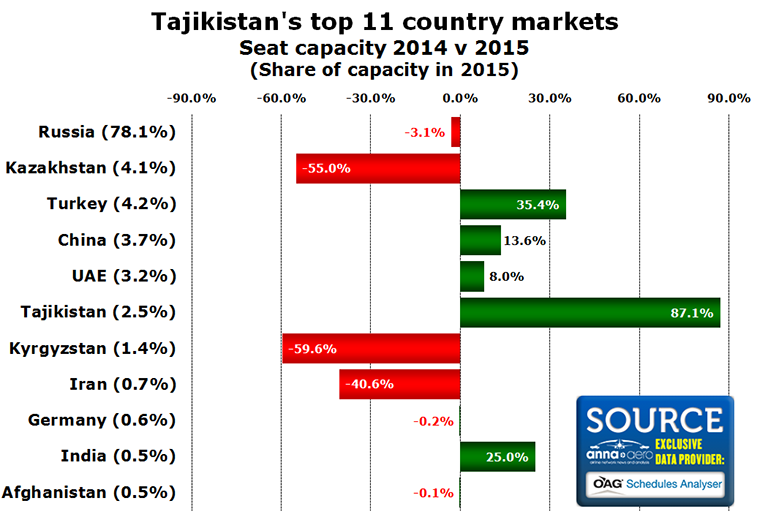 Despite seeing a reduction of just over 34,000 seats compared to last year, Russia is still the dominant market for services out of Tajikistan. In fact, of the 50 routes that operate from Tajikistan, 35 are on services to Russia. It is also the only country market where all four of Tajikistan’s airports are operated to, with Qurghonteppa only having one sole service that operates to Moscow Domodedovo. What is interesting to note is that the fastest growing market is the country’s domestic one, showing that one of the major changes in the country’s route network is the link connecting the two largest cities in Tajikistan, Dushanbe and Khujand. Somon Air, the first private airline in Tajikistan, is the sole carrier on the 200-kilometre sector, which operates thrice-weekly using the airline’s 737-300s. The airline started the route on 30 October last year according to OAG Schedules Analyser data, initially with a twice-weekly service. 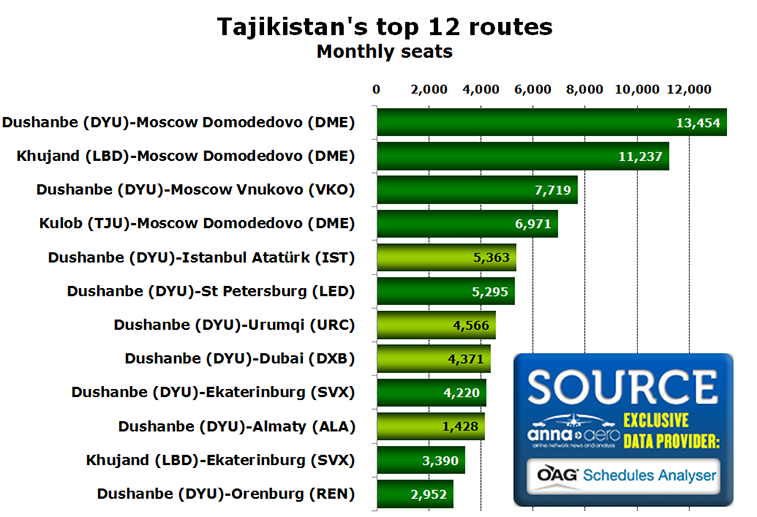 As identified, Russia is the number one market from Tajikistan, however it is a country pair that has seen rises and declines. As shown, eight of the top 12 routes out of the country are to Russia, with only four being connections to cities in other countries (highlighted in light green). However, last year’s number one route from Kulob to Moscow Domodedovo is fourth this year, showing a decrease in seat capacity of -43%. This has allowed the 2,960-kilometre airport pair of Dushanbe to Moscow Domodedovo to climb to the number one spot, a result of nearly 5,500 extra seats being offered between the airports each month. This also highlights the changes being seen in the country’s route network, with the focus of international services being from Dushanbe.

This year, Turkish Airlines has increased seat capacity on its service to Dushanbe by 27%, allowing for the route from Istanbul Atatürk to become the country’s fifth largest. From 3 August, it will add Khujand to its route network from Atatürk, becoming the airline’s second destination in Tajikistan, and its 277th globally. With Russian airlines reducing capacity to Khujand, this could be an opportunity to gain access in the market for onward connections from its Istanbul hub. The result means that the airline will be the sixth largest in Tajikistan for 2015, climbing over half way up the leader board from 14th last year. With no MEB3 currently serving Tajikistan (although Emirates’ sister LCC flydubai does), this could be a country that Emirates, Etihad Airways and Qatar Airways should consider connecting to their respective hubs if they want to be able to compete with Turkish’s global connectivity superiority, as made evident by the recent analysis done by anna.aero identifying the top airline hubs around the world. 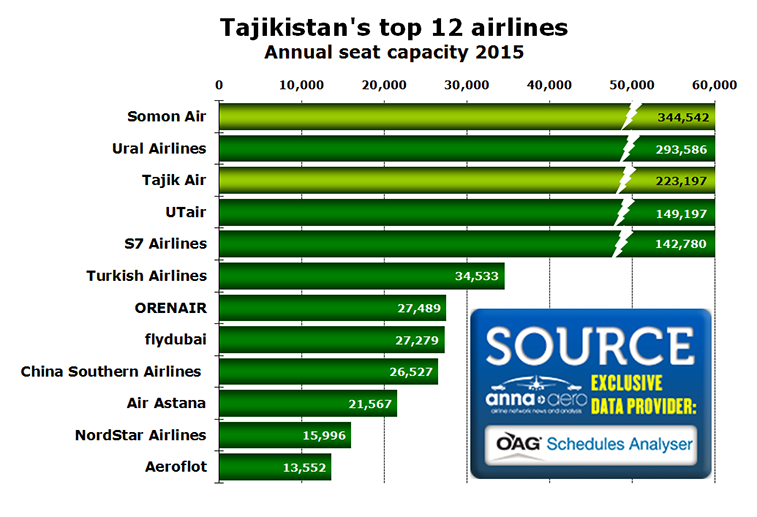 New to the number one position as the top airline in Tajikistan is Somon Air. The carrier has increased capacity on its services from Dushanbe by 19% compared to last year, when it was the second biggest carrier after Ural Airlines, which is now placed in the #2 spot for 2015. This year, Somon Air will operate 26 routes, with 14 operating from Dushanbe, and 12 from Khujand. Tajikistan’s national carrier, Tajik Air, is also reporting a rise in seat capacity for 2015, up 31% on 2014. Although Russia is the #1 country market, one Russian carrier showing why the seat capacity is down this year is S7 Airlines (recently analysed by anna.aero), which is displaying a decrease of -9.4% in seats compared to last year.