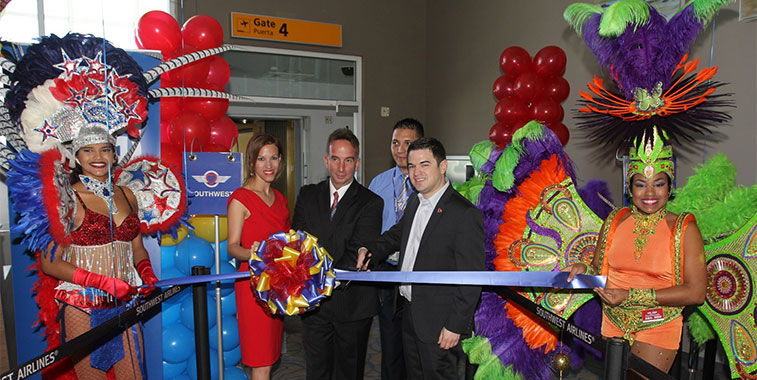 Southwest Airlines has been expanding its international network rapidly in the last 12 months. Back in March the airline celebrated the launch of services from Houston Hobby to Aruba. It also serves the airport from its bases at Baltimore/Washington and Orlando.

According to IATA’s Airlines Financial Monitor (May-June 2015) North American airlines (predominantly those in the US) notched up an impressive operating profit of $5.86 billion during the first quarter of 2015, up from $1.92 billion in the same period of 2014. This represents well over half of the $9.26 billion operating profit for the sample of 81 airlines in IATA’s analysis across the world. It is also worth highlighting that in the same report a table of airline load factors by region shows that North American carriers have reported average load factors in the first five months of 2015 of 82.3%, notably higher than carriers in the Latin America (79.5%), Europe (78.9%), Asia-Pacific (78.1%) and Middle East (77.5%).

Passenger data from the US DoT Bureau of Transportation Statistics shows that in the first four months of 2015 scheduled domestic enplanements are up 3.7%. In 2014 as a whole domestic enplanements were up 2.7% to 662.8 million, suggesting that capacity growth constraint has played a significant role in improving the profitability of the industry as a whole in the US. Last year’s figure is still some way short of the annual record, set in 2007, when there were just over 679 million domestic enplanements. 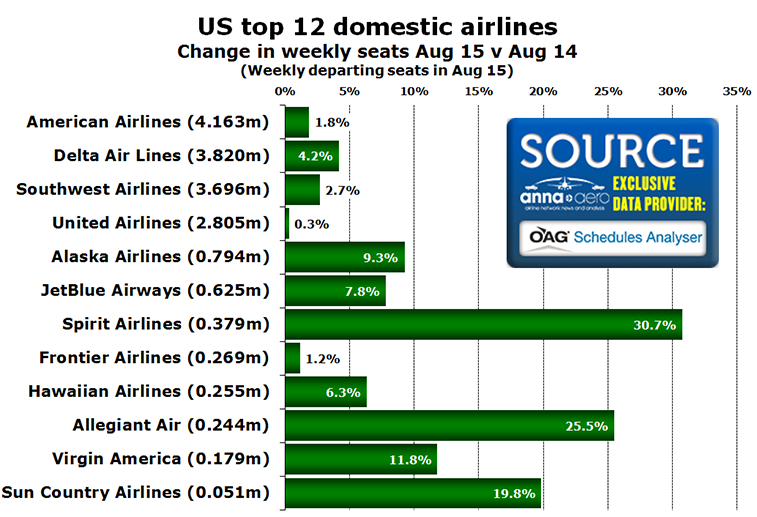 Source: OAG Schedules Analyser for w/c 3 August 2015 and w/c 4 August 2014. American Airlines figures include those of US Airways in both years.

Although full integration of US Airways into American Airlines is still not complete (though it should be by the end of 2015) we have combined American Airlines and US Airways figures together in our analysis, resulting in the new American Airlines being the biggest US domestic airline based on weekly seat capacity this August. All of the top 12 domestic airlines are apparently growing, even if only very modestly in the case of United Airlines (+0.3%). None of the four biggest airlines are growing seat capacity by more than 5%. In the second tier of US carriers the ULCCs Allegiant Air (+25.5%) and Spirit Airlines (+30.7%) are helping to drive an overall seat capacity increase of just under 4%.

International seats to/from US up 6% this summer

While the domestic market shows signs of rising growth rates, seat capacity on international flights from the US this August is up 6.0%, around three percentage points less than last summer. Of the top 16 airlines to serve the US market (as measured in weekly seats), three are indicating a small reduction in seat capacity. Six of the top 16 airlines are reporting double-digit growth, though only one of these is a US carrier. Southwest Airlines has been rapidly expanding its international network and now ranks 12th. Of the other five fast-growing airlines two are based in Mexico (Aeromexico and Volaris), and one each in Canada (Air Canada), UAE (Emirates) and UK (Virgin Atlantic Airways). 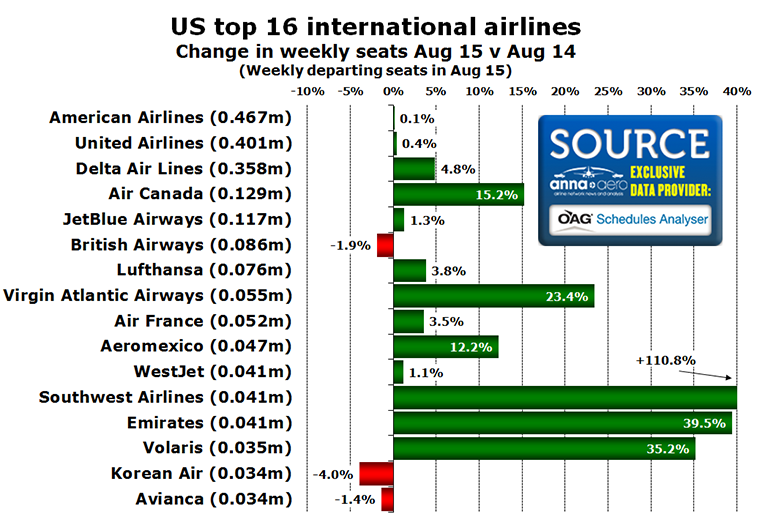 Source: OAG Schedules Analyser for w/c 3 August 2015 and w/c 4 August 2014. American Airlines figures include those of US Airways in both years.

Virgin Atlantic’s growth can be attributed to its new part-owner, Delta Air Lines, which has adjusted the UK carrier’s growth focus in the direction of the US, helped by the recent launch of new service to Detroit. Emirates continues to climb the rankings thanks to 40% growth, not driven by any new routes, but rather frequency increases on its New York JFK and Seattle-Tacoma services and an increase in average aircraft size. 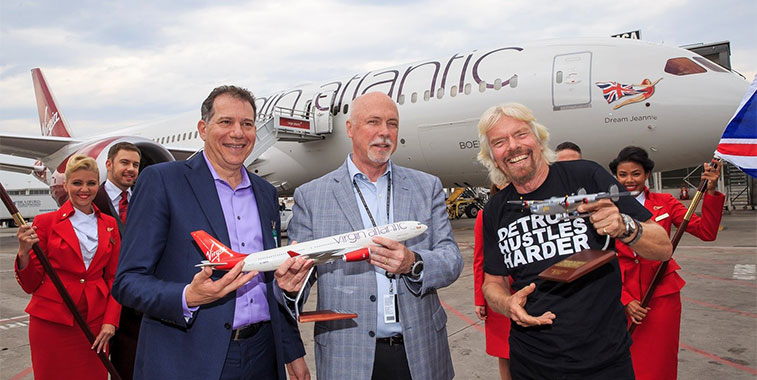 On 1 June Virgin Atlantic Airways launched daily flights from London Heathrow to Detroit, its 10th US destination. This has helped the carrier to increase seat capacity to the US by over 20% compared with last August. It now ranks eighth among foreign carriers serving the US market, having overtaken Air France since last summer.