Asiana Airlines competes head-to-head with Korean Air on almost 50 routes; Rome is newest route with Astana to launch on 8 August 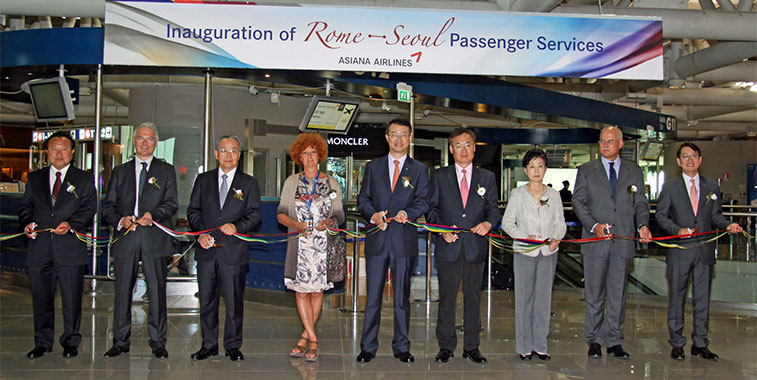 Asiana Airlines’ most recent new route launch was to Rome Fiumicino, a service that started on 30 June. This new service will face direct competition from both Alitalia and Korean Air. Out of the 79 routes Asiana serves non-stop from Seoul Incheon it faces head-to-head competition from at least two carriers on 43 of them, including Rome.

Asiana Airlines remains the second biggest carrier in South Korea after Korean Air. According to the airline’s latest quarterly performance report, at the end of March 2015 the Star Alliance member’s fleet comprised 73 passenger aircraft; 33 narrow-body A320-series aircraft (A320s and A321s), and 40 wide-body aircraft comprising 17 Airbus aircraft (two A380s and 15 A330s) and 23 Boeing aircraft (12 777s, seven 767s and four 747s). Since then, additional A380s have been delivered to the airline in May and June bringing the fleet to four aircraft. They are currently used on flights to Bangkok, Los Angeles and New York JFK.

The airline’s main base of operation is Seoul Incheon Airport from where it operates non-stop to 79 destinations, of which only one (Jeju) is a domestic route. Based on OAG data for the first week of August Asiana ranks as the 61st biggest airline in the world as measured by weekly seat capacity, moving up to 39th if we use ASKs (Available Seat Kilometres) as our metric. Using ASKs, which takes into account distance flown as well as total seat capacity, five of the airline’s top seven routes are to the US (shown in light green), with Los Angeles beating New York JFK to the top position. 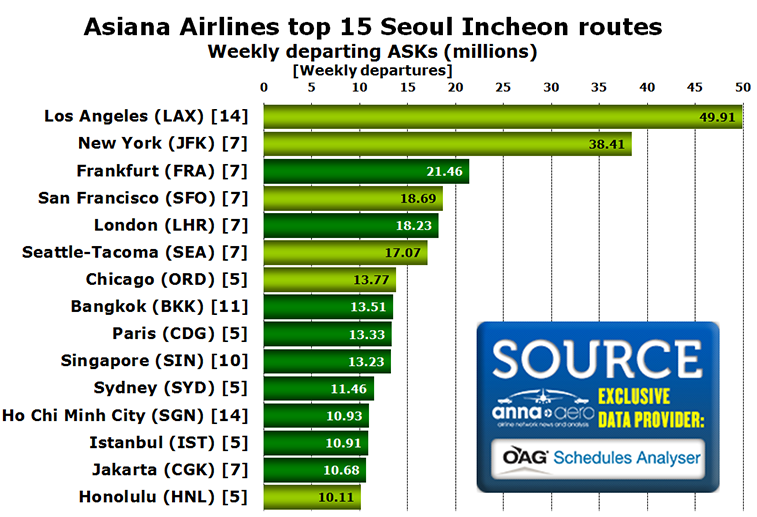 According to the airline’s most recent quarterly financial report (for 2015 Q1) US routes account for 17.8% of the airline’s revenues. This is beaten by the 18.9% of revenues on Chinese routes (it serves 23 destinations in China from Seoul Incheon), and south-east Asian routes which account for one-quarter of all passenger revenue. Routes to Japan generate a further 14%, European routes 9%, while domestic routes only account for 8% of revenues.

At Seoul Incheon, Korean Air is the leading carrier serving almost 100 destinations with non-stop flights (making it the fourth best connected airline hub in Asia) and accounting for 33% of weekly departing seats at the airport. Asiana’s services to almost 80 destinations give it a 24% share of seat capacity at the airport. Not surprisingly, the two carriers compete head-to-head on a significant number of routes, 49 in all. However, Asiana also competes against other carriers on a significant number of routes.

On only 14 of the 79 destinations served from Seoul Incheon does Asiana not face head-to-head competition from at least one other airline, and these routes only represent just over 3% of the airline’s ASKs from the airport. Asiana’s two biggest monopoly routes in terms of ASKs are Delhi and Jakarta which account for over half of the uncontested ASKs. On 22 routes Asiana faces just one carrier, while on 23 routes the level of competition increases to two carriers. On the remaining 20 routes there are at least three carriers competing directly, with the Hong Kong route having the highest level of competition at nine carriers. 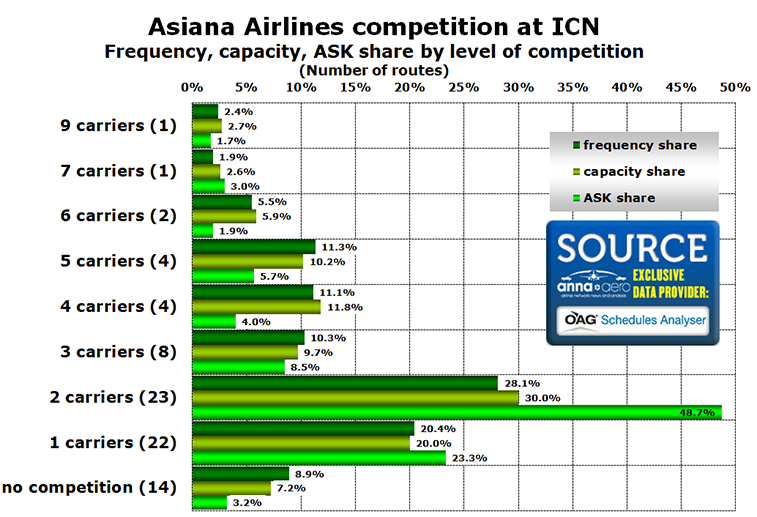 Asiana’s most recent new route has been to Rome Fiumicino (launched 30 June) with Astana, the capital of Kazakhstan, set to become the carrier’s newest destination on 8 August. The new weekly (Saturdays) service will complement the existing weekly (Tuesdays) service offered by Air Astana, with whom Asiana has a codeshare arrangement.

Asiana Airlines’ next new route to Astana starts on 8 August. The weekly service will complement the existing weekly service offered by Air Astana on which Asiana codeshares.

#2 in the domestic market

In the South Korean domestic market Asiana also ranks second behind Korean Air, with around 23% of seats and flights. Of the 10 domestic routes operated seven are from Jeju, which includes the high frequency route to Seoul Gimpo, which is served almost 200 times per week in each direction. This single route accounts for half of all Asiana’s domestic flights. Competition on the route is intense with Korean Air offering around 190 weekly flights each way, Jeju Airlines over 150, t’way air 100, Jin Air over 80 and Air Busan 35. Air Busan is the low-cost subsidiary of Asiana. 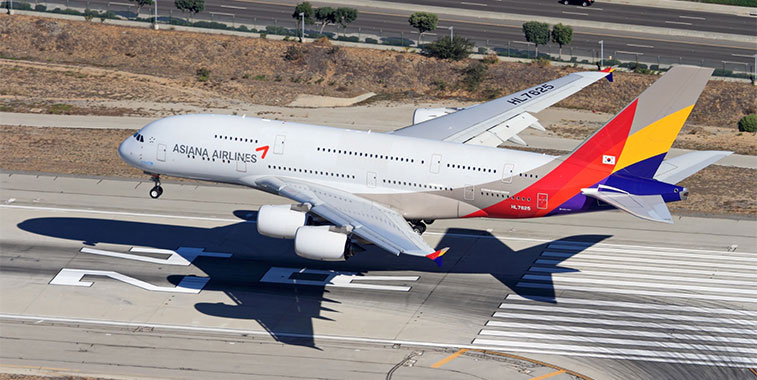 Asiana’s four A380s are configured with 495 seats in three classes. The first two aircraft were delivered in May and July 2014, with the most recent deliveries taking place in May and June of this year. The airline has orders for two additional aircraft. The aircraft are currently used on the US routes to Los Angeles and New York, as well as some Bangkok frequencies.