Qatar Airways turning purple to get IndiGo stake; or will it have to settle for SpiceJet instead? 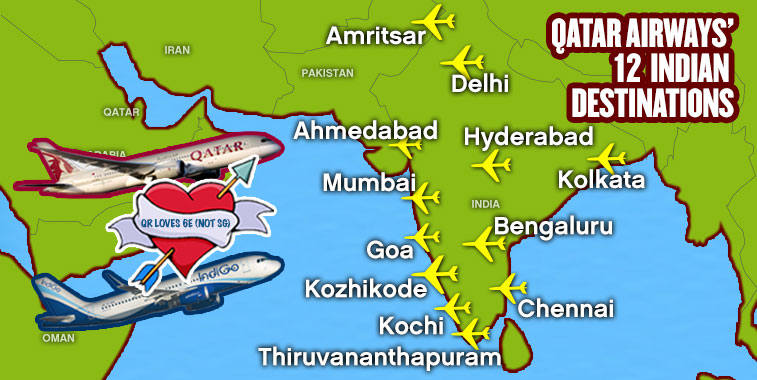 Qatari-Indian love triangle. Like a Shakespearean play, a romantic comedy is playing out in the Middle East and India, with Qatar Airways declaring its love for IndiGo; IndiGo saying its happy alone; and with troubled SpiceJet seemingly happy for any sort of attention. We’ll have to wait until Act IV before know if Qatar Airways will expand its Indian network footprint beyond its existing 12 destinations.

On 28 July, Qatar Airways confirmed that it was only interested in buying a stake (up to 49% if its CEO Akbar Al Baker gets his way) in Guragon-headquartered (just outside Delhi) LCC IndiGo, and not its fellow Indian airline SpiceJet. The following day, a statement on IndiGo’s website seemed to suggest that a stake was not up for sale, with phrases like ‘completely baseless’ and ‘no discussion’ being used in the rhetoric. However, anna.aero’s data elves are too long in the tooth to believe any of that smoke and mirrors treatment, with these public flirtations between airlines more often than not ending up in marriage (and sometimes divorce).

So what would a Qatar Airways and IndiGo wedding mean in terms of the two carriers’ networks, in particular between the Indian and Middle Eastern markets. Interestingly, the Indian LCC does not currently offer any services from India to Qatar Airways’ hub in Doha. However, the LCC does operate 77 weekly frequencies to two other Middle Eastern hubs:

Whether IndiGo will be ‘encouraged’ to shift some of that Dubai capacity to Doha is unclear at this stage (probably unlikely as these routes are often determined by labour and VFR traffic flows), but naturally Qatar Airways and Doha Airport, both of which are part of the Qatar Airways Group, would be seeking to maximise the benefits of any deal that was signed. Any such move would make a small but palpable dent in Dubai’s weekly seat count – IndiGo currently offers 10,500 weekly one-way seats from Dubai, around 1% of the hubs total capacity (w/c 4 August 2015). By comparison, the 1,050 weekly seats IndiGo has available from Muscat does not even reach 1% of the 145,672 total from the Omani capital city. 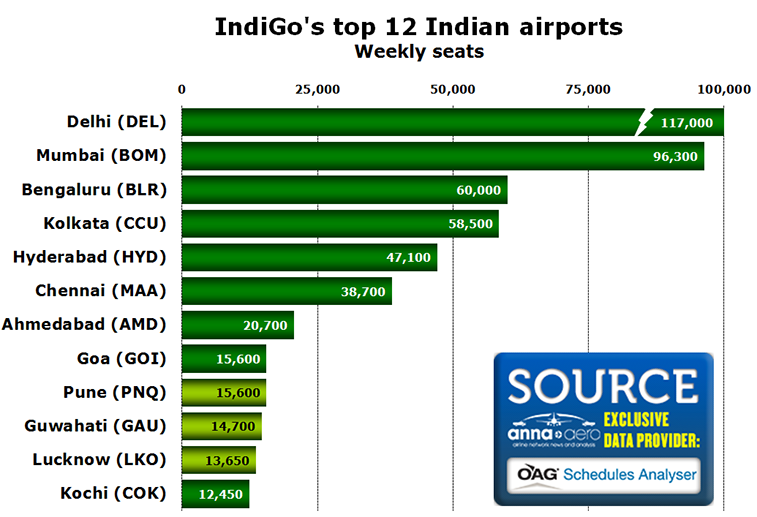 Qatar Airways currently serves 12 destinations in India, many of which are significant operations for IndiGo too. That said, three of the LCC’s biggest operations (as measured by weekly seats) are not flown into by the oneworld carrier – namely Pune, Guwahati and Lucknow (highlighted in light green). The other airports Qatar Airways serves which are not included in IndiGo’s top 12 operations are Amritsar (not served by IndiGo), Thiruvananthapuram (#23 operation for IndiGo) and Kozhikode (#32). The Doha-based airline currently offers 95 weekly services across these dozen destinations, and a weekly seat commitment of 22,208.

Slice of SpiceJet if IndiGo stake proves too spicy?

Should Qatar Airways undertake a volte face and decide to acquire a stake in SpiceJet rather than IndiGo – let’s face it, it wouldn’t be the first time that has happened in this industry – the story is pretty similar at the also Guragon-headquartered carrier. Most of its existing 47 weekly flights and 8,883 weekly seats to the Middle East are also focused on serving Dubai at the moment (89% of flights and seats to the region).

This time it is Pune, Srinagar and Visakhapatnam (highlighted in light green) which are amongst SpiceJet’s most important Indian airports that are currently not on the Qatar Airways network map. However, unlike with IndiGo, Amritsar features in the Indian carrier’s network (at #17 in terms of weekly seats), with Kozhikode at joint 28th, but with Thiruvananthapuram omitted from SpiceJet’s network, but served by Qatar Airways from Doha. 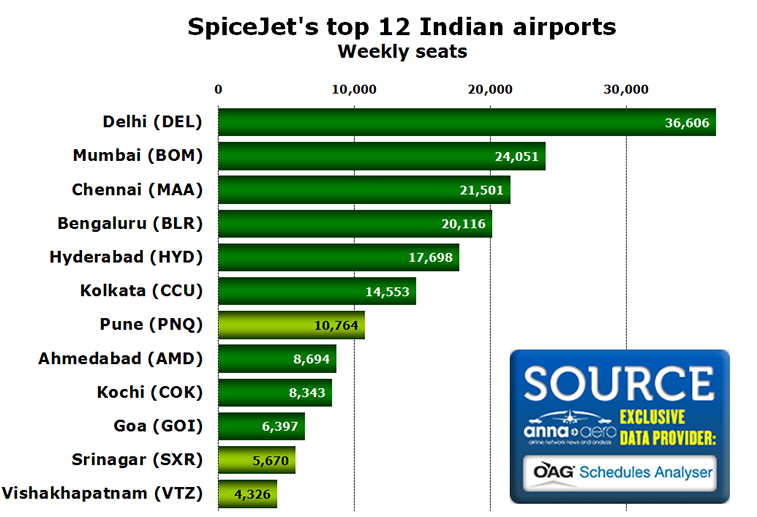 No new routes planned – for now

Having recently started flights to three destinations in Pakistan – Faisalabad, Sialkot, and to Multan this week – as well as Abha in Saudi Arabia (2 September) and Ras Al Khaimah (1 October), its fourth destination in the UAE, planned in the region later this year, there are currently no plans for any additional routes into India from Qatar Airways (according to anna.aero’s New Route Database). Neither IndiGo nor SpiceJet have any plans for any new route launches anywhere for the remainder of 2015, with the former having recently elected on 10 July to add capacity on existing domestic routes like Delhi to Goa (up to five times daily) and Raipur (up to thrice-daily) instead. anna.aero will keep you posted on whether this lack of new route activity changes should a deal go through for either Indian carrier.